Why black lives should matter to the Greek diaspora A young girl holds a sign that reads ‘Black Lives Matter’ as a group of protesters gather to march along Revere Beach Boulevard to peacefully demonstrate about the arrest of George Floyd. Photo: AAP

I have often found that I struggle to find the right words for any number of occasions and reasons. Most of the time, it all seems so meaningless, especially when I’m surrounded by people who have and will say things better than I ever could. And so it has been with the situation of the United States and the brutality of racism that has plagued it since it was first discovered and stolen and raped and plundered.

My sentiments about the US aren’t really a secret. It’s a country that was founded on genocide and built by slavery. How those facts are covered up remains a mystery to me, as does the notion that Francis Scott Key described it as “the land of free.” If he really believed those words, he believed it was true only for whites, especially since in the third verse of his glorified anthem he wrote:

“No refuge could save the hireling and slave
From the terror of flight, or the gloom of the grave:
And the star-spangled banner in triumph doth wave
O’er the land of the free and the home of the brave!”

And I suppose now is a good time to mention Jefferson, the beloved President who lied and said that “all men are created equal.” That’s a strange thing for a man who raped his slave girls and left his own children to grow up in slavery to say.

In March I flew to Greece on a one way ticket…and as much as I tried to avoid it, the happenings in the US were inescapable….primarily with the criminal mishandling of the pandemic that has already killed over one hundred thousand people, and more recently with yet another murder of yet another innocent black human being. And yet again, words escaped me. What am I, a 39-year-old tan male who is basically living my dream life of biking through Greece in an effort to showcase the cycling opportunities that exist here, going to contribute?

And yet, once again, cycling helped create the context I was looking for in order to actually say something meaningful about the continued murders of black people in America, and how it correlates to Greek people and our responsibility as Greeks to stand against that.

READ MORE: ‘There is no excuse for racism,’ says Peter Doukas, ECCNSW Chair

A few days ago I was out on a long ride through the steep mountains in Naxos, Greece. I had stopped at a natural mountain spring to take in the beauty and enjoy the escape that these remarkable places provide. The only sounds were of the spring itself pouring out of the rock and splattering into the pool below…the wind blowing through the branches of the large oak next to me, and the clanging of bells from the mountain goats that were wandering about the mountainside. 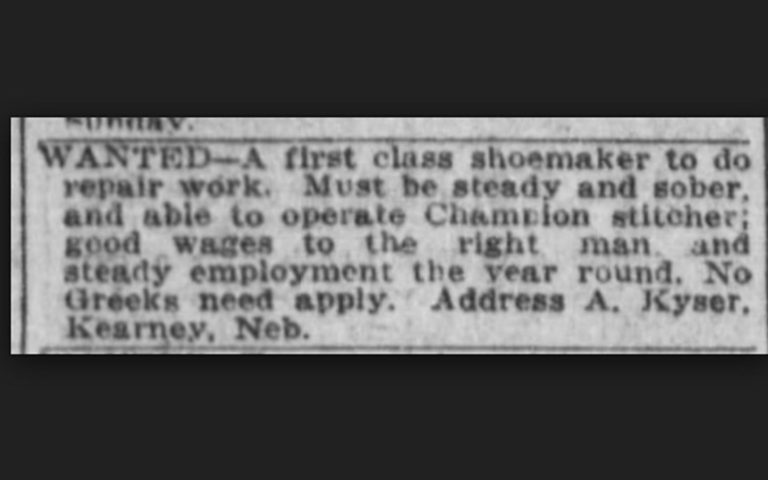 As I was about to keep riding, a herd of goats came down the path that led to the area I was in. Behind them were two shepherds, a husband and wife. Naturally, they were curious about what I was doing up there and where I was from. Clearly I wasn’t a local…but I spoke the language fluently. And the first thing they asked me when I told them I was born and raised in the US was, “What is wrong with Donald Trump?” And then, they asked me why the police in America were always killing black people. I was almost in shock.

Let’s pause for a moment just to appreciate a few things. First of all…shepherds are almost by nature simple people….close to nature and to animals. I doubt they were educated beyond high school (at best), and surely they were not versed in American history. And despite that, they had the cognisance to understand that there is in fact, something very wrong with the President of the United States. The compassion that they felt for America’s black people was heart warming to me. Their inability to comprehend the evil that follows and plagues those people shows me that in their simplicity, they have a very basic understanding of right and wrong. It’s mother-fucking wrong to murder innocent people. And yet there’s those in America who will argue. Think about that for a second…there are black people in America literally saying “don’t kill us,” and there’s people on the other side starting a response with “Yeah but….”

Hours later, in another village, I was sitting at a small cafe where again, I had the pleasure of talking to some old men, and they too were immediately curious about what kind of a country allowed the continued murder of innocent people. In Greece, the news is much more graphic and less censored than it is in America, and so people here were actually witnesses to the murder itself, in all of its graphic and horrible brutality. “I couldn’t believe what I was watching,” one man said….. “I still shudder at that poor man dying underneath that cop’s knee.”

And once again, I was humbled by the simplicity of these people….so far away from America, so completely removed from bigotry and racism and hatred that America was founded on, and yet recognising what they watched for for exactly what it was: murder.

Anyone who has spent any time with me will know that I love Greece more than just about anything else in the world. And while certainly not all Greeks are as upright as these elders I met today, there is much to be said about the Greek culture and its recognition all over the world for hospitality and goodness and “filotimo,” which translates to “love of honour.” It’s honourable to do what’s right….to be good…to be a beacon of hope and to lead others down an honourable path.

It’s not enough to simply stand for what is right. It is imperative that we actively stand against what is wrong. And so a message to Greeks out there who boast about their “Greekness” while having no sense of history: learn something. A great place to start is this article by Gregory Pappas on the forgotten history of the Klan vs Americans of Greek heritage.

READ MORE: Pro-Trump Greeks. Not as far-fetched an idea as it seems

It tells of the bigotry that Greek people faced in America….Greek immigrants….the grandparents of my generation. Greek people on the right side of history were united with blacks in America against hatred and bigotry and racism…not just because (to a much lesser degree) Greeks faced similar brutalities, but also because it was wrong. And so I must say…to you sellout Greeks who like to make excuses like, “my grandparents immigrated here the right way” or who like to talk about how Greeks have nothing in common with those animals when you’re talking about black people…you are my enemy…not just in my fight against what is wrong, but also in your traitorous beliefs against what being Greek stands for. To those of you who like to ejaculate verbally about President Trump and how he is good for Greece and good for America…you are my enemy. Perhaps you feel important in your self-appointed position of ambassador for Greek Americans…but to me you are the left-over shit that coats your inner ass cheeks when you haven’t wiped enough. And with your shit, you stain me. It’s impossible to not take it personally. You betray the true values that Greeks are known for. You are like the traitorous Greeks out there who think that an occupied Greece helped establish order. And for the record, back when your grandparents were immigrating to the US, the laws regarding immigration were vastly different. If you wanted to come to America…you were getting in. Period. So fuck off with your “the right way” bullshit that you weren’t even there to witness. You know nothing about it.

It took me a long time to get to this point in my thinking, with multiple missteps along the way. And looking back at those missteps I can say that bigotry is lazy. It’s the easy way to think. It’s easier to dismiss an entire group of people as animals or as subhuman than it is to take a moment and learn about them. I found the same experiences when I was in Lesvos a few years ago helping with the refugee crisis. It’s easier, from the comfort of your living room to dismiss an entire group of people as invaders than it is to think about the complexities of war and cross cultural psychology, and to take a moment to get to know someone and understand a thing about them and their humanity.

One last thing for now….I’ve often thought about the similarities between Greek people and black people. And again, in stumbling along the way I used to think we had nothing in common…but Jesus Christ, history aside (400 years of slavery/occupation for starters) take every stereotype about black people….and it’s the same for Greeks.

The word “kleftes,” which translates into thieves, is ingrained and glorified in Greek culture because as oppressed people, we would steal from the Turks. That kind of banditry is embraced…so if you want to call black people(or any other oppressed person for desperation) thieves, you’re a racist.

“They’re loud.”
Have you seen “My Big Fat Greek Wedding” Have you been around a gaggle of Greek women? Have you seen the men at the coffee shop argue over, LITERALLY ANYTHING?!! I’m not saying you have to like it…because I don’t…at all. I fucking hate noise, period. But it’s not a trait exclusive to black people. Or Greeks. Persians and Italians…I see you!

And on a lighter note…the whole “watermelon thing.” Dude…watermelon is delicious and pretty much the epitome of Greek summer. Step the fuck off.

I began this post with some criticism about the US. And so to end it, I want to say that in the history of the world, America is a toddler compared to the older countries around it. Somehow Canada faired a whole lot better…but that’s the besides the point. America is still stumbling as it learns how to stand. It’s still pooping on the floor and smearing it on the wall. But there’s a responsibility of people there to make it sure she stands up right…on her own, and no longer on the backs and throats of the people propping her up. Do better. Be better. And for us Greeks…it’s practically our responsibility to help our brothers and sisters in life. It’s in our culture. Do not betray it by betraying them.