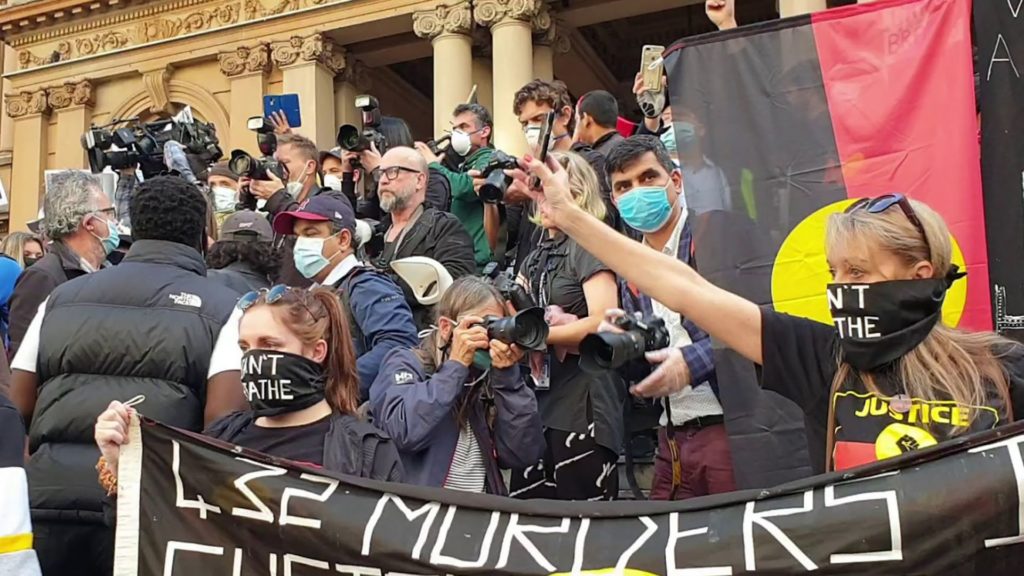 Demonstrators gather outside the Sydney Town Hall during a mass protest sparked by the death of African-American George Floyd who died in police custody in Minneapolis, United States, on 25 May. Some of the 3,000 people who joined the rally in Sydney also protested against the mistreatment and marginalisation of Australia’s Aboriginal people. Photo: AAP

Last weekend thousands of people took to the streets in Australia’s cities in support of the Black Lives Matter campaign that has arisen in the wake of Mr Floyd’s death, but also to draw attention to the deaths of Aboriginal people in police detention. They defied court injunctions prohibiting mass gatherings in view of the COVID-19 measures in place in the nation.

American born Wayne McDaniel, came to play basketball in Australia in 1983 and became one of the league’s top scorers, attended the march in Sydney. He told Neos Kosmos he had been impressed at the turnout.

“I attended on Saturday and thousands were there. There was diversity of people indigenous, European background and people from the Mediterranean. It was inspiring in a lot of ways.

“I did not know there was such an outpouring (of support) in Greece, particularly as it had so many problems of its own,” said Mr McDaniel.

Another former basketballer, Terrance Rone, also American-born, said he had been surprised at the big turnout. He had not been sure if the event would take place because of the COVID-19 restriction.

He said however that it would take more than protests for things to change in the US.

“For now it is wait and see to see if change really happens in court –what charges are laid against the officers and if they are convicted. The change has to happen in the US. Outside pressure will not change anything unless people taken an economic stance.

“Historically financial boycotts, such as the busy boycotts, worked because the loss of finance is what is best understood,” Mr Rone said.

READ MORE: Athens protesters clash with police in Black Lives Matter rally outside the US embassy

Mr McDaniel said the presidential elections in November offered a real opportunity to bring about change. He said in the 2016 elections 46 percent of Americans who could have voted did not and this had made a big difference in the outcome.

“Voting (in this year’s election) is essential. The voters can petition their politicians for change. The system as weak and fractured as it is the one that can bring out real change.,” said Mr McDaniel.

He said a number of factors had led to the “perfect storm” of unrest following the death of George Floyd. He said the failed leadership in the response to COVID-19, loss of jobs had all contributed to the situation.

He added that the police in the US were given protections in the name of justice and public order which had made them unaccountable and that this needed to change.

“The prison system is an industrial complex that is built on profit. Many first offenders are in prison not for committing a crime but because they cannot afford to pail the bail. The rates of incarceration are out of control,” he said.

READ MORE: Why black lives should matter to the Greek diaspora