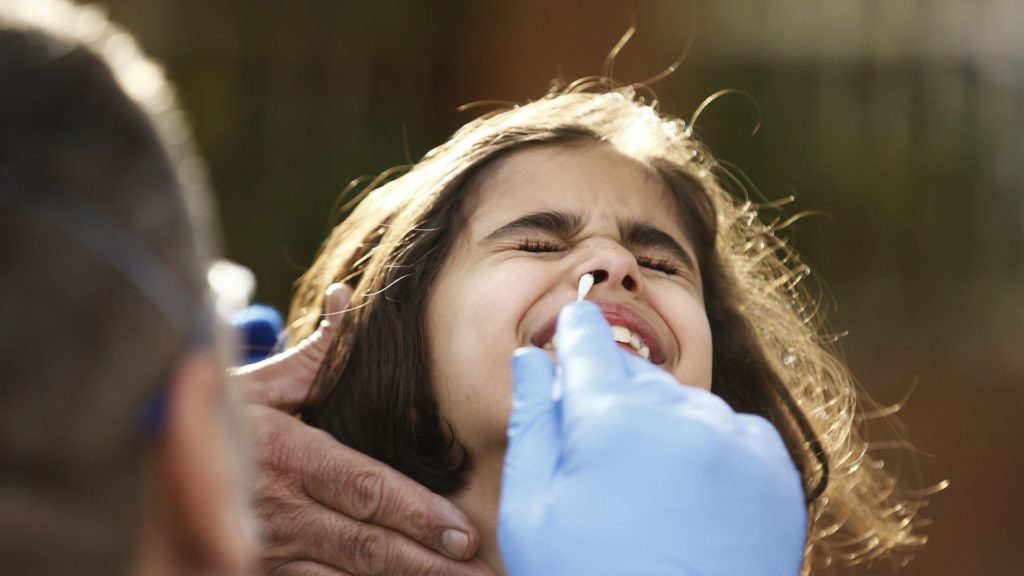 A person receives a COVID19 test in Broadmeadows after Victoria State Government Health and Human Services people knock on doors to check if people have any symptoms. Photo: AAP

Despite months of stringent restrictions, perhaps the toughest in Australia, Victoria is behind the eighth ball when it comes to controlling COVID-19 with a resurgence of infections following the easing of restrictions. The mood shifted last Saturday when Victoria’s Premier Daniel Andrews announced 25 new cases, the highest total in two months which came just a fortnight after a tally of no coronavirus cases. Since then, the figures have been climbing.

Victoria University Researcher Dr Vasso Apostolopoulos told Neos Kosmos it is not Victoria that is failing, but Melbourne – “a densely populated area with a large multiethnic community” – which is lagging behind in efforts to quash COVID-19. “The main message from the health community has not reached multilingual communities efficiently,” she said, adding that there is plenty of misinformation circulating around non-English speaking communities which get much information from social media. She states that there weren’t enough pamphlets distributed in these languages to combat the messages on social media that COVID-19 is “fake”.

“There is poor understanding of the social distancing ‘at all times’,” Dr Apostolopoulos said. “There is trust that the person you love is safe. Hence, the current family clusters. Tracing people starts with the first contact and leaves out close contact, that can potentially miss a few cases which then become a cluster.”

She warns that businesses as well are not as informed as they need to be. In many instances “we see many which have crowds that aren’t self-distancing outside the business while they wait” and she warns that “other states had very few (cases) when restrictions were relaxed. However in Melbourne there were active clusters at the time” which made the difference.

In response to the latest outbreak, Premier Andrews limited the numbers of guests to people’s homes as more than half of the cases since April had been spread during visits, but he stopped short of backtracking to earlier social-distancing positions – to do so would be admitting that his government had relaxed them too soon and would further crush businesses. On Thursday morning, after further spikes, the premier told Victorians that residents could expect “hundreds and hundreds” of door-knockers inviting residents to come and get a free test regardless of whether they have symptoms. More than 10,000 tests a day would be carried out as part of a Suburban Testing Blitz in areas with the highest number of community transmission cases, whereas the police are back to issuing on-the-spot fines and 1000 military personnel have been called in to help curb transmission.

“Our national strategy has been one of suppression, there was always a risk that there would be more cases and more clusters. We became concerned by the numbers we were seeing in some parts of Victoria in recent days, which is why we have taken action on the advice of our public health experts to slow the spread and boost engagement with those communities,” she said. “The experts tell us that, largely, the numbers are being driven by families – families having big get-togethers and not following the advice around distancing and hygiene. We understand people can feel relaxed at home and let their guard down but we are still in a pandemic and people’s lives are still at risk. That’s why we have had to reduce the number of visitors Victorians can have at their home, delayed the further easing of some restrictions and taken action to boost understanding of the virus and testing in vulnerable communities.”

Dr Apostolopoulos believes that it’s not just testing that will help. We all have a role to play. She said that as a population of 6.5 million people we need to exercise caution. “If one person does not pull their weight, the whole team goes down.”

“We are far from normality, COVID-19 is not over it will be there forever,” she told Neos Kosmos.

“Until a vaccine is developed we need to stay at home and not go to crowded places. Wear a mask, wash hands and keep your distance.”