“I will do away with the watch
And I will get a komboloi,
So I can count the sorrows
and the sighs.
Song “Roloi, Komboloi”, debut singer Grigoris Bithikotsis

Jon Lambousias,42, opened The Komboloi Shop, the first and only komboloi boutique in Melbourne at Eaton Mall, because he wanted to keep the ancient tradition of komboloi-making alive.

“I like to help bring it back,” he told Neos Kosmos.

“Ensuring one of our traditions doesn’t get lost.”

Mr Lambousias said there was an air of mystery around the komboloi that also had a practical purpose.

“There is a mystique to an object that has been around for a long while,” he said. 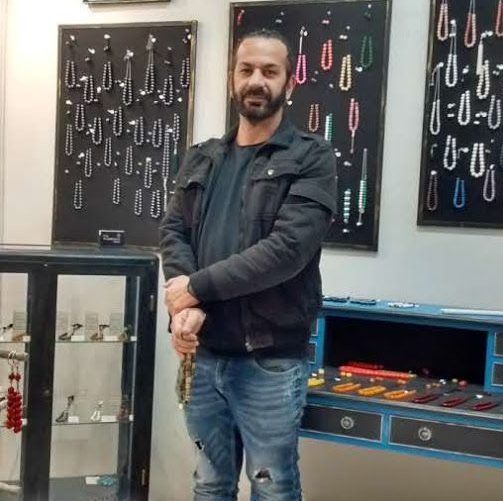 Mr Lambousias shows one of his komboloi.

Mr Lambousias was born and raised in Melbourne to Greek parents. He lives in the Melbourne south-eastern suburb of Oakleigh and has travelled to Greece many times, staying for long periods in Athens.

He opened his boutique komboloi shop in Oakleigh last September. Before that, he had a career in finance for 10 years.

Mr Lambousias said he handmade the komboloi on site and also to order. He has 250 to 300 komboloi on display in his shop.

They range from the novelty komboloi for cars and keyrings, to wall hanging komboloi, bracelets and the most popular, the begleri which is a small skill toy of one or more beads at either end of a short string or fine chain. By contrast, the actual komboloi usually consists of 16 to 20 beads.

There is the exotic yusuri, a black coral from the Mediterranean, as well as bull horn and camel bone from Egypt.

Mr Lambousias said his favourite material was Baltic amber, tree resin from the Baltic Sea eco-region which is millions of years old.

He said the art of making the komboloi was not only an old man’s craft as he saw young people, like him, in Athens make them.

Mr Lambousias said the komboloi was for all age groups to enjoy and encouraged people to experience its unique feel and sound.

“Just swing it around,” he said.

HISTORY OF THE KOMBOLOI

The komboloi has historically been associated with prayer.

The Hindus were the first to string beads together and use them for counting prayers around 700BC.

In the third century in Greece, the monastic community of Mt Athos, was the first place known to have used “beads”. Monks tied knots at intervals on a thick cord to count their prayers.

These “knotted strings” became known as komboskini. They opened the way for the creation of the Greek komboloi.

Now an object of pleasure and not prayer, the modern day komboloi is said to have come about during the Turkish Ottoman occupation of Greece, between 1453 and to 1821.

The komboloi did fall out of favour during various periods after Greek Independence, but it is said to have been revived after the 1920s with the Asia Minor catastrophe that saw the influx of refugees coming to Greece.

The komboloi is now tossed to wile away one’s troubles and time, as well as collected, exhibited, gifted and of course sung about.

How to handle worry beads

There are two ways to ‘play’ with worry beads. The ‘quiet’ method is most appropriate for use indoors as it allows the user to start at one end of the chain of beads and pull each thread forward using the thumb. This is repeated until all beads have been tipped so that the user can start again. The ‘loud’ method is to divide the beads into two groups and to swing them up and forward, making a noise. This is appropriate for outdoor use.