Kerr’s curse, the Gough Whitlam dismissal and the Palace Letters

The release of 211 letters from 1975 to 1976, between the then governor general Sir John Kerr and Buckingham Palace, after a hard-fought court battle by historian Professor Jenny Hocking, reveal collusion between the Palace and Sir John Kerr in the sacking of a democratically elected Labor prime minister Gough Whitlam 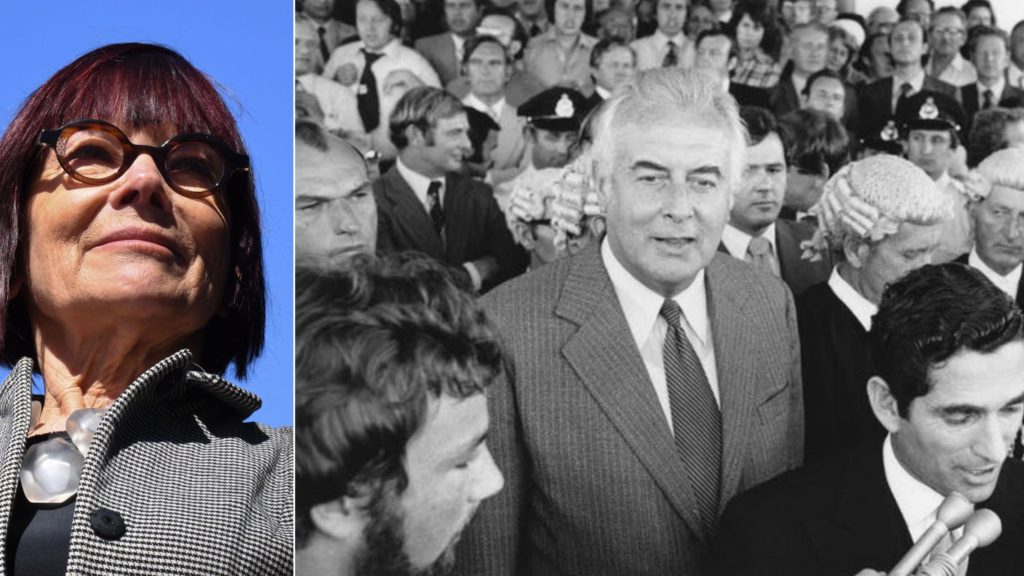 A composite photo of Jenny Hocking (AAP) and Gough Whitlam on 11 November, 1975.

Professor Jenny Hocking fought for two years and won a High Court case this May to have 211 letters between Buckingham Palace and the then governor general, Sir John Kerr, released to the public.

Sir John Kerr dismissed a duly elected Prime Minister Gough Whitlam on 11 November, 1975, after an opposition dominated Senate refused to pass his supply bills. Instead of allowing the Prime Minister to call a half-senate election, the Governor General of Australia did the unprecedented and called up his reserve powers and fired an elected prime minster.

The crisis leading to the governor general’s decision has had a monumental impact in modern Australian politics and has left deep scars on the body politic.

The High Court, six judges to one, ruled that Australians should see the letters regardless of the objections by Buckingham Palace, Government House, the Federal Government and the National Archives of Australia.

“These letters show us that the Palace played a big part in discussing with Kerr the very matters that led him to make the decision he made and frankly I was shocked,” Professor Hocking told Neos Kosmos.

The letters were tightly held under the embargo of the Queen “under lock and key and a vice like grip.”

“That is just an untenable situation for us as an independent nation and the letters were in our own archives in Canberra,” Professor Hocking said.

The Palace went to court over the letters’ release because of the deeper fear that the letters will reignite discussions about whether we ought to be a fully independent Republic according to Professor Hocking.

READ MORE: The big reveal: Jenny Hocking on what the ‘palace letters’ may tell us, finally, about The Dismissal

“These letters are a bombshell they show an intense involvement by the Palace in the politics of a sovereign nation, and they played a key role in the decision that Kerr finally made”

“Royal secrecy is not appropriate for a democratic country, the Palace fears that it will open the floodgates to ordinary people knowing their place in history.”

Professor Hocking says it is an unprecedented event that a statement was issued by Buckingham Palace emphasising that the Queen’s lack of awareness.

“These letters are a bombshell they show an intense involvement by the Palace in the politics of a sovereign nation, and they played a key role in the decision that Kerr finally made,” Professor Hocking said.

The letters disclose more than an official relationship between Sir John Kerr and the Queen’s private secretary Sir Martin Charteris. The discussions extend over strategy, economics even to speculation of what may occur to Sir John Kerr’s job in the event that either Gough Whitlam, or Malcolm Fraser win the 1976 election following the Prime Minister’s dismissal. 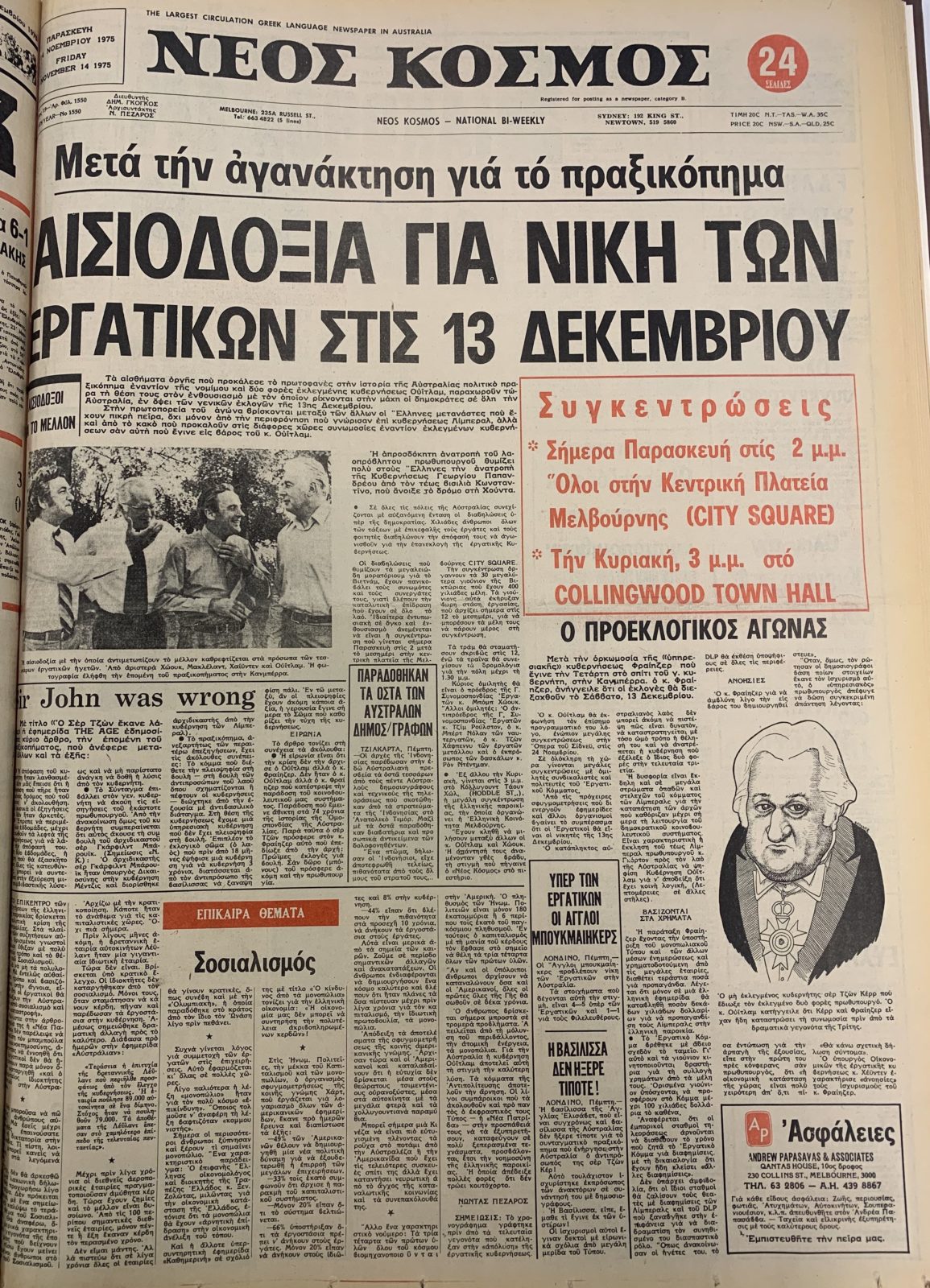 The Queen had a full awareness of the events, if not the actual decision to sack Whitlam until it was made. No letter from her private secretary can be sent without her acknowledgement, or her sighting it.

“It was often said by people who wanted to dispute that the palace letters would show, if anything, that the Queen’s replies would be nothing but a polite ‘thank you Sir John for your letter’, they are anything but.

“It is impossible for Buckingham Palace to now claim as they have overnight [Tuesday] that they had no part in the decision that Sir John Kerr took,” Professor Hocking said.

Professor Hocking calls it astonishing that the discussions through these letters, between the Queen’s private secretary Sir Martin Charteris and the Governor General “is being conducted in secret from the Prime Minister of Australia.”

Professor Hocking believes the letters undermine the convention that the head of the constitutional monarchy, the Queen, is meant to be politically neutral at all times, and above politics.

“What you see in these letters, letter after letter, both from Kerr then more worryingly from the Queen in reply, are detailed discussions about the political situation in Australia,” says the historian.

“What’s deeply concerning is that the Palace engages with Kerr in the lead up to the dismissal and there there’s a lot of discussion about what Kerr could do, there’s even advice from Buckingham Palace about how to interpret sections of our constitution,”Professor Hocking adds.

In one of the letters, the governor general expresses deep concern that Whitlam may be seeking an audience with the Queen to fire him. In response the Queen’s private secretary reassures the Governor General of the Queen’s ‘displeasure’ at the suggestion.

Professor Hocking describes the Queen’s involvement as “constitutionally shocking” as it was clearly established in 1926 that the appointment, or removal of the governor general is a matter only for the prime minister.

“It was often said by people who wanted to dispute that the palace letters would show, if anything, that the Queen’s replies would be nothing but a polite ‘thank you Sir John for your letter’, they are anything but.

“It is impossible for Buckingham Palace to now claim as they have overnight [Tuesday] that they had no part in the decision that Sir John Kerr took.”

Professor Hocking pays less notice to the idea of US interference.

“There was unhappiness in the American security sector over decisions the government had made about Pine Gap, but there is no evidence of active involvement.

“Having said that, I don’t think they are unhappy to see the government go.”

Professor Hocking believes that the Liberal Country Party Coalition – as it was then – could not wait to remove the Labor government from office, as they were not used to having a Labor Government after 23 years of conservative rule.

Malcolm Fraser, who continued to block supply in the Senate, “held his nerve easily” because he knew that the governor general was going to act, according to Professor Hocking. Whitlam during his dismissal. “John Kerr made a disastrous decision to remove the government without warning. He had other options available to him yet he chose not to go down an established and appropriate path.

“That was a terrible decision for him as much as anything else because he never recovered from it,” Professor Hocking said.

For many Greek migrants Whitlam was a secular patron saint. He took migrants seriously. His multicultural policies, his support for a return of democracy in Greece during the 1967-75 Junta and his position on the Turkish invasion of Cyprus in 1974, and his knowledge of Classical Greek and Greek history elevated him in our eyes.  The letters released reignited many Australians’ rage and desire for a republic.

NB: all the letters can be sourced through the National Archives A selection of letters which are finally open to the public.