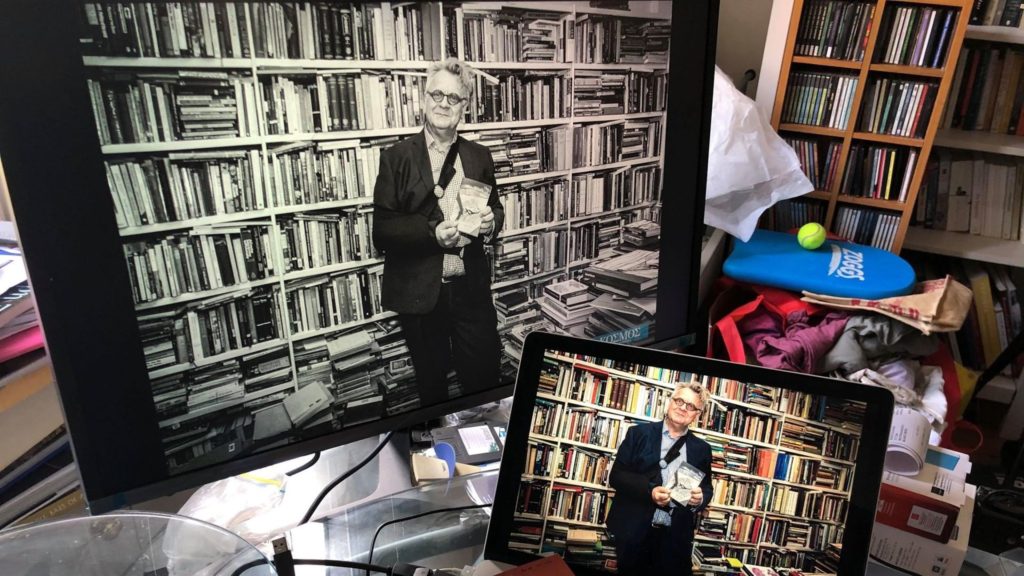 Vrasidas Karalis is known for his work teaching Modern Greek at the University of Sydney where he holds the Sir Nicholas Laurantos Chair in Byzantine and Modern Greek Studies. For decades, he has researched and promoted the Greek language in Australia.

He is is the editor of the Modern Greek Studies Journal of Australia and New Zealand and has edited volumes on modern European political philosophy, and translated two books by Patrick White into Greek as well as modern Greek poetry into English.

We asked him what his life has been like during the global pandemic.

What have you been reading?

The Classics, only the Classics, especially the writers I missed on the way. Hesiod, Pindar and Callimachus. But also I re-read Aristotle’s major works (the Metaphysics) which people think dry and boring but they are full of irony and humour. I was really excited to detect his sharp with and drift for puns and quips, which are usually lost in translation. Vergil’s Aenead also and Julius Ceasars’ works. I discovered my attraction to the Latin language – skeletal, solid and structured unlike our beloved corpulent and prolix Greek. Plato has been a constant inspiration since I was fourteen and read by accident Socrates’ Apology. Re-reading the Symposium and The Republic made me realise how modern and contemporary he still is: his short dialogue Euthydemus is like a conversation between Jacques Derrida and Ludwig Wittgenstein. Reading it confirmed Whitehead’s dictum that all philosophy is made of footnotes to the great Athenian. Time in isolation seems endless. So, I felt that I had to re-connect with my cultural centres, which are also my existential foundations. I have the impression that after the 50s and the rise of cultural industry nothing of permanent interest has been written. I don’t read books which are best-sellers and promise to educate me – and especially books that received awards and prizes. The Classics only the Classics. But also biographies. I have developed a fascination with Stalin, and the sneaky pernicious ways he used to established the so-called Soviet Mind, which I see coming back today through the media, the polarisation of politics and the lack of real dialogue.

What are you watching?

The enduring films of the past. Especially American film-noirs, Ingmar Bergman, Andrey Tarkovsky, Terrence Malick, Terrence Davis and of course Theo Angelopoulos. But also minor films from the fifties and sixties by obscure and unknown directors from all over the world. I watched the great films of Yussef Chahine again, some great works by Satyajit Ray from India and Japanese films by Ozu, Mizogushi and Kurosawa. Also many Greek films of the sixties which are forgotten, especially some really strange and random works like The Suitcase with the Dead Body from 1963 and Crime in Omonoia Square from 1962. Every day something new is revealed and feel grateful for the people who discover and post them on the net. I definitely don’t watch any contemporary films from Hollywood. Such lack of imagination is really criminal and more infectious than coronavirus.

What music are you listening to?

A wide variety of sounds surrounds my daily silence. With popular music, which is everywhere and you can’t avoid it, I stop with the music of the sixties, especially the American sixties. There was a strange innocence in the sounds of the time. The Greek new wave of the same period still fascinates me together with the best Theodorakis and Hatzidakis music. I love music from Greek films, by Mimis Plessas, Kostas Kapnisis, Christos Mourambas and Eleni Karaindrou. I also love Greek classical music, Nikos Skalkottas in particular, the underrated music of Dimitri Mitropoulos, Manolis Kalomiris’ operas, and Nikolas Mantzaros’ brief symphonies. Skalkottas’ Greek Dances always elevate my mood and Kalomiris’ fourth movement from the Symphony of Leventias makes me feel strong against history. To counterbalance the gravity and the graveness of all these, I challenge myself with the lyrics of Greek rappers, like Tuss and Sin Boy and the tempestuous performances of Eleni Fureira. Who can ever forget her mesmerising performance in 2019 Eurovision?

READ MORE: Reflections on presence: A re-creation in movement

What are you cooking?

I have made a pledge with myself that one day I will cook the perfect Bolognese, with delicious mince sauce and pasta a la dente. And I always fail. I must be missing something. I watch many youtube videos how to make the perfect Bolognese—to no avail. And I will not reveal what happened when I tried to make moussaka. I had to throw the whole tray to the stray dogs around the park who left its untouched. It smelled of something which I never put in the mince. I still wonder what that ingredient might have been. So, here we go, spaghetti Bolognese, one day I will conquer you!

What is keeping you sane at the moment?

I love getting up before sunrise watching the sun coming up over the horizon. I take photographs every morning of the cosmic event I witness daily. Last Monday there was thick fog over Sydney and it was like a prehistoric world, as huge black birds were flying through the dense clouds, up and down crowing and squawking as if from another dimension. And as I was transfixed by the atmosphere, suddenly again, a huge owl sat next to me, hooting and looking with disdain. Sometimes, an aeroplane flies over and I remember with nostalgia my travels. I close my eyes and think of Ios and Folegandros, and the Elysian fields called Elafonisi.

My work now is really uneasy and somehow more tiring than before (and we are getting older, as it happens). Grateful of course to still have a job, mindful of those who have lost theirs. Work looks like being simplified into bare essentials without any sense of tomorrow. Working from home, while being distracted by the daily routine of family and friends, you feel as if there is something missing, as if you are not really working. Teachers need the faces of their students: if you don’t have the validation, or the rejection, of human eyes you feel like an impostor.

What’s something positive you’ve witnessed or experienced since COVID-19 entered our lives?

Finally, we started thinking again about the inner part of our existence which we thought lost under the images of television commercials or the trivialities of politics. I discovered now, (yes now… it is late, I know…) that we do have a psyche and also an unconscious (if these two are identical is another matter). In the silence of the city, things pop up in the clear light of consciousness, things you thought forgotten and thrown into oblivion. Yet unexpectedly, with a suddenness that surprises the mind, an event, a thought, an incident emerges again. As I went into a bakery for bread the other day, Rodrigo’s Concerto de Aranjuez was heard and suddenly I remembered that it was the music for a radio serial in the sixties in Greece called, Laura, a girl different for all others. My grandmother was listening it every morning at 9 and was so impressed by Laura’s ordeals. ‘She was treated worse than a refugee from Asia Minor,’ she used to say. Rodrigo’s guitar transformed the city into a landscape of transparency and surreal beauty. I fell that during this time, we started paying more attention to the insignificant details of our everyday life, which we tend to overlook and bypass. We also revisit our past, our childhood, and the people we lost and forgot. As strange as it may sound, I frequently remember archbishop Stylianos and wonder why we fell out. You always feel mutilated when you lose a friend. And after death comes, you cannot make amends or ask for forgiveness.

What have you learned about yourself during COVID-19?

How much time I have wasted by getting involved with meaningless things. I should have said no to many things and people and be true to what really abides and endures in life, friendship, intimacy and empathy. I spent my youth writing against the poet George Seferis and in my old age I verify many of his insights: As you grow old, the judges that condemn you multiply…says one of his verses. I guess that’s the reason I put on weight and lost confidence in political projects. A sceptic or a cynic? This is the question.

Where’s the first place you’d like to visit in Greece once travel is allowed?

I would like to go to my beloved Piraeus, get into a boat and travel around the Aegean Sea. Just go from one island to another, feel the blue colour again and admire the magic of waves, or smell and taste the wind through the pine trees of the Peloponnese. But more than anything else, I want to go to my mother’s grave who died a year ago and didn’t have the time to have a mnemosyno for her. In the humble village of Krestena, her grave overlooks a deep ravine, full of pine and juniper trees as she lies next to her parents. I had promised her that she won’t be buried in the industrial cemeteries of Athens. And I kept my promise. And this one of the very few things I feel good about myself. During the month of isolation, I see her often in my dreams, and she tells me that she does not like where she is because it is cold and silent and I must go and take her out of there. But I cannot do anything about this. “Our mind is a virgin forest of dead friends,” as Seferis would have said. Poetry, my friends, poetry, that’s what we earn when we confront ourselves in quarantine