Victoria is subjected to a ‘State of Emergency’ and a ‘State of Disaster’ and the powers invoked are lawful. What does that mean? 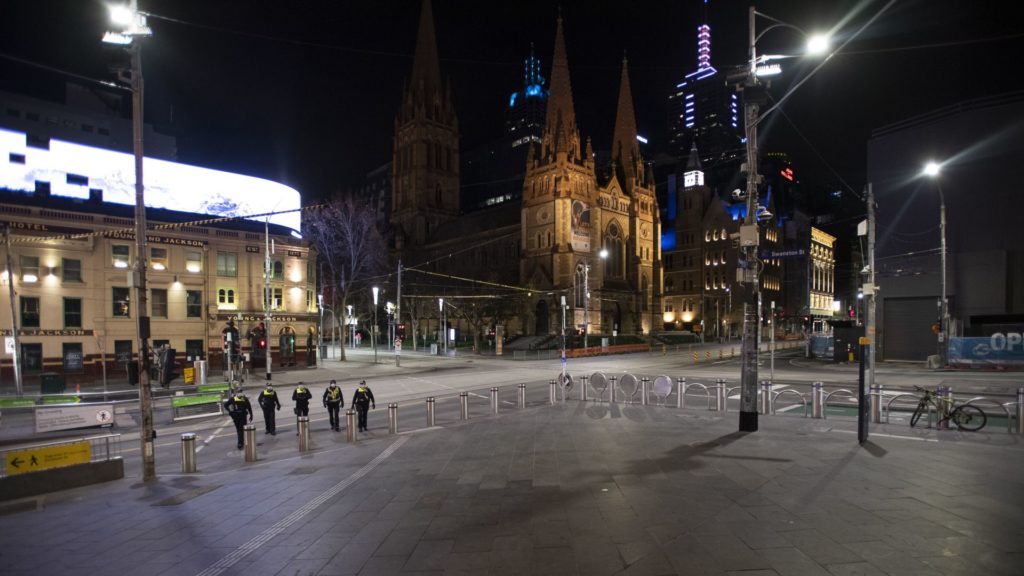 Some Victorians believe that they have the legal right not to comply with the reasonable direction given by authorities in this pandemic environment (’COVID-19’). They refer to themselves as ‘sovereign citizens’. The ideology hatched in the 1970s and grew out of Posse Comitatus, a US anti-government group that contained many followers who were anti-Semitic and believed governments were controlled by Jews.

They were a loose grouping of American litigants, commentators, tax protesters, and financial-scheme promoters. They also fuel anti-government conspiracy and spread this message to a global minority that views COVID-19 as a hoax.

The self-styled sovereign citizens see themselves as answerable only to their particular interpretations of the law and are not subject to any government statutes or declarations. Recently in Australia, the UK and the US, they have violently confronted police. This includes notable resistance to mandatory social distancing and mask-wearing.

“In the last week, we‘ve seen a trend, an emergence if you like, of groups of people … who classify themselves as sovereign citizens, whatever that might mean, people who don’t think the law applies to them.

“We don‘t want to be doing that, but people have to absolutely understand there are consequences for your actions and if you’re not doing the right thing, we will not hesitate to issue infringements, to arrest you, to detain you where it’s appropriate.”

Ms Eve Black has become the face of the sovereign citizen movement in Victoria and arguably in Australia as a whole. She filmed herself refusing to give police her details at a checkpoint and then proceeded to post on social media encouraging others to stand defiant in the name of God and family. For the record, her ‘civil disobedience’, for want of a better phrase, was nonsensical at law and the conduct has encouraged others to do the same.

A declared ‘state of disaster’ is operative in all of Victoria. It took effect from 6 pm, 2 August 2020, and will run for a period of one month. This declaration is different from the existing ‘state of emergency’ and affords the Andrews government a broader arsenal of powers to deal with the COVID-19 threat that is killing many of our elderly together with others.

That is what remains front and centre in my mind, as opposed to the unfounded antics of some young woman who craves ‘celebrity’.

What is a ‘state of emergency’?

Victoria has been in a declared ‘state of emergency’ from 16 March 2020. A government declaration that was made pursuant to the Public Health and Wellbeing Act 2008, on the basis that there is a serious risk to public health.

On Sunday 20 June 2020, Victoria’s health minister, Ms Jenny Mikakos MP, announced the state had recorded 19 new cases of the virus, including 10 cases believed to be a result of community transmission. It brought the total number of active COVID-19 cases at that time to 121, the highest recorded in that period. On 19 July 2020, Ms Mikakos MP extended the state of emergency until 16 August 2020. It is likely that there will be further extensions.

The Act (law) enables the use of wide-ranging powers to be exercised by the Chief Health Officer Professor Brett Sutton, a person with extensive experience and clinical expertise in public health and communicable disease. Professor Sutton is not unlike Greece’s Sydney-born Health Ministry spokesperson and infectious diseases expert, Professor Sotiris Tsiodras.

These powers include the ability to quarantine, prohibit large gatherings, and impose restrictions pertaining to the movement of people. The law also enables authorities to make decrees and give direction that is considered to be reasonably necessary in the circumstance to protect public health.

What is a ‘state of disaster’?

A ‘state of disaster’ declaration goes further and deals with matters that go beyond public health issues. Historically, the provision has dealt with events such as natural disasters, explosions, terrorism or sieges. It ought to be understood that the provision can also be used to combat against ‘a plague or an epidemic’. It was invoked in Victoria in January 2020 during the bushfires. The declaration then took effect in specific areas only.
However, on this occasion, the state of disaster operates across the entire state of Victoria, and as mentioned for the maximum period of a month. A supplementary declaration may be made to extend the state of disaster.
The Emergency Management Act 1986 enables the premier of Victoria to make such a declaration that extends the operation of the state of disaster. If the premier, in consultation with the Chief Health Officer and others, is satisfied that the emergency continues and “constitutes a significant and widespread danger to life or property in Victoria”, he will extend.

READ MORE: Looking at what led to the Victoria’s ‘state of disaster’

What powers does a ‘state of disaster’ invoke?

Simply, the declaration gives the police minister the authority to direct and coordinate the work of all government agencies in response to the disaster. One example is the minister may divert government resources in response to the pandemic i.e., away from schools, Universities public works, and so on.
The minister has the power to direct police to take a particular cause in this Covid-19 environment. This power is what has invoked the recent controversies witnessed by social media performances. Opponents say it is unlawful for one minister’s direction to prevail over any other laws or person’s right in the state of Victoria. Specifically, police cannot compel a person to give their particulars unless there is a cause or reasonable suspicion that they may have engaged in an activity that is illegal or may be able to provide information in connection to an activity that is been investigated. Police normally do not have the legal standing or power to restrain, stop, or question a person if there is no cause to do so. Loosely, this ‘civil right’ is fundamental to our legal system and what is often referred to as the exercise of executive powers. Currently, a person’s right to not be questioned or delayed has been suspended. A person must provide their details at a checkpoint or when questioned by police notwithstanding there is no cause. If you don’t you run the risk of being arrested, prosecuted, and fined.

Why was it deemed necessary to declare a ‘state of disaster’?

The royal commission into the 2009 Victorian bushfires found that it was a significant failing on the part of the Government of the day not to declare a state of disaster. Amongst other findings, the Commissioner resolved that a declaration at that time ‘would provide symbolic recognition of the gravity of a situation’ which may have sharpened the focus of emergency services. The Commission when on to say that such a declaration may have put political leadership firmly in charge of the emergency, reassuring the public and demonstrating high-level government attention.

Presently, emergency services are clearly focused and there is high-level government attention in respect of the COVID-19 pandemic. The declaration of a state of disaster appears to be effective in reinforcing to the public the necessity of complying with government instructions. The symbolism alone is persuasive and in response, the greater majority of Victorians are complying with the aim to eradicate this threat.

Section 198 of the Public Health and Wellbeing Act provides that a declaration of a state of emergency does not lessen or limit any provisions in relation to the declaration of an emergency under any other Act.
The powers bestowed on a Government Minister, the Chief Health Officer, and others with respect to both declarations – a state of emergency and a state of disaster are intended to operate in tandem and cooperatively. It reduces to government marshalling its firepower to defeat the pandemic in a co-ordinated manner in response to the emergency.

This article follows and concurs with the learned opinion of Dr Anne Twomey, Professor of Constitutional Law, the University of Sydney, published in THE CONVERSATION on 2 August 2020

Reference: Extension of Declaration of State of Emergency