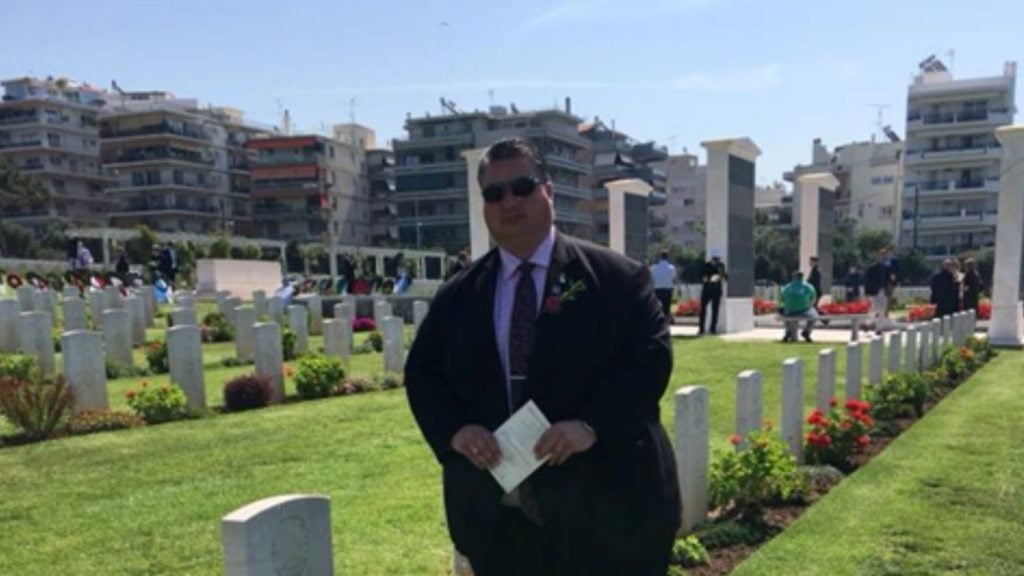 Last week saw the commemoration of the end of the Second World War. Last week was also the occasion for Lee Tarlamis MP to speak in the Victorian Parliament to mark the recent passing of Anzac veteran Norm Maddock who served in the Greek campaign of 1941.

Mr Tarlamis OAM is the Upper House Member for the South Eastern Metropolitan Region and is also President of the Lemnos Gallipoli Commemorative Committee. He had known Mr Maddock for many years, including joining him in commemorations on Crete. Below is Mr Tarlamis’ statement to Parliament:

It is with great sadness that I rise to commemorate the passing of Anzac veteran Norman ‘Norm’ William Maddock on 19 June. As a young 18-year-old Norm enlisted in June 1940 at Caulfield, joining the 2nd Australian Imperial Force’s 2/7th Battalion. His service would see him take part in some of the most famous victories of Australian arms—at Bardia and Tobruk. Norm and the 2/7th would go on to serve in the defence of Greece in April 1941.

This ill-fated campaign would see Norm take part in a series of engagements against the German invaders as the Allies fought a rear-guard action across the Greek mainland actions. Successfully evacuated from the port of Kalamata, Norm would take part in the Battle of Crete, fighting at Georgioupolis, Chania and the Battle of 42nd Street.

I had the privilege of knowing Norm personally for many years and it was an honour to accompany him to Crete for the 70th anniversary of the Battle of Crete and Greece commemorations in 2011. It was during these commemorations that Norm recounted to me his experience during those dark days of war.

After the Battle of Crete Norm was able to escape, along with a group of other Allied soldiers, surviving a harrowing nine-day journey across the Mediterranean on a barge, eventually reaching the safety of Allied lines in Libya in June 1941.

A brave man indeed. It was also my honour to have taken part in the annual Battle of Crete commemorations held here in Melbourne, where Norm was always a guest of honour. It was on these occasions that Norm would never fail to express his admiration for the Cretan people he had fought with and who had assisted in his escape from captivity.

For Norm, as for so many veterans of this campaign, the Cretan people were the real heroes, risking their lives to help the Allies. This praise was warmly reciprocated by the people of Crete and Greece, as well as by the Australian Cretan and wider Greek community. For his service he was honoured by the prefect of Rethymnon and the district governor in 2010, the governor of Crete in 2011 and by the head of the Hellenic defence forces in 2016 and was made an honorary member of Melbourne’s Battle of Crete & Greece Commemorative Council.

Norm joined his father in the tramways and would be a leading figure in the Victorian tramway’s union from 1947 to 1986 and made a crucial contribution to the Malvern tramways union. For his efforts Norm was awarded the Order of Australia in 2007. And as a staunch lifelong unionist, Norm was also a lifelong member and activist in the Australian Labor Party.

Norm was someone who took a challenge and didn’t look back, whether in civilian life or in the dark days of war. He cared about his community and the future. That’s why he was proud to have stood up against fascism and to have helped his fellow workers. Along with all his comrades who served in the Greek campaign, Norm will be forever remembered. I am sure that all here would join me in extending the Parliament’s condolences to Norm’s family.