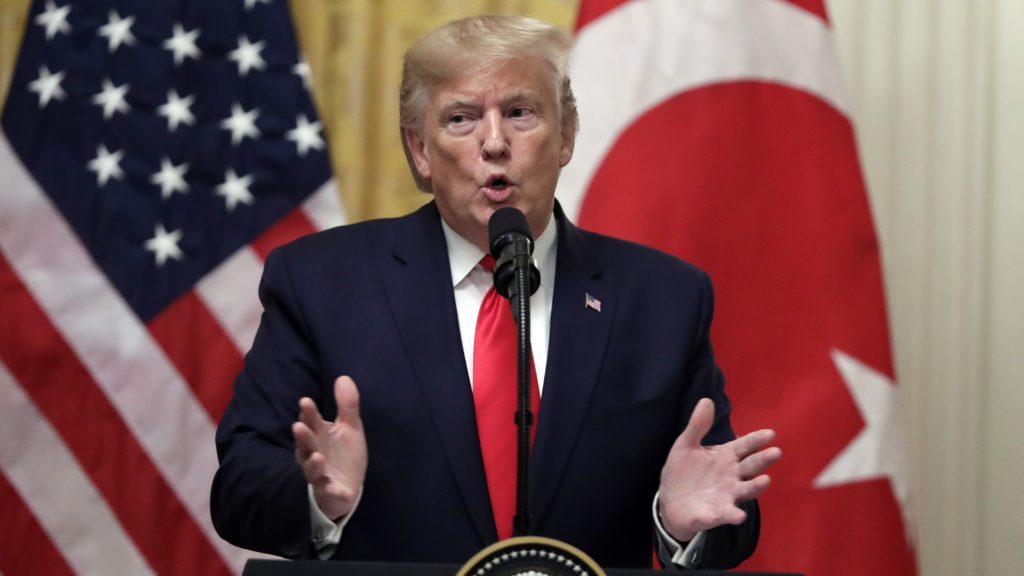 US President Donald Trump at a press conference with Turkish President Recep Tayyip Erdogan in Washington in November. Photo: AAP

Turkey has a large population and a large economy. Recep Tayyip Erdogan is planning the future very carefully, boosting the defence industry, and preparing to celebrate the 100th anniversary of the founding of the Turkish Republic in 2023 (perhaps, stealing a little glory from Mustafa Kemal Ataturk). In his speeches, Mr Erdogan blames the Greeks for all the misfortunes of Turkey. The Greeks are the paradoxical thorn in the Turkish psyche after decades of propaganda.

Modern Turkey is exercising a very old foreign policy, as if it has been in vertigo. It is behaving in various neighboring countries, as if they were still provinces of the Ottoman Empire.

Turkey is also known for its confrontations with Israel, which it often accuses for terrorism against the Palestinians. It treats the eastern Mediterranean Sea as one private lake inside a zoo. It is attacking Syria and this is a harbinger of other attacks. It converts the Hagia Sophia from a museum to a mosque (24 July, 2020).

But what does modern-day Turkey really pursue? Dear Americans, asking rhetorically: Isn’t it a large enough country – occupying 783,000 square kilometres of the world?

Turkey, is exercising psychological violence, in two of its neighbouring countries. One country is Greece, the other country is Cyprus (only occupying the southern part of the island after the Turkish invasion of the northern part in 1974). Turkey, however, is constantly in breach of their rights at sea and in the air.

READ MORE: Turkey extends an olive branch to Greece in the Eastern Mediterranean as long as there are no “preconditions”

The Turks, too, underestimate the recent statements by US Ambassador to Athens Geoffrey Pyatt, which are clear regarding the inhabited islands: “They have equal rights with the mainland,” always based on international law and practice. And maybe, let’s just say, it’s not only psychological violence and constant bullying, but the Greeks are directly threatened on a daily basis by Turkey, a NATO member and ally.

Dear Americans, asking rhetorically again: Is that right for an ally to behave like this?

Turkish diplomacy and behavior in recent decades has repeatedly shown that it does not respect Greece’s rights.

Turkey does not even want to hear about the maritime zones of Greece, which is the de facto exercise of its sovereign rights. Turkey entered an agreement with the Libyan government on maritime borders, without taking into account the islands of Crete, Karpathos, Rhodes, as well as the small Greek islands of Ro, Kastellorizo, and Strongyli. In an incredible sense, as if we were saying, we exclude maritime zones from Hawaii, as an example. In essence, Turkey signed (November 28, 2019) an agreement on “imaginary maritime boundary” with Libya, because if one reads the map carefully, he will see this absurdity immediately.

And in the air, things are not better; Turkey’s warplanes violate Greek airspace. The Hellenic Air Force is hitting the air daily, but Turkey again, cunningly with the dogfights, manages to pass on an innocent cat and mouse game. With so many violations, the Turks are seeking to create a grey zone regime, with sovereignty being disagreeable between the two countries, something they have been able to do since the 1996 Imia crisis.

The US, the UN, the EU and the international community must in turn find ways to intervene before it is too late for peace in the Balkans. The countries therefore have the Armed Forces, although the scenario of the war was unlikely in the past, it is now closer and like a ghost is hovering over the Aegean Sea.

Dear Americans, as the Greek Foreign Minister Nikos Dendias said in an interview: “Revisionism and grey zones could become a boomerang for Turkey.” Calming tensions, is only a short-term solution; as soon as today, Turkey rejects the post-Lausanne order. The Treaty of Lausanne was signed on July 24, 1923 (and enabled decades of stability). By the way, the exact day of this anniversary, a few weeks ago, Aghia Sophia became a mosque. The symbolism speaks for itself, and so far, it is obvious that Turkey has done wonders to bring against her the French, the Israelis, the Arabs, and above all, the Greeks.

Dimitris Eleas was born in Athens, Greece in 1973. He moved to London, England in 1995 to study Political Science. He is a writer, independent researcher, and political activist, currently based in Brooklyn, New York City.