Aegean on the edge: Greek and Turkish military strength compared in infographic

A handout photo made available by the Greek National Defense Ministry shows part of a joint Greek-US aeronautical exercise that was held in the sea area south of Crete Island, Greece (issued 25 August 2020). According to a Hellenic National Defence General Staff's announcement, the exercise, which is part of the ongoing military cooperation between Greece and the United States, included among others cooperation in the areas of joint operational planning, air defense, anti-submarine warfare, communication, information exchange as well as planes and helicopters cooperation. The frigate AEGEAN, a submarine Type 214 and six F-16 aircraft participated in the exercise, while from the US side the destroyer USS WINSTON S. CHURCHILL, as well as navy helicopters of both countries. Photo: AAP via EPA/Greek National Defense Ministrry

The Hellenic Air Force is about to be beefed up with Rafale squadron jets added to its existing fleet of Lockheed F-16 Fighting Falcons, Dassault Mirage 2000s and McDonnell-Douglas F-4 Phantoms.

Greek Prime Minister Kyriakos Mitostakis’ announcement that Athens would buy 18 French Rafale combat aircraft on Sunday was confirmed by the French defence ministry. Negotiations would continue over the next months, leading to a contract signature for the jets before the end of 2020. Greece is the first European client for the aircraft which are also used by Egypt, Qatar and India.

The cost of the weapons deal has yet to be released, but the press is aware that the Rafales will replace Greek Mirage 2000s of the 332 Squadron Gerakia.

Greece is also purchasing four frigates from France, a negotiation which has been ongoing for several years. Four MEKO frigates will also be refurbished.

The defence procurement comes at a time when tensions are growing with Turkey following Ankara’s violation of Greece’s sea territory on 10 August by the survey vessel Oruc Reis. The withdrawal of the vessel was welcomed however there is still a great deal of tension. Statista created an infographic comparing the two NATO neighbours’ defence systems. 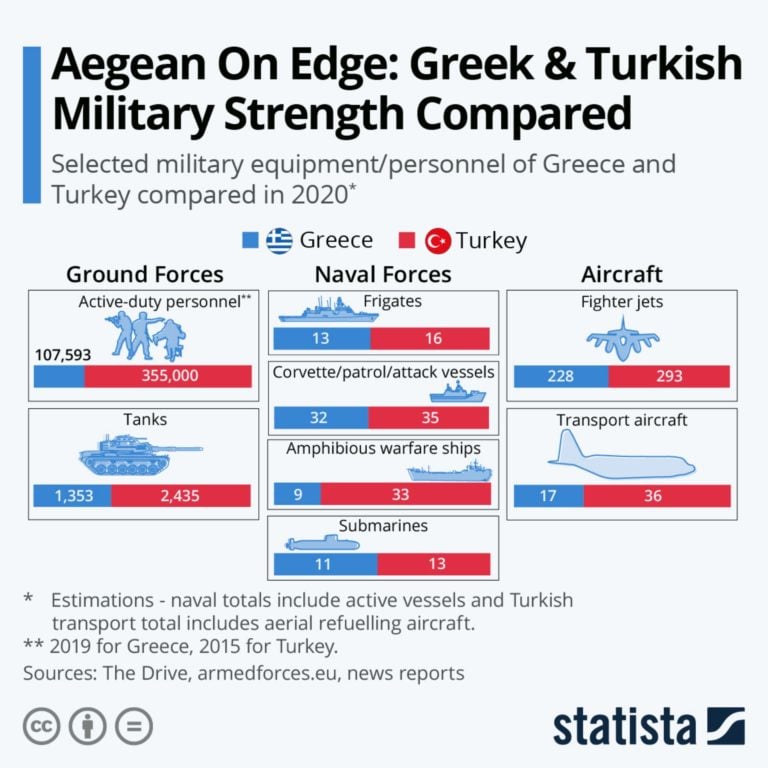