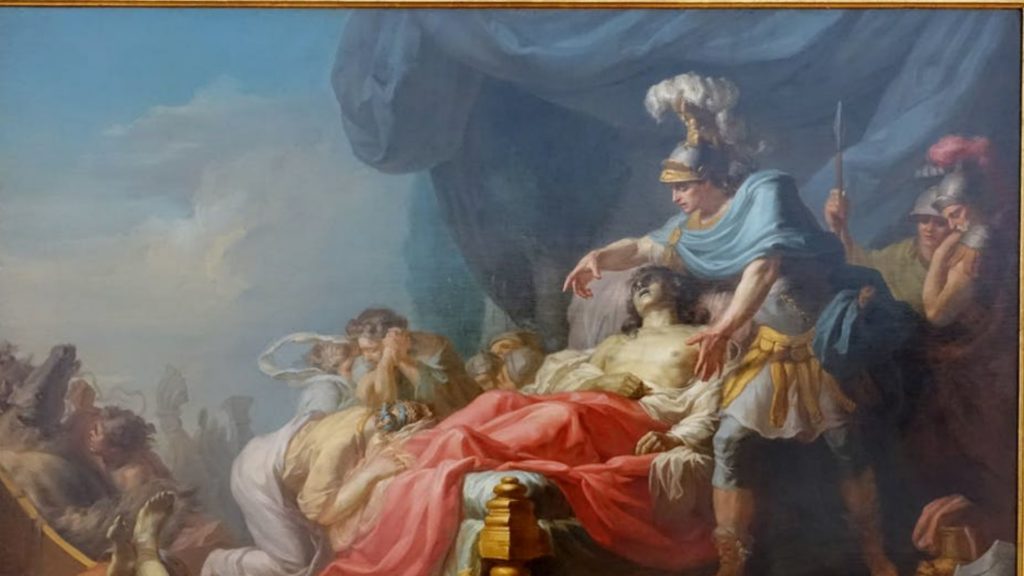 Greek hero Achilles with the body of Hector, his main opponent in the Trojan War. Photo: Jean-Joseph Taillasson/Krannert Art Museum

As a scholar of classical studies, I tend to look to the past to help understand the present. Ancient literature, especially ancient Greek epics, explore what it means to be human and part of a community.

In the Greek classic “The Iliad,” Homer specifies few universal rights, but one that emerges clearly is the expectation of proper lamentation, burial and memorial.

Homer’s “Iliad” explores the themes of 10 years of war – the Trojan War – over a narrative that lasts around 50 days. It shows the internal strife and the struggles of the Greeks as they try to defend themselves against the Trojans.

It humanizes the city of Troy by emphasizing the scale of loss and suffering and not just the boastful nature of its kings and warlords.

The epic begins with the recognition that the rage of its main character, Achilles, on account of a slight to his honor, “created myriad griefs” for the Greeks and “sent many strong heroes to the underworld.”

The epic’s conflict starts when king Agamemnon, leader of the Greek army, deprives the semi-divine hero Achilles of Briseis, an enslaved woman he was awarded as a prize earlier in the war.

Briseis is said to be Achilles’ “geras,” a physical token indicating the esteem his fellow Greeks have for him. The meaning of the word “geras” develops as the poem progresses. But as readers learn alongside Achilles, physical objects are essentially meaningless when one is going to die anyway.

The epic ends with a justification for the burial of Achilles’ opponent, Hector, the greatest of the Trojan warriors and another victim of Achilles’ rage.

For Hector’s funerary rites, the Greeks and the Trojans agree to an armistice. The Trojans gather and clean Hector’s body, cremate him, and bury his remains below a monumental tomb. The women of the city tell the story of the brave hero in their laments.

This is its foundational narrative – that burial rites are essential to the collective work of communities. Failure to observe burial provokes crisis. In the Iliad, the gods meet to resolve the problem of Hector’s unburied body: Achilles must quit his rage and give Hector’s body back to his family.

This narrative is repeated in other ancient Greek myths. Best known, perhaps, is Sophocles’ “Antigone,” a Greek tragedy dating from the 440s BC In this play, two brothers, Eteocles and Polynices, are killed in their fight for control of the city.

Creon, their uncle, who takes over the city, forbids burial of one. The play’s conflict centers around their sister Antigone, who buries her brother against the new king’s wishes, consigning herself to death.

In opposing this basic right, Creon is shown to suffer in turn, losing his wife and son to suicide in the process. In response to the capital punishment of Antigone for performing the rites due to her brother, his son Haemon takes his life and his mother Eurydice follows him.

Properly honoring the dead – especially those who have died serving their people – is from this perspective a divinely sanctioned right. Furthermore, mistreatment of the dead brings infamy on the city and pollution. Plague often curses cities and peoples who fail to honor their fallen.

This is central to the plot of “The Suppliants,” another Greek play telling us the story of the conflict between the sons of Oedipus, king of the Greek city of Thebes. In this play by Euripides, the Thebans refuse to bury any of the warriors who fought against their city. The crisis is resolved only when the Athenian hero Theseus leads an army to force them to honor the dead.

One of the most famous examples of classical rhetoric shares in the tradition of honoring the dead as a public duty. Greek historian Thucydides writes about the funeral oration of Pericles, who was a popular leader in Athens during the 430s B.C.

On the occasion of offering the “epitaphios,” a speech over the fallen war dead, Pericles articulates his vision of the Athenians as standing against foreign threats in the past.

Memories of the past were an important guide to the future. This is in part why the funeral oration became so important in Athenian life: It provided an opportunity to explain why those lives were sacrificed in service of a shared civic mission and identity.

Even today, memories are shaped by stories. From local communities to nations, the stories we tell will shape what we will remember about the past.

Many people who see loved ones die will deal with unresolved loss, or “complicated grief” – grief that results from not knowing what happened to one’s loved ones or without having the social structures to process their loss. That grief has been compounded by the current isolation. It has prevented many from carrying out those very rites that help us learn to live with our grief.

READ MORE: The Plague of Athens as told by Thucydides: a timeless analysis of an epidemic

Just recently, I lost my 91-year-old grandmother, Beverly Mjolsness, to a non-coronavirus death. My family made the hard decision not to travel across the country to bury her. Instead, we gathered for a video memorial of a celebration of a life well-lived. As we did so, I could see my family struggling to know how to proceed without the rituals and the comfort of being together.

Joel Christensen is the Associate Professor of Classical Studies, Brandeis University. This article appeared in The Conversation.