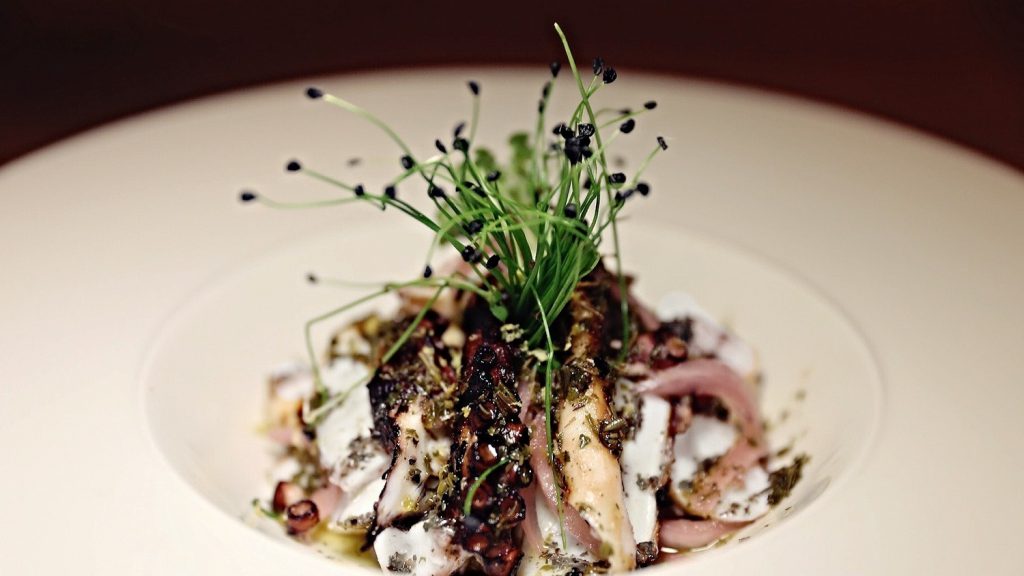 Executive chef Arthur Robert Saks III, a young American who fell in love with Greek food early on, is behind the restaurant’s five-star menu.
When asked about Kavala’s success, he says “I’m nothing without my team; we are each other’s inspiration.”

“It has taken me years to build the relationships with these people; the people that make Kavala what it is. And without my boss and owner Jo Licoulis I wouldn’t have had the chance to create this restaurant and provide the NY scene with what I consider to be some of the best Greek food.”

Apart from traditional and staple Greek items, Arthur has included several gourmet options of his own interpretation, while staying true to the Hellenic mentality.

The awarded chef realised his love for food at the age of 10 and began working at a restaurant in South Carolina, where he stayed until he turned 12. “When I was 15, I moved to the Caribbean. I got my start as a cook in St Thomas, in the US Virgin Islands,” he tells Neos Kosmos. “From there I continued to Atlanta and then to Georgia, where I started working as a chef for a Greek seafood restaurant, Kyma.” At the time, Kyma was in the top five Greek restaurants in the country and it is where young Arthur gained valuable knowledge of Greek food. “The menu was phenomenal,” he emphasises. “Modern authentic Greek cuisine – mainly seafood – with a subtle touch of French and American influences. “Everything was done with such love and executed by professional, well-trained chefs. Since working there, my entire career as a chef for the next eight to 10 years revolved around Greek cuisine from California to Alaska and back to New York.”

Arthur describes all of his experiences with Greek food in the US besides Kyma as “rather dull”. There either seemed to be something missing from the dishes, or the items on the menu would clash.

“While some options were good, as a whole, the meal would be lacking; flavours, textures … it just wasn’t complete,” he says.
“When I got the opportunity to create a Greek restaurant of my own, I took into account what I loved so much about Kyma and what really made me fall in love with Greek food.” Arthur, who delved into the Hellenic food philosophy, was determined to convey the highest level of service and quality of food without the negatives.
“We have created a full meal experience with appetisers, entrées and desserts that complement one another,” he explains.

“The restaurant offers traditional Greek food, with several items that have a modern twist, my own ideas based on Hellenic spices and flavours that Greece is so famous for, the right combination can upgrade a recipe.”

Among the top-selling traditional dishes is the grilled octopus, braised in a blend of red wine vinegar and the juice of the Kalamata olive at a low heat. Then it is grilled over a wood flame and served with pickled red onions, finished with a touch of red wine vinaigrette and imported oregano. “At the same time if you are going to go modernised, I suggest the lamb neck ravioli,” Arthur says. “You’d never think that a Greek dish with an Italian-influenced ingredient would be such a hit. We won an award with this dish at the New York pasta bowl. I put it on the menu and it sells. Miserably.” The menu also features classics like souvlaki, ouzo and lemon saganaki, spanakopita, crispy zucchini, eggplant chips, fava (chickpeas), eggplant entrées, lamb selections, a different take on Greek salad, and lemon potatoes. All the spreads – tzatziki, tarama, tyrokafteri and hummus – are made in-house from scratch. They also do seafood and are famous for the grilled and crispy calamari, as well as fried and whole fish dishes like the branzino, porgy and sea-bass delivered daily from the Mediterranean.

Kavala, which seats about 50 people but also has a 85 square-metre patio area, holds a full liquor licence and also features a bar and an extensive wine list.

“Hellenic cuisine offers a plethora of mouth-watering recipes which can be complemented immensely with the right glass of wine,” Arthur adds, emphasising the wonderful variety of wines originating from Greece.
“Greek wines are the best match for Greek food. It makes sense when the spices and ingredients explode in your mouth. If you do Greek food, you need to have Greek wines on the menu.”

Meanwhile, Kavala Estiatorio’s wine list features a large selection of Greek wines from the wider Macedonia region and especially Kavala, for which it has received rave reviews.

“I went to Kavala and this whole idea resonated with me,” Arthur says.”The name seemed like the right choice.”
“Keeping it authentic, with a provincial touch. Our menu is influenced from the food history of the area and the flavours of the wine in the region.”

Part of this success is owed to the restaurant’s Greek manager, who is also the sommelier and helped Arthur find the right mix to cater for all different tastes and budgets.

“We hero the food but we strive to make the most of food pairing. An all-rounded and considered wine menu takes the dining experience to a whole new level.”

For more information head to www.kavalanyc.com