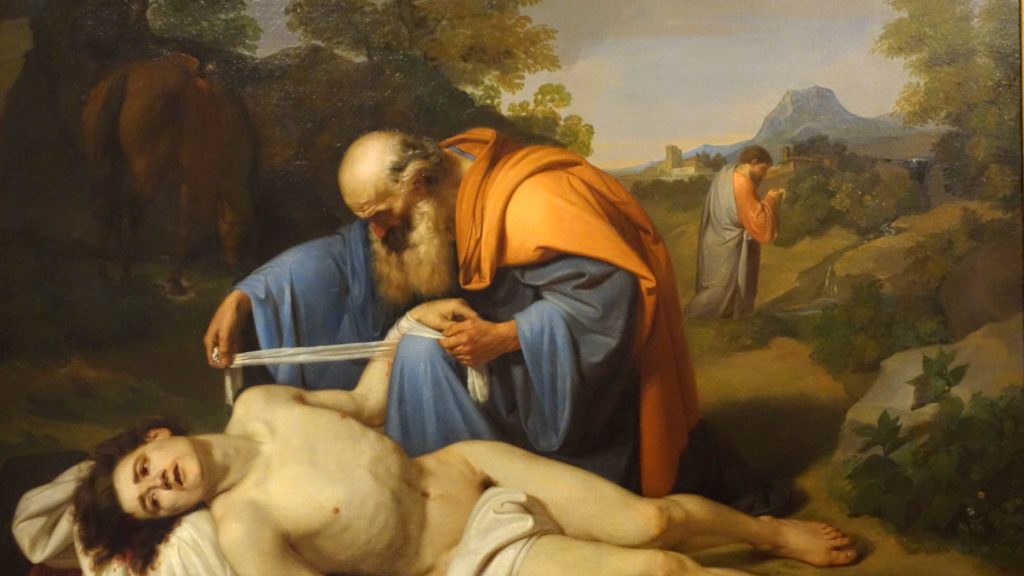 Things were clearer in Jesus’ time.

According to the bible, a follower asked Jesus to explain: “Who is my neighbour?”

Jesus gave the example of the man going from Jerusalem to Jericho who was stripped and pummelled by robbers and left for half dead.

A “certain priest” who was coming down the road saw the injured man, but passed by on the other side of the road. A Levite arriving at the same spot, also saw the battered man and did the same.

Then a “certain Samaritan” came along , saw him and took pity on him. “He bandaged his wounds, poured oil and wine into them, set him on his own donkey, took him to an inn and looked after him.” He then gave the innkeeper money to take care of him further. If that money were not enough, the Samaritan said, he would give the innkeeper more when he returned.

When Jesus then asked the follower which of the three passers-by was the injured man’s neighbour, he replied the “merciful” one.

I tried last Saturday 10 October, at about 5pm, to do the same. I was walking en route to Woolworths to buy toilet paper.

As I walked up to the park, near the corner of Victoria and Lennox streets, North Richmond, a First Nation’s man was unconscious on the footpath, his pelvis twisted. He looked like death: a motionless black man, with black long hair covering his face, wearing all black clothes, collapsed on a grimy, black footpath.

This area of Melbourne is well acquainted with dying.

The area where the man lay is in what locals refer to as the “Golden Triangle”: an inner-city area bound by Victoria, Lennox and Elizabeth streets notorious for its large amount of high quality, illicit drugs. The area’s status was sealed two years ago when the State Government set up Australia’s second Medically Supervised Injecting Room (MSIR) within its boundaries, at the North Richmond Community Health Centre, in Lennox St, metres from where the man now lay. The MSIR was in response to more than 30 deaths in a 12-month period in and around Victoria St from drug overdoses, in 2016.

A 20-year resident of the area, I know not to touch unconscious people laying in these North Richmond streets. So, from a metre away, I yelled at the unconscious man to wake-up.

He did not respond. I screamed louder and louder still. He opened his eyes for a moment and then closed them. I shouted again and asked if he was “okay”.

Then I decided I wasn’t going to shout anymore. I called an ambulance. A young couple walking past on their way to the supermarket stopped. I told them I was calling triple 000. They waited with me. I got through.

The unconscious man opened his eyes. He said he had hurt his hip and closed his eyes again.

As I was giving the man’s details to the triple 000 operator, another man came up behind me, told me to hung up the phone, the man was fine and he was just drunk.

I asked how he knew that. He said he didn’t and just kept walking.

I began answering more of the triple 000 operator’s questions.

READ MORE: ‘My life in Richmond’, living near an injecting room

“Was he bleeding?” he asked

“Does he have a weapon?”

At the corner of my eye I could see the unconscious man’s “friends” starting to appear. A couple came out of nowhere.

When I ignored them and continued relaying the details to the triple 000 operator, the couple started getting closer.

“What do you think is wrong with him?” the operator asked.

“One man that walked past told me he was drunk. He looks like a drug addict,” I said.

The man that formed part of the couple and wearing in a blue mask, now started racing up to me, waving his hands. He insisted I cancel the triple 000 call. His female companion sat by the injured man trying to wake him. She was also screaming at me to terminate the call.

Then the injured man on the footpath came to and started swearing at me.

The operator could hear the injured man’s swearing and the commotion and his questions changed.

“Make yourself safe,” the operator instructed.

“Yes, I’m moving even further away.”

“You need to leave the area and make yourself safe”, the operator said. “I will hang up and another triple 000 operator will call you immediately,”

I stood at the corner of the street and waited for the other emergency service call. People kept walking past the unconscious man.
Many had recyclable shopping bags under their arm. Some walked around the man. Most, like in Jesus’ story, saw the injured man and crossed the road. One shopper stepped over the injured man and then kept walking. No passers-by spoke to me or the couple who stayed with me.

A new emergency services operator called me back immediately.

“Yes, I am. I am on the street corner. A young couple are with me.”

“Okay, what is the man doing now?” she asked.

“He is still on the footpath unconscious. There are now three people around him.

“Now there are five.”

She asked for the street name and I gave her the park as a landmark, too. She located the area within seconds. She told me the nearest police and paramedics were on their way.

She told me she had all the information she needed and I was “free to go about your day”. I told her I would wait on the corner until emergency services came in case they needed me. She said it was up to me, but I was free to go.

I exchanged names and numbers with the young couple, Jackson and Sherry, who stayed with me.

They abandoned their trip to the supermarket and went home.

I waited on the corner for five minutes and then decided to leave. I didn’t want to walk pass the man who was still lying on the footpath unconscious, so I took the long way to the supermarket.

I bought my toilet paper and started walking back home. But, I couldn’t resist. I had to see what happened to the unconscious man, on the footpath near a park, with the twisted torso.

It was now 6pm and a group had formed in the park. They were sitting at the tables. They were laughing. They all seemed comfortable in each others company. And there, standing on the footpath was the unconscious man. He was on his feet. His arms were stretched out and he was trying to dance. He was singing. He was happy.

I was confused. Had I misunderstood the situation? Were my attempts to help the unconscious man just meddling into his life?

At 7.43pm the young couple who stayed with me SMSed me and said they were happy to stop and render me support.

“Not a problem. You did the right thing today,” Jackson wrote.

I suddenly felt less like a drama queen. Maybe I was that good Samaritan today, after all.