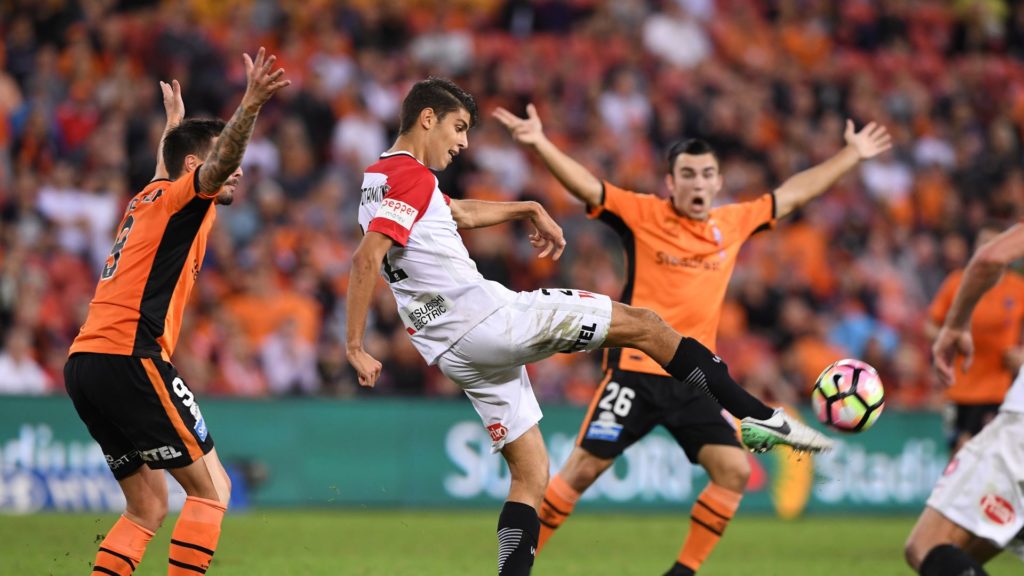 The A-League pre season is underway, as clubs across the nation gear up to make up for lost time.

Last week Perth Glory made their way over to Qatar to play in the Asian Football Confederation Champions League.

Neos Kosmos had a chat with one of Glory’s newest recruits, defender Jonathan Aspropotamitis.

The 24-year-old’s career has already been quite colourful since making his professional debut in 2015 with the Western Sydney Wanderers. Since then he has also played for the Central Coast Mariners and Western United.

He has already made Perth Glory history, scoring the team’s first ever goal in AFC Champions League on 18 November.

I started when I was really little and I guess at that age you kind of don’t know why you play, you just want to be outdoors, run around with your friends and kick a ball around. Like all players, I was a very outdoorsy kid and we just wanted to be outside all the time.

The way my parents explained it to me was that I just wanted to be outside 24/7 kicking a ball or playing rugby league, or soccer or playing basketball. It was just the lure of any sport really, but as I got older football was really attractive to me because my friends all played and it was just so exciting to play.

Every single player is so different and unique in how they prepare. I’m more relaxed, focused on what I need to do. The most important thing for me is just to have a smile on my face and make sure I’m enjoying it, but at the same time really focused on what I need to do. You can never guarantee that you’ll win a game but at least you know you’ll enjoy it and you’ll work really hard and have a positive attitude. So I’m more on a calmer, relaxed side.

If it’s a night game I get up, have a bit of breakfast and go for a walk. Then slowly make my way to the stadium and once I’m there it’s all about being fully focused on what I need to do.

I would have to say Greaze Mode by Skepta, Cataracts by Freddie Gibbs and then I would have to say, Own It by Stormzy. When I was in Melbourne last year I found there was a huge music culture and a lot of people I met were into the sort of music I was into.

Every single game has its different challenges. As a defender, there are attackers that are more difficult to come up against than others. One of the biggest challenges for me is that sometimes when I know I’m coming up against a really good player, is to have that confidence in myself to know that I can get one over him. Sometimes it’s more from that standpoint where it can be a confidence thing.

If you’re playing against a player who has a really good reputation or has had a really good career, knowing that I’m on the same field as him, we’re on the stage together and we’re all as good as each other here. Once I see past that challenge I get to enjoy it and if I’m happy and enjoying my football everything just flows off from that. If there are challenges it’s probably when I’m not enjoying football.

My first few years at Western Sydney I was very fortunate to play a lot of games and play under Tony Popovic. For me that was one of my biggest highlights, because I got to play under a coach that was very well respect and one of the best in Australia. I had a really good experience under him.

I had a set back when I ruptured my ACL so that kept me out for nine months, since then I’ve moved a couple of times to find some regular football again and try and find that enjoyment of playing again. But the highlight I won’t forget was playing my first game alongside being captain of the Under 23’s Australian side. That was a huge honour for me and my family.

Now it’s my job so it becomes everything. My family loves sport. We grew up watching sport together, so football has brought us even closer together. My parents would watch me and my brother play, going to either ends of New South Wales and driving around on Saturdays and getting us to different grounds really brought us close together.

The capacity for your mental strength. Football throws out so many challenges, whether it be injury or non selection or a coach not liking you. a lot of people see the glitz and the glamour of football but like anything in life, there are a lot of downsides that people don’t see on your way to being successful. Knowing that there’s going to be setbacks, but it’s about how you react to those moments which is most important and how you mind with get over them and move on.

That’s what I’ve learnt, especially during my junior years not being selected for a team or a state team or a national team, it’s just being able to move forward. You cannot let an opinion shape who you are as a person because there are so many other people that appreciate the way you are.

Whether I’m with Perth Glory after the Asian Champions League or at Western United I just want to try and get as many games under my belt. From an outside perspective I’ve almost finished my business management degree at UTS, so I’m looking forward to 2022 when I finish that.

I go through phases of reading books. In the last three to four months I’ve read about four books, in the months before that I wasn’t reading as much. I’m trying to get into a cycle of reading again. I’m really interested in reading books on people’s life experience and personal development.

I’m in the process of reading The Power of Now by Eckhart Tolle, which is all about being present in the moment and mindfulness.

I love when my family get to come watch a game and being able to go out for dinner with them. When we get back home I like catching up with them because I don’t get to see them very often.

Sport in general can be very mentally draining. When we train and when we play, we have to be so focused and after the game it’s just as important as before it, to relax and try to take your mind off it because you’ve put your mind and body through two to three hours of strenuous exercise.

It was quite difficult because at Western United last year we were really good in terms of our form and the way we were going in March. We were really heading on an upward trajectory and we got halted by COVID. We were away for 12 weeks before we could start training again because of all the restrictions. So it held up a lot of teams, processes and people’s progress.

We came back and continued on in the same way and you have to deal with the challenges that weren’t just quarantine. Playing with no crowd was a big one. But back at Western United we really came together as a group, dealt with it well by being as one. In a weird way COVID made our squad last year come closer both on and off the field.

Macarthur joining the league is exciting. I know I’m a player but I’m a fan as well so looking from a fan’s perspective there are a lot of young players who get an opportunity this season. With the salary going down and squad sizes reducing, there’s going to be a lot of young players getting their opportunity, so an extra team opens up a few more spots. Fingers crossed for those boys, because we need to see more younger players in the A-League because that will also help us with the national team.