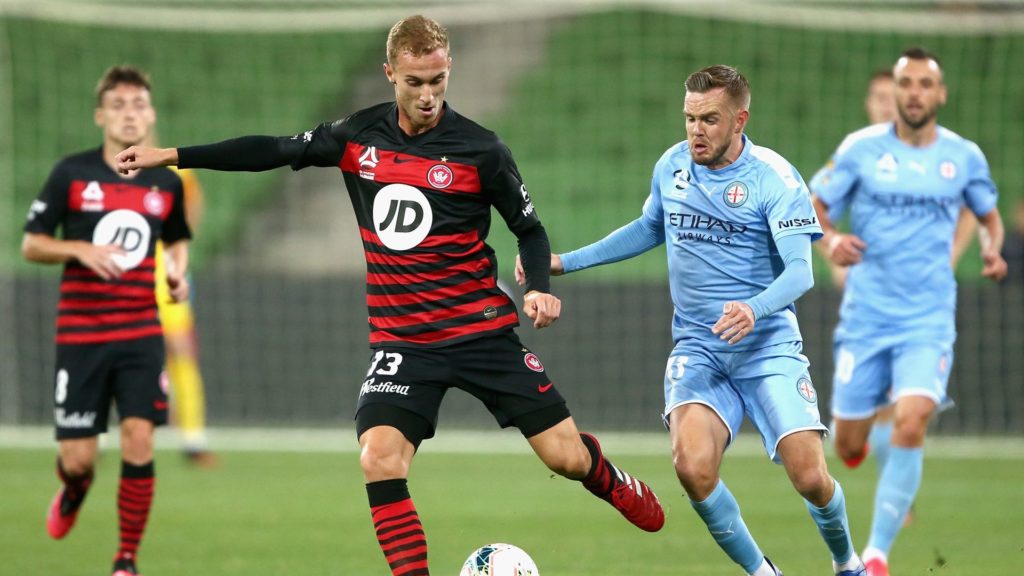 The A-League pre season is underway and clubs across the nation are gearing up to make up for lost time.

Neos Kosmos spoke to Western Sydney Wanderers defender Tass Mourdoukoutas while he was on training camp with the Olyroos in Sydney.

The 21-year-old had been training for the 2020 Tokyo Olympic Games before the event was shut down amidst the coronavirus pandemic, but his focus and determination has not faltered.

It was pretty natural to be honest. There wasn’t really anyone that pushed me to play, it was never that big in my family. My dad definitely helped me a lot in my career but it wasn’t the type to push a ball in front of me and tell me to play.

It was just something I enjoyed from a really young age and by the age of four I signed up with a club called the Marrickville Red Devils, because that’s where I was living at the time, that was the start for me.

Usually I love listening to music and keeping to myself when I’m on the bus on the way there or in the car. If anything I’m pretty relaxed, I’m not the time that gets massively pumped up or anything. I’m quite settled and like to talk to my teammates. You just have to be calm, not overthink anything, it’s just another game.

Right now off the top of my head I like Bryson Tiller and Tory Lanez, those sort of artists, along with Lil’ Baby and Gunna. Mostly American rap and RnB.

There’s a lot of different aspects in terms of football. People just think it’s just stepping on the pitch to play but there’s a lot of preparation, sacrifice and discipline that goes towards it. Like a lot of sportsmen or everyday people that are looking to be successful in their own line of work, I think discipline is really important.

If I could summarise it into one, I’m quite a social person and family person and with football you’re working on weekends, you’re travelling often around the country, you don’t really get the choice to have any time off that you want to take off.
For example, if it was a big birthday or wedding, that perhaps you could say ‘I can make it’ because it’s on the weekend, whereas with football you’re away that weekend, you miss a lot of big family events or memories, I think that’s the hardest thing for me. But you set it aside for the love of the game, I ‘m not going to let that get me down or stop it from letting me achieve what I want to.

I’ve scored two A-League goals now, my first A-League goal was a big memory. Aside from the club, playing with the national team, the Olyroos and qualifying for the Olympic games in January in Thailand, which was massive because I was away and left from Sydney on Boxing Day and was away for New Years and was in Thailand for a whole month. To make it all worth it and qualify for the Olympics was one of my biggest career highlights so far and probably will be for life.

It was tough (missing out on Tokyo 2020), but it wasn’t the first thing on my mind in terms of would there even be an A-League next year or how many other people were affected by the virus. they’re more important issues and it’s bigger than football in that sense.

It’s one of those things that you can’t imagine life without to be honest. The main thing for me is that it’s a form of expression, it’s a way of getting out of a regular life in terms of study and work. I think I’ve always loved football and always wanted to play it and I didn’t realise until a bit later the life I could live and the challenges that came with it but I’m so grateful to do what I do at the same time.

In terms of the impact, you see how much of a role model you can be for younger players or younger people and the generations that look up to you. I’m not a big player or household name yet but it’s something that really gives me great pleasure to know that you’ve got support, you have fans and people who care that you play for the Wanderers or the national team. It’s a real honour to play and you want to make everyone proud.

I’ve learnt how important is it to be mentally right because my poor performances, if I look back and reflect I know that I hadn’t prepared well throughout the week. Mentally, I wasn’t in it. Either I was unfit, or carrying an injury or I was tired. Your professionalism, your discipline and the way you approach each game are summarised into mentality.

If you’re positive or doing the best you can to prepare for a game, you give yourself the best chance to have a top game so like anything in life you need to prepare really well and know before you even get there that you’ve done everything you can to be successful and generally success comes through that. That applies to all aspects of my life.

Football related I want to be a consistent member of the first team and a leader in, someone that people can model a game off and really hold in high regard in all aspects of the game. I also want to stay studying, keep educated and stay at uni to work through that because I think that’s another important aspect of my football which is to get away from it every now and again through study. I don’t want to change massively, I just want to get better.

I don’t know to be honest, I don’t pack too many surprises. I suppose that I’m studying on the side or that I love getting out to the beach on most days, especially through summer. I love the beach. I live not too far from The Shire and Cronulla.

I’m usually not too good with sleeping after a game, I think it may be the adrenaline. I wish I could just go sleep, but I watch a bit of TV or talk with my family or jump on the PlayStation. I just chill out, listen to music and stay at home.

It disrupted everyone’s headspace more than everyone’s game of football. I was talking to a lot of people and I think it was the uncertainty of not knowing when you’d go back, if you’d go back, what the league would look like when you did get back, whether you’d have to be in a bubble and things like that.

What life would look like post-COVID was uncertain and that was for everyone. So that was a challenge; getting your headspace right and staying positive knowing we’re all in it together but it’s really easy to say that but at the end of the day it’s your life and you want it to be as successful or positive as it can be so it was really difficult in that sense. Especially when it came to knowing where contracts stood, not just financially but the length of it and where you could end up. You didn’t know where you were going to be in six months let alone at the end of the three year deal.

I’m definitely looking forward to playing a lot of games and really establishing myself in the team. I’m quite driven and I also want success for the team and to make the finals for the fans. Speaking of fans, I think a lot of people would tell you that we can hopefully get them back into the stadium, that would be huge for the A-League and for the community to have something to cheer for and go to on a Saturday night.