When your gods die 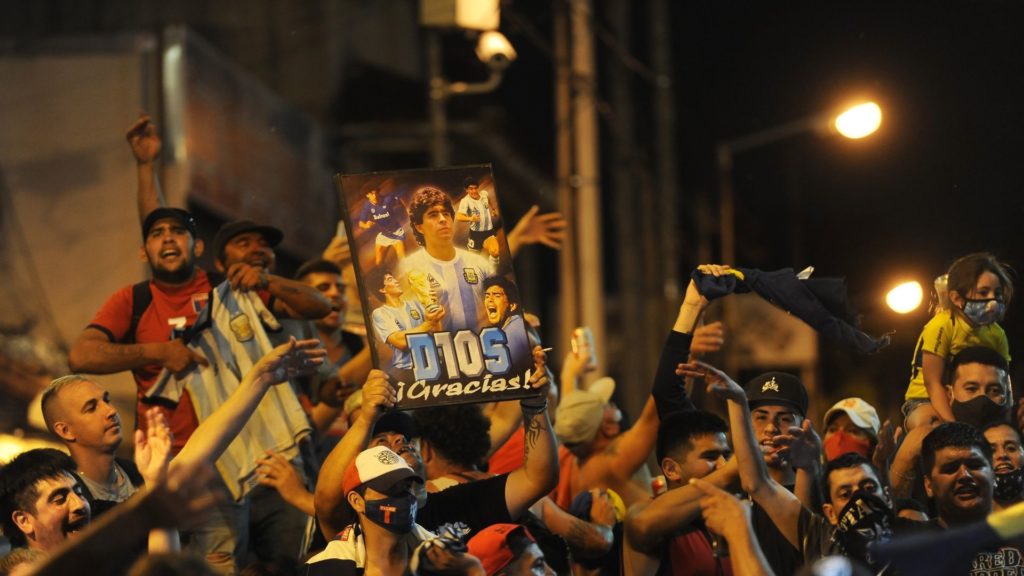 Supporters of former soccer player Diego Maradona gather at the door of the judicial morgue, in the town of San Fernando, Buenos Aires province, Argentina. Photo: AAP via EPA

Diego Armand Maradona is one of our generation. Unlike the cocooned safety of corporate sports today, Diego represented a different world. He was a tough, uncompromising and equally tragic.

We the children of immigrants watched him in awe. He was the champion of underdogs. He escaped the the slums of Argentina to become the king in the world’s biggest sport.

He was for us the antithesis of Anglo sports like cricket, AFL and rugby. He was bigger than any of their heroes.

Between 1976 and 1981 playing for the Argentinian Juniors, Diego scored 116 goals out of 167 games and raised them to heights they never knew. This was a time when Latin American football dominated and was superior to anything Europe had to offer.

Maradona was a true midfielder, a real number ten. He played deep and created plays like a conductor builds an orchestra to a crescendo.

Lionel Messi is a shadow midfielder, a 9.5 not a real 10, he occupies the front of goals waiting to score. Maradona commanded the midfield.

Diego’s passing, ball control and dribbling skills merged with his small stature (5.5ft), allowed him to manoeuvre better than other footballers; he would often dribble past multiple opposing players on a run.

Greatness is not based on the total trophies a player wins, but on the challenges they face. The two Scudettos of Napoli rank higher than the ten La Ligas Messi won with a generation of great Spanish teammates and riches of Barcelona.

In his homeland Argentina, Maradona refused offers to play for the wealthy River Plate and chose instead less money to play for his beloved Boca Juniors a working-class team.

The pride he took in being working class never left Diego. In today’s football world the gap between the poor and wealthy is greater than ever before. It is rare if not impossible, to see any athlete in any sport eschew money and glory for values as Maradona did.

In Italy, Maradona rejected big money from the north, from fascist born clubs like Juventus, to play for the southern underdogs, Napoli. In 100 years before, and thirty years since, Napoli has not won a Scudetto without Diego.

Maradona did what no one ever could; he won two Scudettos in the 1980s for Napoli. That will go down as the two greatest achievements by any player in club football history.

He upended the league and angered the traditional powerhouses of Northern Italy. He instilled pride in the South.

Juventus fans spewed vitriol directed at Napoli and its fans as an expression of a national divide between the North and South. Maradona became the symbol of the South’s defiance against the North.

Naples was seen as backward, hardly a part of Italy, and in the words of one commentator, as “African.” That racism still plagues Juventus and the north of Italy today.

In the famous 2019 documentary Maradona we see Napoli’s match against Juventus, in Turin, the fans sing, “Sick with cholera! You never washed with soap! Napoli shit! Napoli cholera! You’re the shame of Italy!”

READ MORE: Diego Maradona from the Buenos Aires shantytown to his last goal against Greece

Diego was a symbol of resistance for us ‘wogs’ in Australia and for Latin Americans and Hispanics in the US. He was a hero for the impoverished in Latin America and the poor in Southern Europe.
Maradona’s stocky frame and swarthiness, his unruly hair, his slip-ons, and even his bad habits, gave us hope. If he could make it, so could we.

The Juventus coach called on his players to break him. And they tried with what are now illegal tackles. Full bodied back tackles and slide tackles with metal sprigs up. He danced around them whereas tackles like that would have permanently damaged anyone else.

Then came the famous 1986 World Cup. It will go down as the greatest performance by an individual at international level.

The Australian media only highlight the ‘hand of god’ incident. It seems clear (now) that Maradona handballed a goal into England’s net to beat them in the quarter finals. Maradona saw it as retribution to England’s ‘Falkland War’.

In 1986 on Spetses, a largely British holiday island in Greece, when Argentina won the Greeks erupted. The Brits were confused and asked “Why? Why are you supporting the Argies?”

One of the Greeks simply put it, “They are us; we are them; they are everyone who’s felt the arrogance and steel of the British.”

Maradona paid a heavy price in his personal life. He was manipulated and used by the Neapolitan mafia. He became addicted to cocaine and booze.

He tried to recover a number of times with mixed success. He sought the company of those he admired like Fidel Castro in his impassioned belief that poverty is not something that should bring shame and equally something to be fought.

He was a genius and an artist in football. He had courage, showed leadership and tallied football achievements more than any other footballer.

Diego was a symbol of resistance for us ‘wogs’ in Australia and for Latin Americans and Hispanics in the US. He was a hero for the impoverished in Latin America and the poor in Southern Europe.

Maradona’s stocky frame and swarthiness, his unruly hair, his slip-ons, and even his bad habits, gave us hope. If he could make it, so could we.

For many Argentinians he offered a way out of poverty and imbued his nation with pride. Especially after the invasion of their sovereign territory by the English.

Maradona rose from the ghetto to the throne; and he fought racism and elitism with overpowering skill and grace.

Maradona was us – a southerner. And like many of my generation Maradona had indulgences, flaws and addictions.

He was god. Vale Maradona.