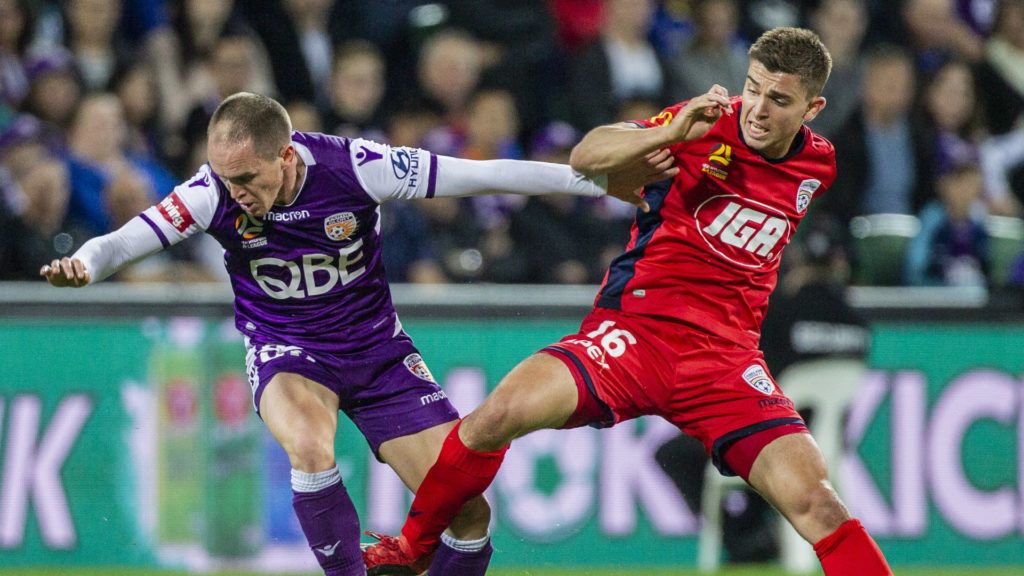 Neil Kilkenny of the Glory and Nathan Konstandopoulos of Adelaide United during the A-League Semi Final in 2019 Photo: AAP via Tony McDonough

The A-League pre season is underway and clubs across the nation are gearing up to make up for lost time.

Adelaide United midfielder Nathan Konstandopoulos had taken a hit early on in 2020 after doing some damage to his ACL, but instead of lamenting what could have been, he used the lockdown period to focus intently on his rehabilitation and study.

The only thing that rivals his love for football, is his love for yiayia Sofia who he cites as his “number one fan”. She made it to every single junior game he played and would sweeten the deal by bringing post game lollies for all the players.

Nothing however would beat the moment where yiayia Sofia watched on from a corporate box as the young football player scored his first ever A-League goal at Cooper Stadium.

The 24-year-old also takes much inspiration from his pappou Thanasi who, in his 90’s, is still “fit as a fiddle” and stays cheering alongside yiayia.

My dad played his whole life, so it’s been passed through from him basically. As long as I can remember I’ve been kicking a ball. I started properly training when I was four with my dad and then my little brother Kristin joined in and we were constantly kicking a ball around the backyard.

I’m one of those people that likes to relax, treat it like a normal day and do things to keep myself busy. When it gets to maybe an hour or two before the game I like listening to music, I feel like that’s a good motivator. I like staying calm, I feel that it’s benefitted me most going into games rather getting all anxious and stressed. If you put too much emphasis on it and get stressed about it, it ends up impeding on your performance.

As I’ve gotten older, it’s been more about the mental side of things. In football a lot of the time you’re dealing with setbacks, you’re dealing with pressure and things in a normal nine to five job that you’re probably not dealing with. It’s not something you’re really trained to cope with.

That’s been one thing I’ve had to focus on and really having that inner drive, self confidence, self belief and to block out that exterior noise to focus on your performance and do the best you can. It’s something I’m still developing every day. It’s one of the hardest things to do, but it’s probably what separates the best players from the normal players.

Adelaide United have won the FFA Cup a few times now, so I’ve been a part of three winning teams, which is pretty exciting. Some iconic moments have been playing in semi-finals and in the finals series in the A-League, that’s been a massive career highlight for me. Those are pretty up there for me, which not many people can say they’ve done, I think that’s pretty cool.

It’s huge. I’m just coming off a long term injury at the moment so I’ve just realised how much it does affect your life. It’s the day to day stuff. It’s difficult to schedule things with friends, there’s a lot of sacrifice involved especially when you’re younger. A lot of your friends are partying and you have to focus because you’ve got a game the next day. Something that I realised from a young age is that if you want to be good at it you have to sacrifice some things.

I’ve learnt that I’m a very hard worker, that anything I do, I like to do 100 percent. So when it comes to anything now, like study, I feel like my application to my football has come out in other areas of my life. I try my best at everything that I do and it has given me a good work ethic, discipline and the ability to work with other people.

These are skills that will carry throughout the rest of my life and I can thank football for that.

I really think this is going to be a massive season for me. I want to take that next step to be a player that helps my club make an impact. I just want to have a really good season and play most games throughout the year and help my team find success. If I apply myself to the team then at the end of the day, the individual accolades will come.

The ultimate goal, and I think you’ll find this with every A-League player, is to make the move overseas eventually. If I try my hardest here, hopefully I can make that dream a reality.

I don’t think many people relate sports players with studying so it might surprise people that I’m studying law. I also had a blackbelt in Taekwondo when I was younger, my old man put me into classes to learn self defense and I loved it. I ended up becoming a black belt, but I’m pretty nice so you wouldn’t guess it.

I think everything helped me when I was younger. That’s another thing in regards to discipline too, I don’t think you get that as intensely in any other sport unlike martial arts.

I did my ACL back in February and that’s a nine month recovery period, so I’ve only just come back in now. But it happened at a time where I was just getting my rehab started, then all the gyms closed, so it was a little bit difficult and scary.

I had to come to terms with it because I could only control what I could control. I made my home gym, I worked from home and did everything that I could. It kind of work out to be, I wouldn’t say a blessing because it’s a terrible word to use in these circumstances, but in my circumstances it ended up helping in a way because I got to focus on my rehab and my study and everything culminated into a nice process for me.

I wouldn’t say I’m thankful for it, but in my circumstances I didn’t have to miss out on much football because everything got cancelled and trainings got stopped. It wasn’t too bad for me.

I think it’s going to be a fresh start. It seems everyone is approaching this season a little differently, there are going to be a lot more young players in the league. There’s going to be a bit more buzz about it because it’s been a while since the last season. It’s got a different feeling to it, it’s a bit more fresh and young and vibrant. There’s a new team coming in so I think it’ll be a really good season.

I think its a good opportunity to reassess things and then go in all guns blazing. I feel like it has the potential to be the best year. Once restrictions ease up, so that fans can start coming out, it’s something that people have been waiting for to go and finally see their favourite teams play.