Alex Proyas, the iconic director of The Crow, and Dark City (a film considered an inspiration for The Matrix trilogy, talks exclusively to Neos Kosmos about his latest award-winning film projects in spite of lockdowns, the creation of his Sydney production studio and the dark fate awaiting cinema as the place to view movies. 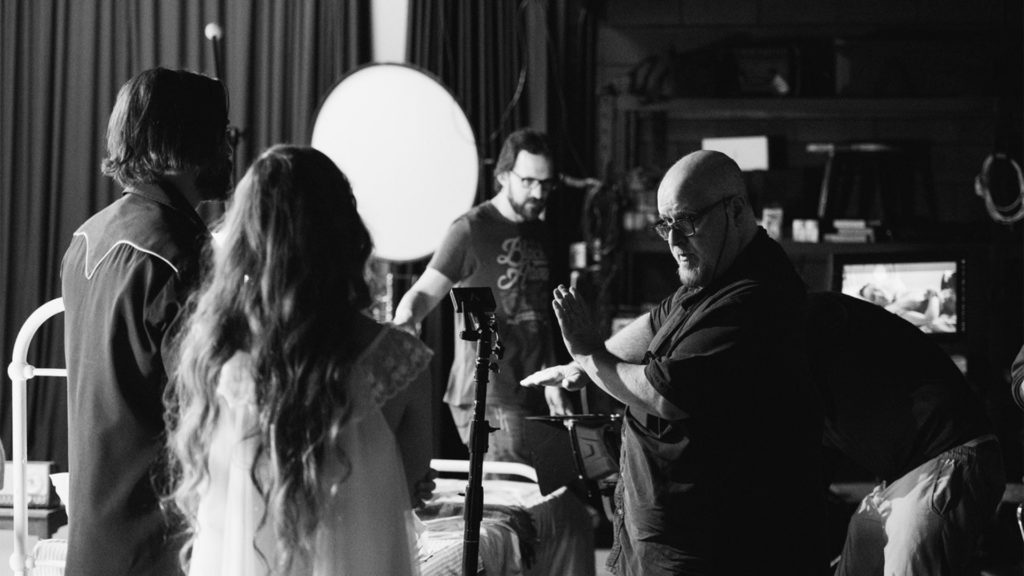 Alex Proyas directs his cast for the short horror film The Mask of the Evil Apparition set for release in early 2021. Photo: Supplied

If there was something COVID-19 could not do, it was to keep filmmaker Alex Proyas from getting on with his work. The pandemic may have slowed down plans to push on with a feature film starring Guy Pearce and it slowed down the development of his Heretic Foundation Studio but down is not out for the man who brought us The Crow, Dark City and I Robot.

Even as the institution of the cinema as the place we go to watch movies appears to be entering its twilight years, Mr Proyas is reluctant to blame COVID for this development.

It is a process that had begun before COVID was a world-threatening virus, he told Neos Kosmos. Its demise can be laid at the feet of Hollywood and its monolithic adherence blockbuster franchise films of Star Wars and the superheroes of the Marvel and DC worlds.

“The franchises dominate at the cost of over films. There is no variety in the storytelling. There were all kinds of movies before now where there is just the superhero.”

“The franchises have dominated at the cost of other film genres. There is no variety in the story telling. These are known characters and situations and the big screen is struggling to re-create this situation, which is bizarre,” Mr Proyas said.

Better technology in the form of bigger screens and sound has meant that the cinema experience can be enjoyed at home and at a lesser cost.

He said the obsession with box office returns had led the film industry into a corner. In 2016, Mr Proyas big budget film Gods of Egypt failed to make the money it should have and that was a bitter pill to swallow but box office receipts are not what drive him. A look at his online activity shows a man deeply devoted to his craft and ready to engage anyone about it.

“Film is more of an industry than any other art form. You have to be aware of the market and the forces affecting the industry.

“But as a film maker you also have to be the ruler of your own destiny.

“I have never been one to succumb to pressure. Part of the responsibility of a film maker is to come out with new ways to get films out there. As the technology changes, so you have to find other ways to work.

“I am only seeking the opportunity to make enough money to pay for the next production. If I can lower the overheads of production, I can keep the studio heads away and do what I feel is right for the film. As the costs (of the film project) go down, so I have more control and fewer battles to fight with the executives.”

But for the onset of COVID-19, 2020 would have been a bigger year for Mr Proyas. In February, he launched his new production centre Heretic Foundation in Alexandria, close to Waterloo where he grew up in a housing estate in Sydney’s inner west.

“We have spent much of the year setting a virtual production studio that is allow of all levels of film production. We have a green screen set up that can replicate any setting and will be cost effective.

“It changes the paradigm of the way films are made. It has been pretty complicated to get the technology to create the work flow. We are close to finishing it,” he said.

The COVID restrictions did not halt film production. His company Mystery Clock Cinema brought out the short experimental film Strange Nostalgia – a unique “remote collaboration” completed despite lockdown that has garnered a host of Best Experimental Film Awards.

“All the festivals are web-based, so there is no chance to visit all these places. Still, it has been a wonderful experience,” Mr Proyas said.

Another project that should reach your screens in the new year is a 20-minute horror film entitled Mask of the Evil Apparition. Production began a week before lockdown in March.

“The team broke up after a week and no one knew when we could resume again. We re-grouped after restrictions lifted. We have put out the trailer for the film on You Tube and the film should be ready early in the new year.

“The Cannes Film Festival board is interested in it and it may go through the festival circuit or on the internet,” Mr Proyas said.

The advent of COVID-19 also dented Mr Proyas’ plans at the beginning of this year for the full-length feature film New Country that was set to star Guy Pearce.

“We were in the early stages of preparatory financing and we will be picking up the pieces to start filming in the new year,” he said.

“COVID has been arduous for creatives. You have to be a masochist at some level to be a film maker, and a sadist too. It is a test of will and stamina. It is part of the film maker’s DNA to take up a challenge and COVID is one more challenge and we have had to work out a way (around it).

“The remote collaborations have been great fun in the end and it has been creatively liberating to direct someone over the phone. It is a different approach that leads to better ways of doing things.

The pandemic is not over and while the filmmaker is not going to make a film telling the COVID story, the virus will have a presence.

“Any story now has to be informed by what we have been through (with COVID). I am to shoot a short film over the next few weeks. My actor will have a mask on even though the film has nothing to do with COVID, it is the one detail by which COVID will work its way into the film.”

Speaking about the Australian film industry, Mr Proyas said that one of the main problems was that there was not a large enough population to support a national film industry.

A successful industry here had to start with government support and incentives in line with the Canadian model a country with a similar population size to Australia.

READ MORE: Nostos – A movie that celebrates the lives of the Early Greek Australians

Another problem, he said was the fact that the Australian film making mindset was to think of their compatriots as competitors for limited resources.

“People see an imaginary pot of resources and everyone wants to grab at for their own survival. We do not really know enough of each other as filmmakers generally.

“In the United States I was amazed at how open everything was. Everyone wanted to exploit you as a young film maker. One of the secrets to the US success in films is their openness.

“In the US, I cannot wait to bring other film makers and engage their opinion on my work before I release it. It is a non-threatening and collaborative approach and I hope we can bring that here,” he said.

It is an approach that he will be highlighting with the opening of Heretic Foundation.

“It’s my studio… though I want it to be YOUR studio too. Let’s make our damn movies! Nothing can stop us now!” Mr Proyas posted on Facebook.