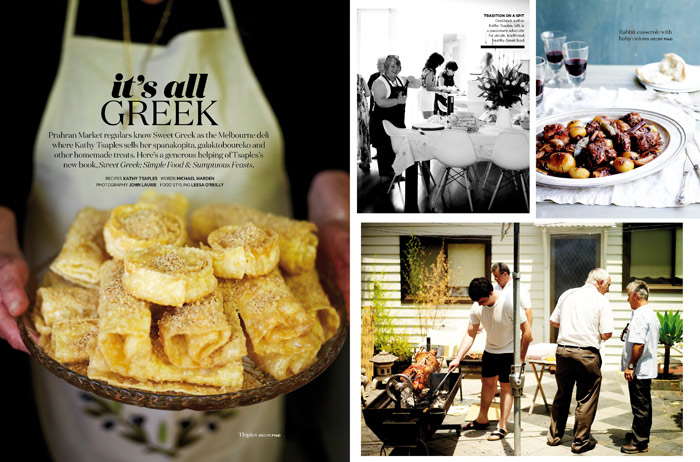 Kathy Tsaples is still reeling from the successful launch of her debut cookbook Sweet Greek and now has another accolade to add, with an eight-page spread in the July issue of Australian Gourmet Traveller. The cook, known for her home-style Greek delights at her shop The Sweet Greek, in Prahran Market, Melbourne, has been treated to this write up for providing Victorians and now Australians with traditional Greek cooking from the heart.
“We are thrilled to feature Kathy’s beautiful book in our July issue. It’s such a wonderful celebration of Greek food and culture which are one in the same, and it’s always a joy to feature talent from my hometown in the magazine, especially a woman whose passion for food is so heart felt,” says Anthea Loucas, editor of Australian Gourmet Traveller tells Neos Kosmos.
Tsaples started her cooking journey later in life and ventured into providing Victorians with home cook meals from her shop The Sweet Greek, but with so many of her customers asking ‘how can I make this at home?’ she knew she had to document her recipes. But it wasn’t just for that; it was to pass all this knowledge that she had been given from her mother down to her children and her children’s children. And, unbeknownst to her, to thousands of Greek Australians of first, second, third and fourth generations and also Australians with a strong passion and desire to recreate their favourite Hellenic dishes.
“I’m just a simple home cook, so it’s an absolute honour and privilege,” Kathy says of being featured in the Australian Gourmet Traveller.
“I am just overwhelmed by the fact that they considered my book and food good enough for the Australian Gourmet Traveller.”
Kathy is humbled by the spread that features her traditional and homely recipes, but adds that these recipes are important to her and the food is something she wants Australians to become familiar with.
The feature spread shows how Greek food brings people together – to celebrate, to laugh, to cry. As Kathy says, food becomes part of the ‘other’ Holy Trinity of Greek culture – language, religion and food.
“The key to me is to sit around the table with family and friends and that could be something as basic as psomi tiri and elies or a lamb on the spit,” she says, adding that Greek food lends itself to following our culture and traditions.
But her cookbook Sweet Greek is about a whole lot more too. It’s about honouring the migrants that first came to Australia, and honouring their traditions through food.
The July edition of the Australian Gourmet Traveller is available at all good newsagencies. Sweet Greek: simple food & sumptuous feasts is now available in all good bookstores. For more information on where to purchase, contact Melbourne Books on info@melbournebooks.com.au Visit Kathy at Sweet Greek, Stall 702 Prahran Market South Yarra, Melbourne. Tel (03) 9826 0608.