Joy be to the twelve days following Christmas

The Greek festive season in the land Down Under 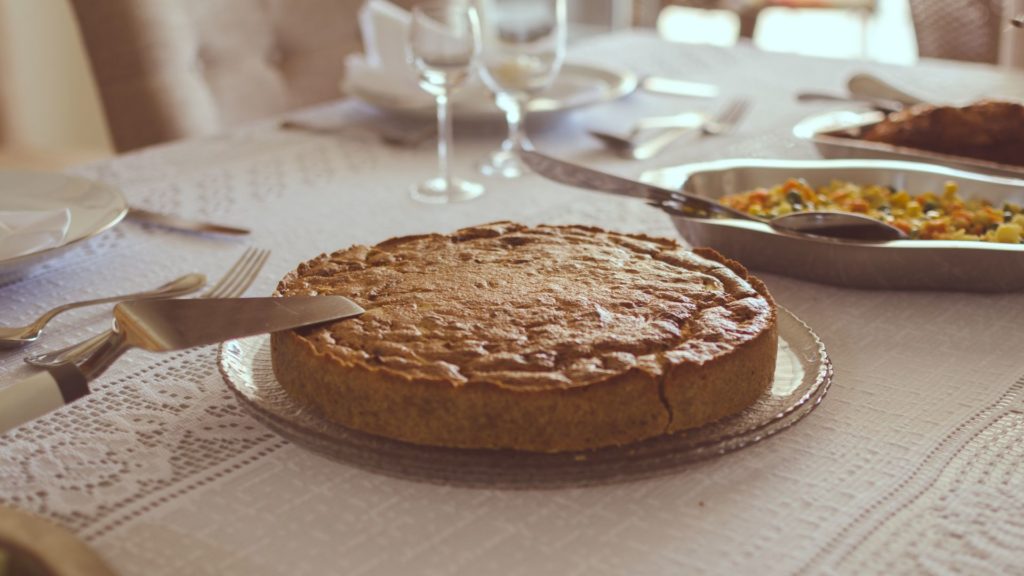 Joy be to the twelve days of Christmas, that usher in the New Year. While rejoicing in the birth of the Saviour and the imminent demise of the year COVID, I was privy on Christmas morning to the following exchange between two Greek-Australians who appeared to be in their early forties, waiting outside church to collect their mothers, in almost matching tracksuits.

“What?” asked the second, mystified.

“You mean Χρόνια πολλά,” the second corrected him, as he adjusted himself. “Xριστός Ανέστη is for Easter.”

“I don’t know,” the first snorted.  “It’s the same shit. Why can’t they say Merry Christmas like normal people?”

When, returning to his native Tarsus, ancient Greek philosopher Athenodoros had his front door smeared in excrement by partisans of his rival Boethius, Athenodoros wrote: “One may recognize the city’s illness and disaffection in many ways, and particularly from its excrement.” What we, on the other hand, can recognise from the linguistic excrement of our own philosophic tribe, is purely a matter of digestive conjecture.

This festive season, I witnessed the advent of a new Christmas greeting, that up until now, has not been widely used within Greek Australia. According to the fashion of the times, the greeter now wishes one: Χριστός ετέχθη, (Christ is Born), whereupon one is compelled to respond Αληθώς ετέχθη (Truly He is Born), proving that my first tracksuited companion was on the right track after all.

One of my most cherished memories is of a now retired Greek Communist Party MP telling me emphatically when I tried to raise with him, the plight of the native Greeks of Northern Epirus under the unspeakably vile Hoxha regime, that we should all be grateful to Albania because Stalin was Albanian.

When I then attempted to explain to him that Albania is just a Latin term that means white land, which is why it was applied to Albania, Alba (Scotland) and Caucasian Albania he did not seem to have the capacity to absorb this fact.

When I also told him that Caucasian Albania was in modern day Azerbaijan he appeared not to want to listen.

Following up by informing him that  despite the claims of some of his comrades in Melbourne, Stalin was from Georgia and that applying his logic, since in days past Georgia was referred to as Iberia, we should also be grateful to Spain, which was also called Iberia, the comrade in question called me a counter-revolutionary Trotskyite. Nonetheless, it was from him this retired KKE MP that I received the following festive sms this year:  «Χριστός ετέχθη!» Querying by return text his choice of greetings of the season, the tovarisch replied that from an ideological perspective, such greetings were perfectly acceptable, as they are ultimately derived from and are a claque of the Russian: Христос рождается.

The theological logic is impeccable and consistent. I first met said MP in a kafeneio in Greece many years ago around Christmas time, where moved by the spirit of tsipouro, I launched into a solemn rendition of “God Save the Tsar.” The MP and his friends, believing I was interpreting a Soviet Komsomol Anthem, were moved to tears at the loss of their gods.

I recall through the fog of alcohol and stale cigarette smoke, attempting to console him by explaining that according to 1967 Star Trek episode “Who mourns for Adonis,” the gods of Olympus did not die, they merely retreated to Pollux IV, unable to maintain their power without the love of mortals. For all we know, the Politburo, encased in a Sputnik is orbiting Uranus as we speak, looking for that self same love.

It is for this reason that I refrained from riposting “Truly he is born.” Instead, quoting Russian  poet Anna Akhmatova, I lamented: “If a gag should blind my tortured mouth, through which a hundred million people shout, then let them pray for me, as I do pray for them.” Mercifully, I received no response.

The greeting Χριστός ετέχθη, either as a fad or a Moscow Patriarchate Trojan Horse, is at least explicable, and I especially love its variant, Χριστός ετέχθην (Christ, I was born!). I take advantage of this platform to proclaim to the men and women of Greek-Australia, that if one can pronounce Feliz Navidad, then surely one can say Καλά Χριστούγεννα, or even Χριστός ετέχθη. Furthermore, the next time a Greek-Australian attempts to wish me Feliz Navidad where the second word rhymes with dad, (a phenomenon which can only be ascribed to shopping centre muzak penetration), I will throw my Italian next door neighbour’s panettone at them, the Juventus themed one, that makes one remember certain soccer chants of the Eighties.

READ MORE: The history of the vasilopita

Engaging in giving Greek-Australians attempting to purchase a panettone from my local Greek-Italian fusion deli instead of a Vasilopita, the death stare, is one of my favourite turn of the season rites of passage. One day before New Year’s Eve, I sallied forth to said deli in search of the requisite ingredients for the construction of the Vasilopita and panettone-purchasers to persecute. It was as I waited in the socially distanced queue,  that I heard the unmistakable nasal cadences of a compatriot lisp excitedly: “We are going to make our own home-made gluten-free William-cake this year.” Instantaneously I unravelled the constituent parts of the linguistic sacrilege. Bill is the Australian equivalent of Vasileios, just as Jim is of Dimitrios, and when Greek-Australians seek gravitas, Bill becomes William, just as Jim becomes James and Aristogeiton becomes Trevor. Saint Vasilios is too exalted a personage to be referred to as Bill, so William he must become, and all this linguistic acrobatics from a lady wearing activewear designed by a person who evidently cannot even spell Jagged properly. So perturbed was I, that I swung around and almost took out the eyes of the person behind me with a can of chilli flavoured Palirria Dolmades.

“Hey! Watch where you are going! Are you blind or something you f….ker?” the formidable lady with the crocodile skin and the triskelion midriff tattoo growled. From an inscription from Silandos in Asia Minor dated 235AD we learn that a certain Theodoros offended the Iranian moon god Mes, who was widely worshipped by the Greeks in the area of the time, by committing fornication. As a result, he was struck blind. His confession went something like this:

“I have been brought to my senses by the gods, by Zeus and the Great Mes Artemidorou…I had sex with Trophime the slave of Haplokomas, the wife of Eutychis in the praetorium… While I was a slave of the gods of Nonnos, I had sex with the flautist Ariadne…I slept also with Aretousa.”

In the text of the inscription, the hapless Theodoros, who no doubt feels compelled to make a clean breast of things, states that “I had Zeus as my advocate (παράκλητος)”. This is, coincidentally, the same word used in the first epistle of John, where it is stated that: “If anyone does sin, we have an advocate (παράκλητος) with the Father, Jesus, Christ the righteous.”

With Zeus advocacy, the council of the gods in a heavenly court entreated Mes, who appears here to be more powerful than the Olympians to forgive Theodoros. Ultimately, Mes thought it good to restore Theodoros’ sight.

Extricating myself from the συμπλοκή, I mused not only at how an effective advocate could seek forgiveness for my negligence by highlighting my righteous anger at the linguistic and culinary blasphemy preceding my collision, but also, how in the mid second century BC, the historian Polybius coined that very term (συμπλοκή) to describe the connectivity throughout the Mediterranean occasioned by the Hellenistic kings and the Roman expansion. Some forms of connectivity, especially those induced by the confluence of panettone and William-cake are best left well alone.

READ MORE: At a Greek Christmas the table groans with a rich and varied fare

Moments later, I was self-checking out my groceries at the supermarket and reflecting that self-checkouts are inherently culturally imperialistic, entrenching the dominant monoculture by not offering the menu in the major community languages, when I overheard two ladies, an elderly woman and her daughter conversing next to me.

I couldn’t help myself so I interjected:

She left the coin in the change tray and I, afflicted by a fabricated superstition that suddenly seemed plausible, did the same.

This year, no one won the coveted Vasilopita coin, or as it is now feculently marketed by Greek-Australian purveyors, the “lucky token.” Just as the pita was cut and the festive company leaned forward to receive their piece, I observed, that in the Scholium to Aristides, it is mentioned that when the goddess Demetra was searching for Persephone, the king of Eleusis, Celeus, pointed her in the direction of Hades. As a reward (μισθός) Demeter gave him the secret of bread and allowed him to possess her body “illicitly.” All of a sudden, everyone lost their appetites and I face the prospect of traversing the New Year while being given the silent treatment by my nearest and dearest. Aesthetically unmoved, I console myself by reciting choice verses from Cavafy’s Satrapies, ample consolation for the year to come.

“What a calamity that you who are made/ for beautiful achievements and renowned,/ should always be, through your hard fate, denied/ occasion and success; that you should always/ be hindered by the mean observances,/ the littlenesses, and indifferences.”