Mark Zuckerberg and his wife, Priscilla, celebrating their 7-year anniversary at the Acropolis. Photo: Facebook

One can do naught else but praise Social Media god Mark Zuckerberg and his wife Priscilla Chan for posting a selfie from the Acropolis a few years ago, which they visited as part of their wedding anniversary celebrations.

At that time, the deity of online voyeurism gushed: “Celebrating 7 years of happy marriage at the temple for the goddess of wisdom.”

Presumably he meant the Parthenon and not the home of Anna Giannopoulou-Daskalaki, whose manifesto “My Greek Drama,” has absolutely no resemblance either in style of content, to Mein Kampf, even as we defer to her superior intellect in all things pertaining to Hellenic modernity.

Here in the Antipodes, which has its own sacred rock with ancillary immortals sharing only a passing acquaintance with helmeted, souvla carrying Athena, not much wisdom is received from the Sacred Rock of the Acropolis. Instead, we tend to receive our intellectual sustenance through Neos Kosmos newspaper. Whereas one group of devotees will argue that the holy spirit of Neos Kosmos emanates directly from its print manifestation, others will decry this as a heresy, strenuously maintaining that the said spirit proceeds from the online version, without additions of any kind. Another schismatic group headed by the unspeakably charismatic Fotis Kapetopoulos, who has gained an immense amount of converts, espouses as its creed that the spirit of Neos Kosmos proceeds from its online hypostasis, through Facebook and is co-eternal with both, variously emphasising or ignoring the hypostatic properties of each Neos Kosmos journalist, all the while re-affirming that through the spirit of Neos Kosmos, mediated by Facebook, whom they term after the apokatastasis of the Hard Drive, the Parakeet, (because the Paraclete domain name was already taken), they all share a single divine substance, quality and power. In this way, Neos Kosmos is justly said to abide in the Mediator Facebook in a special manner, for within said social media platform, it abides of grace for that particular object, but in itself, Neos Kosmos abides substantially for all ends. The orthodox equivalent of a theologoumenon, this particular fact is known as a Neokosmoumenon among seasoned veterans.
When not engaged in fervent Facebook online debates with devout pagans as to whether modern Orthodox Christians share a blood guilt for the murder of the Alexandrian philosopher Hypatia millennia ago, or disputing whether Agia Sophia is a more perfect building than the Parthenon, arguments which are inevitably buttressed with copy paste slabs of text from Wikipedia, or among the more honest and indolent, a posting of an entire website, I am wont to muse as to whether sacrificing to the ancient Babylonian god Marduk is tantamount to worshipping the modern media god Murdoch, at which time someone will inevitably direct me to the Neos Kosmos facebook page, whence I derive all of my news, in rolling coverage format. 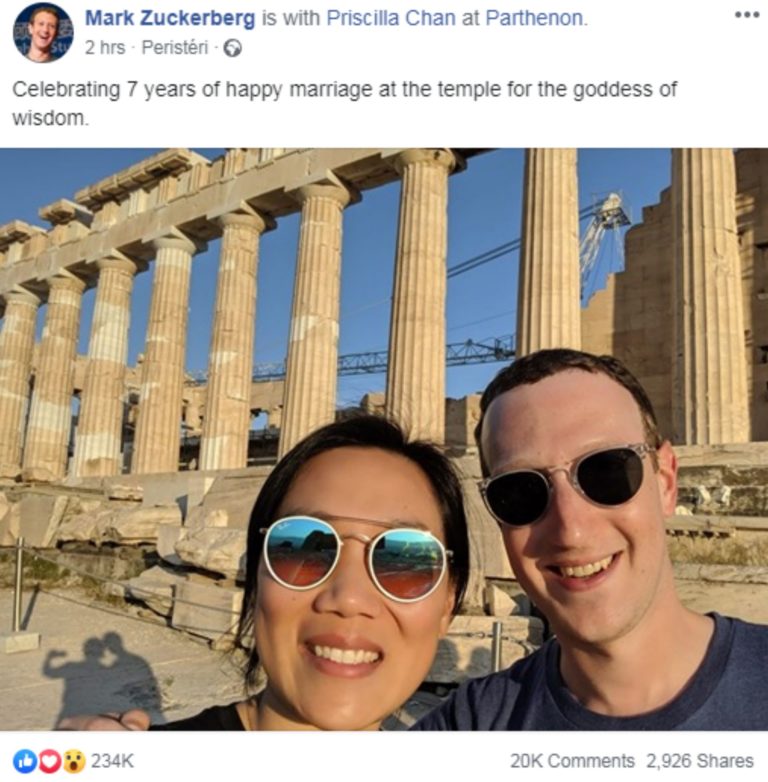 Not only is the news digest concise and uniquely Greek-Australian, therein can often be discovered breaking stories that do not exist anywhere else, especially with regards to the sexual proclivities and frequency of prophylactic use of our Helladic cousins. I greet them and the ensuing sinuous bilingual reader commentary, with the reverence and awe that is due the revelation that most of our kafeneio culture has especially in the lockdown age, become transubstantiated online, affirming that the media essence of Neos Kosmos neither is begotten nor begets, but exists in and of itself through the efficacy of its word, even though it may share the outward characteristics of any other media publication. Put in simple theological terms, Neos Kosmos is divine.

This should not be a surprise. After all, the mythical heroine Media, possessed of magical abilities, a mortal with divine ancestry, is the font of all modern media, social or otherwise, though the form of social distancing she practiced, murder and conspiracy to pervert the course of justice by absconding on Helios’ dragon drawn chariot, is these days, considered rather extreme and yet another ominous harbinger of Global Warming.

Acropolis-adoring Mark Zuckerberg evidently knows that he must offer due homage and tribute to Media, for it is upon her dreaded social platform that he dominates the world. After dispatching her children with Jason, Medea flew to Athens where she married Aegeus and attempted to poison Theseus, a potential rival in a hostile takeover. Thwarted in this and unable to overturn Athens’ inflexible media ownership laws, possessing as she did, one hundred percent of the shares in herself, she then ended up in Persia, her son Persus becoming the genarch of the Persian race and in consequence setting in train a course of events that would engender such Persian media celebrities as Mahmoud Ahmedinejad and Hassan Rouhani, all of whom are quite eager to grant Zuckerberg free distribution rights to their news sites.

I could post some bug and cookie-filled Greek websites that take half an hour to load, lend themselves not at all to scrolling and feature pop up advertisements with such frequency that they should carry a health warning, on the manner in which Alexander the Great’s army brought the secret of media, social or otherwise back to Greece, which is why, by the way, Mark Zuckerberg should be paying Greece royalties, as should all other media magnates throughout the world, but I digress. Instead, I merely draw the reader’s attention to our august Prime Minister, Scott Howgoodisaustralia Morrison, who, ignoring Media’s provenance, her intensely vindictive nature and the fact that being a princess of Colchis, she is probably originally Georgian in origin (I won’t tell if you won’t), labours under the opinion that Mark Zuckerberg should pay for the distribution of media from Australian news sites. Consequently as of the 18 February, Facebook users are effectively blocked from sharing Australian online news articles and I am no longer met with articles about the latest hotel quarantine measures accompanied by commentary calling for Dan to be placed in stocks and pelted with soggy manifestos from the 2019 Labor Conference, penned by hysterical Greek-Australian fitness instructors, whenever I consult my feed.

Mysteriously, Neos Kosmos appears to be exempt from this blanket prohibition against Aussies. I am still, as I pen these words, reposting articles on my wall about the free online tuition in the Pontian dialect offered by Neos Kosmos stalwart Grigoris Sembelidis, even as I draft an email to Ivan Savvidis politely asking him to ask Putin to suggest to Zuckerberg to offer Pontian as a user interface. Is this because Neos Kosmos is not considered to be part of the Aussie media? Is ethnic media considered to be so marginal to the rest of the Australian polity that it does not rate a mention or deserve consideration for exclusion from Mark Zuckerberg’s cyber realm? Or are there other darker nefarious deeds and purposes and play here?

Absolutely not. For while our Prime Minister may not know it, Mark Zuckerberg certainly appreciates that our Prime Mover in the first instance of Neos Kosmos’ conception, by singular grace and privilege, in view of the merits of Media, informer and enlightener of the human race, was preserved free from all stain of unoriginal content sin and thus exists outside the world of corruption. Being an erudite fellow who has visited the Erectheion as well as the Parthenon, Mark Zuckerberg also understands the concept of hubris as pertains to all those mortals who have the effrontery to dishonour the gods. For not only is Neos Kosmos of one substance with Media, it is also consubstantial with the greatest news hound of all, the maker and conveyer of all things newsworthy, Hermes. As a psychopomp and god who is able to easily cross boundaries in the dissemination of tidbits of tidings, it should be noted, by Facebook feudal lords and Prime Ministers alike that there is but a brief but uncomfortable, itchy distance separating the letter m in his name from the voiceless bilabial plosive P.

On this historic and hallowed day, when the forces of international capital, media monopoly and sovereignty bow down to the might of our community and its mission to retain its sense of cohesion by keeping each other informed and propagating a truly authentic Greco-Antipodean discourse, let us give thanks to Neos Kosmos for vanquishing the dragon of counter-revolution and living up to its name, bringing about a brave New World.