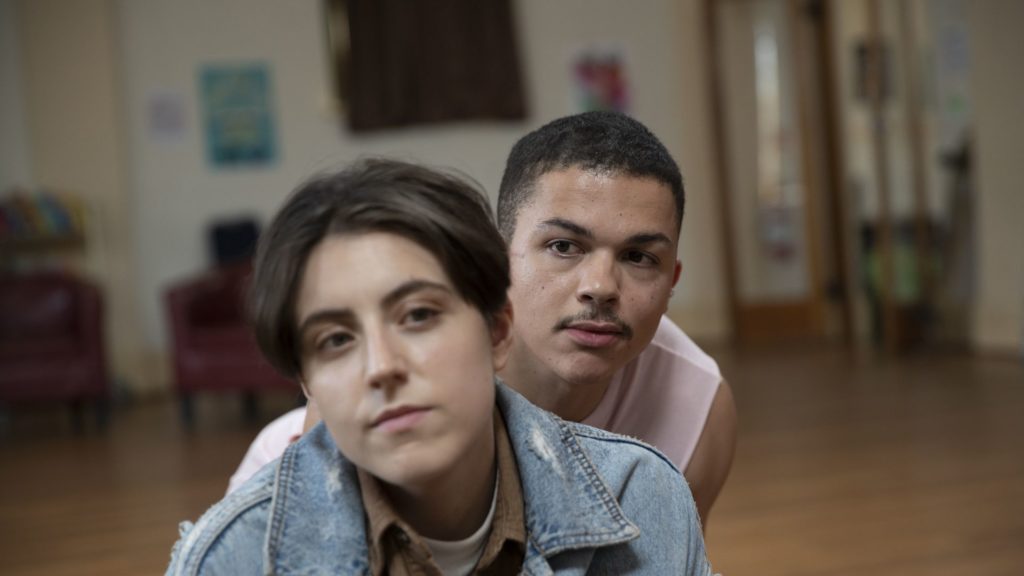 In role, Yiana Pandelis with co-star Reece Noi in a scene from the film “Unsound”. Photo: Supplied

Yiana Pandelis, a young Australian Greek actress who is profoundly deaf is the leading actress in the recently released Australian independent film “Unsound” and she confounds many stereotypes in this challenging role.

“Unsound “, a film by Wise Goat Productions, challenges a host of preconceptions. In it Ms Pandelis plays Finn, a deaf young emerging trans man who is an Auslan -only speaker. Finn runs a night club for the deaf with his father (Todd McKenney). The story focusses on the relationship between Ms Pandelis’ character Finn and disillusioned musician Noah (Reece Noi who appeared in “Game of Thrones”).

To be the lead actress in any feature-length film is a big responsibility but “Unsound” also challenges conceptions of gender-identity, sexuality and disability. The demands of the role were a challenge that Ms Pandelis proved more than capable of meeting.

“Unsound” producer Tsu Shan Chambers told Neos Kosmos that Ms Pandelis ticked a number of important boxes when she was chosen for the role after a year of searching for the right person. .

“We searched high and low for deaf actors (for the role), we went interstate and national to find the right person. When we saw her self-test, we just said ‘Wow’.”

“There is an energy about her which she brings to the film. She is very committed and whatever we asked her to do, she did. It is a challenging film and groundbreaking on a number of issues. But it is also uplifting,” said Ms Chambers.

Ms Pandelis said that she was diagnosed for deafness when she was two years old after her mother, Fifi, discovered that the toddler did not respond to her calls when she was in another room.

She attended hearing schools. First at Our Lady of the Assumption and then to Star of the Sea in Melbourne.

“I would sit at the front of the class and a visiting teacher, Jan Ferguson, would help me. It was a period of self-discovery for me,” said Ms Pandelis.

In that time she learned Auslan – a sign language developed in Australia.

She also did voice lessons.

“This taught me that posture is important and everything is connected. It gets tiring and I learned to work at a sustainable energy level. It also helps with the different characters I need to play,” she said in a voice that was perfectly modulated in the cafe where I interviewed her.

“I was fascinated by the feeling when I used my voice. When I was young I would walk around and make up my own language,” she said. “The emphasis on words is fascinating, so the way you use words has an effect.”

Music also has an effect on her. Her character, Finn, is a disc jockey playing music in a deaf club.

“It is interesting how we are moved by some songs. Like we feel what they say in the song rather than hear.,” she explains.

Ms Pandelis knew she wanted to act when she was 12 and told her father that she would need to take part in acting classes.

Over the years she appeared in leading roles in Shakespeare productions such as Catherine in the “Taming of the Shrew”, Viola in “Twelfth Night” as well as roles in “Hamlet” and “Midsummer Night’s Dream”. Her favourite play though is Arthur Miller’s”A View from the Bridge”.

She also went to film school studying film and media production. She also did a Stella Adler acting course in Los Angeles.

Ms Pandelis has acted in a number of short films (“Ties that Bind”, “Unforgotten” and music videos. She also produced her own short film, “The Stacks” with her partner Elisha Moore.

A confidence in her skills has helped.

“When I have worked with other actors I have always known that I am capable. I have so much in me that I want to express.”

“Unsound” is her first feature film, and she hopes that it will not be the last.

“‘Unsound’ carries a beautiful message and offers a better understanding of people and the different world they are in. The more you take time to understand someone, the better you can be as a person.”

“Every project I have to be grateful for. I hope there will be another feature film (to come). I like film because I get to play different characters more often. I want to explore that.”

Her father, Paul, and mother, Fifi, have played their role in supporting their daughter’s ambition.

Mr Pandelis came to Australia in 1974 after the Turkish invasion of Cyprus. His family originate from Famagousta. Her mother, who is of Greek and Cypriot descent, was born in Australia.

“I like the culture, even when I don’t get the language, when I am there, I feel I belong.”

♦ For more information about the film and where it is screened, visit the “Unsound” link.