Greek Revolution of 1821 was the foundation of international human rights 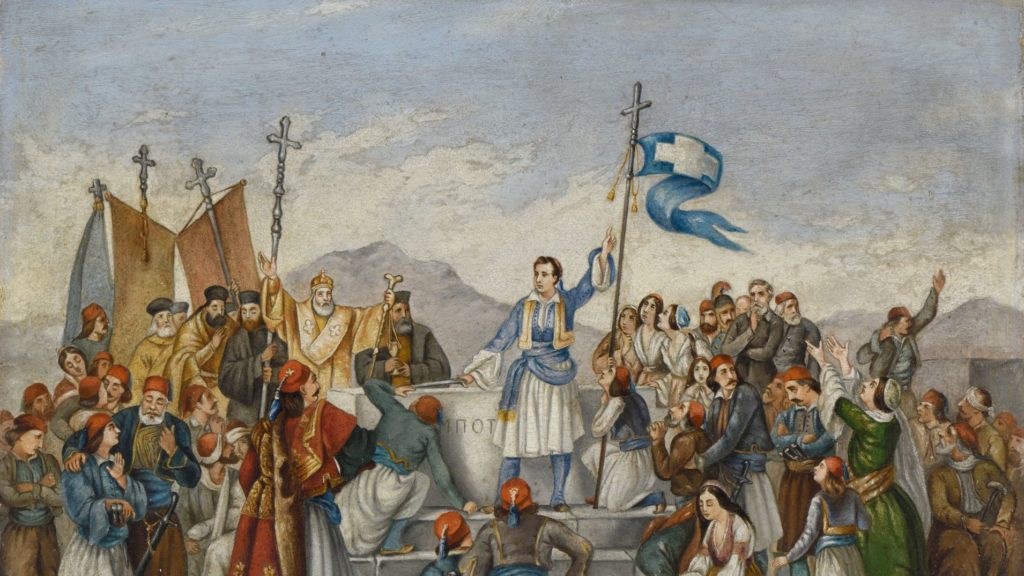 On March 25, 1821 a messy and bloody uprising by Greeks in an inconsequential province of the vast Ottoman colonial empire set the world on fire. Most important for the modern world is that humanitarian intervention based on international law of human rights begins here – the 1821 Greek Revolution.

The calls by citizens of liberal democratic nations for their governments to support foreign causes based on international law of human rights in – Bosnia, Apartheid South Africa, Angola, Republic of Congo, Cambodia, Timor Leste, Myanmar – stem back to the 1821 Greek War of Independence.

Foreigners eager to fight for the freedom of Greeks joined on idealistic grounds, often to be disappointed by the Greeks’ factionalism, guerrilla tactics and at times savagery.

The most famous foreigner was British romantic poet Lord Byron who died from disease, as he prepared to fight in the festering swamps of Missolonghi a town under Turkish siege.

African American James Williams, a sailor from Baltimore joined the Greek revolutionary navy and fought at the war’s defining and bloody naval Battle of Navarino. In turn, John Zachos and Photius Fisk, orphans of the Greek War of Independence became abolitionists in America.

The Greek Revolution inspired the liberal west for many reasons; for radical liberals it was a herald to the Ancient Greek glory, for abolitionists it was an end to slavery and for Christians a rise against Ottoman Muslim control.

READ MORE: Sad end for longest-lived warrior of the Greek War of Independence

It was the first struggle to enlist foreign support from non-Greek philhellenes. And it was the first time a media strategy was developed to sway citizens to support the Greeks in their quest for freedom and independence and put pressure on their governments.

A London Committee of philhellenes was set up to garner support for the Greek cause and began funding drives and concerted media campaigns to engage support for the cause. The Committee included abolitionists, Irish republicans, liberals, radicals, evangelists – a motley crew. The most renowned philhellenes were Lord Byron and philosopher, abolitionist and anti-imperialist, Jeremy Bentham.

Princetown university historian Gary J. Bass writes; “Byron and Bentham, the two most important London Committee members where not just against of the Tory government, but of the British Empire.”

It was difficult for the British to promote freedom from Turkish colonialism and on the other hand sustain the idea of British or European Imperialism. The Greeks gained attention among liberals and radicals for their pagan past, while evangelical Christians and abolitionists supported them as a Christian people fighting Muslim colonialism and slavery.

America’s president James Monroe instituted the Monroe Doctrine as a response to the Greek Revolution. He feared the ire of the Holy Alliance under Metternich and their support for Spanish colonialism in Latin America which the Monroe Doctrine sought to end. America’s political class, while sympathetic to the Greeks given their war of independence against the British, avoided direct involvement in the conflict.

As popular support for the Greek revolutionaries grew in America the hypocrisy of having African slaves was not missed by abolitionists.

The clash between realpolitik and idealism, first played out first in the Greek Revolution of 1821, can be seen now in the distaste for intervention in other nations’ affairs against the moral imperative for supporting international human rights.

The call for China to end their intolerable treatment Uyghurs, or for Myanmar to stop shooting its citizens, draws the ire of China, Russia and other autocracies who condemn the west on grounds of capitalist or white imperialism.

The establishment of international human rights as cause for intervention and war, was sealed by the horrific massacres, mass expulsions, famine and slavery carried out by the Turks in Chios and later their vassals the Egyptians in Morea Peloponnese peninsula in southern Greece

In Chios, the Turks sent a fleet to not only to quell rebels on the Island of Chios and to wipe out the population. While numbers vary, no less than 30,000 civilians were slaughtered, women subjected to mass rapes and 50,000, mainly Greeks carried off to slavery. In Morea Ibrahim Pasha, the Egyptian naval commander, oversaw the mass deportation of Greek slaves, and subjected the population to slaughter, rape and famine.

These events could not be ignored, not even by those with little enthusiasm to be involved in a foreign war. The events culminated in the naval Battle of Navarino in 1827, where a combined naval force made up of Greek, British, Russian and French ships were led by Sir Edward Codrington ended the horror.

England’s Tory Prime Minister George Canning while sympathetic to the Greeks, had then avoided direct conflict with Turkey. Bass highlights Canning’s shock at the cruelty of Ibrahim Pasha’s war on the people of Morea. “It was so ferocious in its detail, so hopeless of termination, that it became an evil of so extraordinary character as to justify extraordinary interposition”

It is difficult after 200 years to understand the impact the Greek Revolution had on the modern world. The Modern Greek state and Orthodox Church’s emphasis on patriotism, nationalism and religion make many progressives nervous, often for good reason. The second reason is because western middle class intellectual guilt, so often reflected in post-colonial studies has limited our capacity to objectively examine the vast colonial enterprises of non-European nations.

READ MORE: The 1821 spirit burns bright in the diaspora: Greek Australians point out how 25 March is still relevant today