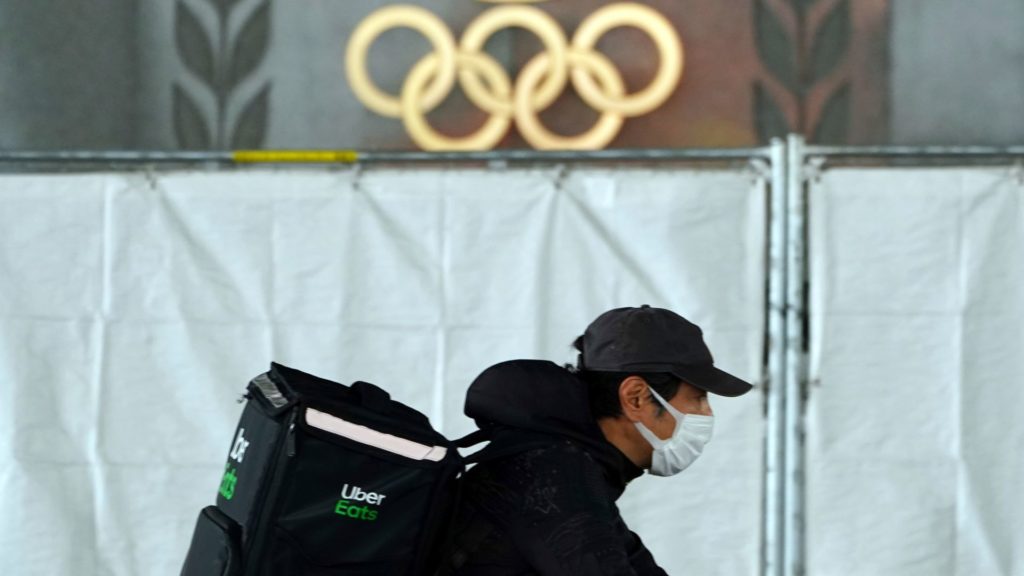 An Uber Eats delivery person carries items near the Japan National Stadium, where opening ceremony and other events are planned for postponed Tokyo 2020 Olympics, with engravings in honor of 1964 Tokyo Olympics seen on the side of the stadium wall behind the fence. Two top officials of Japan’s ruling LDP party on Thursday, 15 April, said radical changes could be coming to the Tokyo Olympics. One went as far to suggest they still could be canceled, and the other that even if they proceed, it might be without any fans. Photo: AAP via AP/Eugene Hoshiko

As a fourth wave of the coronavirus pandemic worsens in Japan, Prime Minister Yoshihide Suga faces a formidable challenge to successfully host the increasingly beleaguered Tokyo Olympic and Paralympic Games, with less than 100 days left to go.

More contagious variants of COVID-19 are spreading from Japan’s second-largest city Osaka. Cases are already rising again in Tokyo, requiring a so-called “quasi state of emergency” to be reimposed in Japan’s major cities.

Anxieties are also rising over the country’s sluggish vaccine rollout, which is far behind many other countries, including Singapore, South Korea and Indonesia. Opinion polls show up to 70% of Japanese feel the vaccine rollout has been too slow.

As the head of one nursing care centre put it,

the government doesn’t seem to understand the urgency of the matter.

Taro Kono, the minister in charge of the rollout, has said 100 million doses should be stockpiled by June to cover the country’s elderly population (36 million people), health care workers and those with pre-existing conditions. This means, however, less than half the population is likely to be vaccinated when the Olympics start on 23 July.

The main cause of the slow rollout stems from the initial decision by the government to go through a delayed approval process for the Pfizer-BioNTech vaccine.

Even though Phase 3 trials were concluded last November and the vaccine was approved by the World Health Organisation on December 31, the Japanese Pharmaceuticals and Medical Devices Agency (PMDA) took another six weeks to conclude its own trials before granting approval. The rollout has been further impeded by strains on Pfizer’s production capacity and export controls imposed by the European Union.

At least four Japanese pharmaceutical companies have been conducting their own vaccine trials, but these have been stymied by a lack of investment and the slow pace of bureaucratic approval by the PMDA.

Though achingly slow to be delivered, this means Japan has secured the rights for 564 million doses — more than enough for its population of 120 million people.

A history of vaccine scares

But vaccine supply isn’t the only issue the country is facing. There are also concerns over the relatively high rate of vaccine reluctance among the Japanese public. Less than 25% strongly agree vaccines are effective, important and safe, according to a survey by The Lancet.

This is the legacy of vaccine safety scares in past decades. A small number of infants died from whooping cough vaccinations in the 1970s, followed by some adverse reactions to a combined measles, mumps and rubella (MMR) vaccine in the 1980s.

Unfounded safety fears even led to the government withdrawing a national vaccination program for the human papillomavirus (HPV) in 2013, with fewer than 1% of Japanese girls now vaccinated for HPV.

Two recent surveys, however, show more than 60% of Japanese people are willing to get a COVID vaccine. The groups with more hesitancy included women and younger generations, with just over half indicating they wanted to get vaccinated.

For over a year, Japan’s pandemic strategy has largely relied on requests for businesses and the public to take voluntary precautions, such as closing bars and restaurants by 8pm, rather than enforce strict lockdowns. The government’s goal was to minimise the impact on the economy.

The Suga government and that of his predecessor, Shinzo Abe, however, have been under constant criticism for what many perceive as a reactive approach to the crisis. There have been a number of missteps along the way, too.

This has worsened the approval ratings for the governing conservative Liberal Democratic Party (LDP), which has to face a national election for the lower house of the Diet (Japan’s parliament) by October. Numerous corruption scandals implicating LDP Diet members, senior bureaucrats and even Suga himself have also undermined public support for the government, which could ultimately threaten Suga’s leadership.

Relations have also worsened between Suga and leaders of Japan’s prefectural governments, especially the governors of Osaka and Tokyo. They have been insisting a “quasi state of emergency” be reimposed for at least a month, following the premature lifting of the previous state of emergency on March 21.

Osaka’s governor has also called off the Olympic torch relay through the streets of his city.

Playbook for a COVID-safe Olympics

The Tokyo Olympics, themselves, however, are still proceeding as planned. The Suga and Tokyo governments and the International Olympic Committee believe there is simply too much at stake in terms of corporate sponsorships, broadcasting rights and political prestige — despite the vast majority of Japanese people believing the games should be cancelled or postponed.

Suga is even expected to invite US President Joe Biden to the Olympics during his official visit to the US this week.

Foreign spectators have now been barred from attending, but organisers are still hopeful to have a domestic audience for the games, particularly since socially-distanced sporting events have resumed in Japan, such as baseball, soccer and sumo wrestling.

However, there is so far no requirement that local spectators be vaccinated. And the IOC is only encouraging — not requiring — that athletes be vaccinated, according to IOC Vice President John Coates.

All athletes, coaches and support staff, as well as the foreign media, will instead have to show negative COVID-19 test results before entering Japan. They will also be required to follow a COVID-safe “Playbook”, which will strictly control their activities during the games and require testing every four days.

How the government handles the games may just determine its fate in the October elections.

Scandals and negative publicity have swirled around the event for months, putting enormous pressure on the government and organisers.

Last week, a report that priority vaccinations were being considered for the Japanese Olympic team ahead of the public sparked a social media backlash and prompted a denial by the government.

With less than 100 days to go until the opening ceremonies, the Suga government needs to take a stronger approach towards the pandemic and dramatically speed up its vaccine rollout. The success of the games — and the survival of Suga’s government — depend on it.

Craig Mark is the Professor, Faculty of International Studies at Kyoritsu Women’s University. This article appeared in The Conversation.