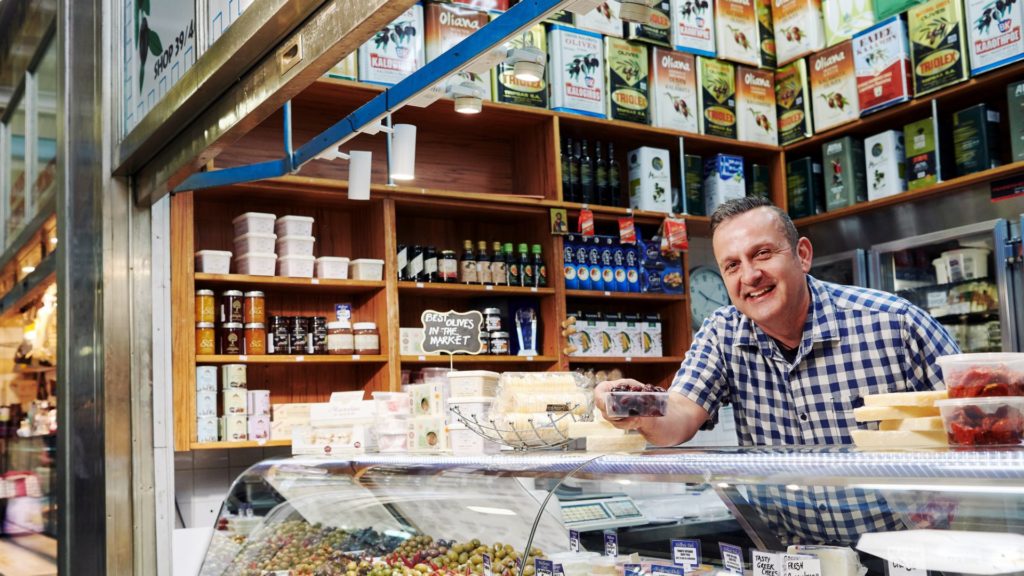 The Hellenic Deli is the warm Greek heart that has been beating in Queen Victoria Market (QVM) since 1972. When John and Helen Xasteroulis opened the deli at Shop 39-40 in QVM’s Dairy Produce Hall, they not only brought the produce of Greece to Melbourne but their shop also became the focal point for Greeks meeting in the centre of Melbourne.

“My father, who is from Lakonia in Sparta and had worked in the olive industry in Greece before coming to Australia, brought his own concept of selling Greek produce like olives, olive oil, mezethes and other products,” said his daughter, Anna Kikidis, who with her husband, John, took over the running of the Hellenic Deli in 2006.

She worked as a child at the deli and remembers when it became a meeting point for Greeks looking for produce from their country of birth and spending some time catching up with other Greeks on a similar mission.

“When my parents established the shop, it was mostly Greek migrants who came as it was one place where they could speak Greek. It was very popular as a meeting place.

“We have always specialised in Greek produce and are the only business in QVM do that which makes us a standout,” Ms Kikidis said. “QVM is central to everywhere and offers a vibe that you will not experience anywhere else .

While the family links with Lakonia are strong, the olives sold come a variety of regions in Greece.

“Our olives are true Kalamata olives which come to Australia in brine and in their own juices. We have been using the same supplier of the last 40 years. We also have olives from other parts of Greece including from Vollos.

“We also hand stuff our olives, take out the pits and put in feta, saganaki cheese, anchovies. We also marinade olives in oregano and garlic and use traditional Greek methods.

But olives are not the only highlights at the deli – including hand-made halva from Pireaus, Greek jams, sweets and nougat. There are chocolates from Greece as well as biscuits and kataif. Then there is also Filo pastry, Greek syrups, mountain teas, spices and vinegars. There are a host of cheeses available from different regions of Greece.

Also popular is a range of “Vegan” parmesan, mozzarella and other savoury cheeses.

“We try to highlight unique products. At the moment people go for our pickled octopus, the Petimezi fruit syrup (made from raisins) that is used as a sweetener in cooking and to flavour cocktails.

Also popular are the Balsamic Pearls, little round balls that burst with flavour and are used in salads. The Prawn Saganaki is popular – prawns marinaded in olive oil, oregano, lemon and Hellenic Deli’s special sauce – which is ready to take home and prepare.

“We offer non-Greek people an idea of Greek cuisine and give them ideas of how to cook the produce that they buy,” said Ms Kikidis.

“Before COVID-19, we would do functions and cater for events but we also learnt to adapt and developed Grazing Boxes which people would order for that flavour of Greece to be delivered to their homes.”

Another popular product on sale for Melburnians are a variety of Greek candles.