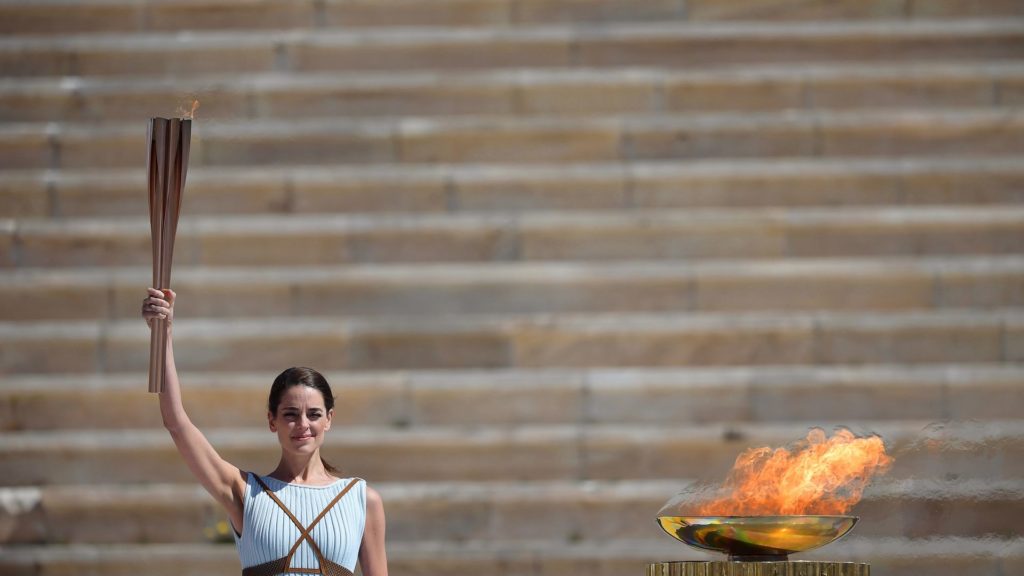 Tokyo 2020 was meant to be the fourth time I attended an Olympic Games. Japan and the Games would have been my chance to see my godson, koumbaro and their family again. A beautiful nation, I fondly remember visiting schools where kids held banners proclaiming, “Welcome Bill & George,” when my koumbaro would take me on some school visits as part of his work. There, some students created human tunnels to welcome us with Aussie and Japanese flags linked together. Sadly, COVID-19 meant the Games were postponed by a year, and like all Aussies, we are not allowed to travel anyway!

The other Games I had attended were the brilliant Sydney Games where my mate Dominic and I ran like geese around Olympic Park after Kostas Kenderis won gold in the 200 metres. I met Kostas, a fellow Lesvian, on a visit to Molyvos in 2002, where we both reminisced his performance and the Games as a whole.
I was also at the amazing London 2012 Games, where I lived at the time.

You see, the more I reminisce, the more I can find Olympic anecdotes, even though I am just a casual patron. Imagine what the Games must mean to athletes, their families, officials, and hardcore aficionados. The Games are special, enabling us to bring representatives of all nations and occupied nations/territories such as Palestine, together, to celebrate and participate in sport.

Held every four years in ancient and modern times, the Olympics have become an unparalleled sports event which transcends time. The Olympic ideals, however, are rooted in Greece, and bearing that in mind, there was a push to hold the Olympic Games in Athens and Greece for evermore. The International Olympic Committee did not favour this proposal.

The 80,000 who attended the inaugural opening and closing ceremonies of the 1896 Games can attest to Athens being a remarkable host – deserving of this honour perhaps more than just once a century. The first venue of the modern Olympics, the Kallimarmaro Panathenaic Stadium at Pangrati, near the Kentro (Athens CBD) is a must for any visitor to Athens. I have run laps around the stadium and I was there with my koumbaro and parea in 2004 to watch the finish of the Marathon when I attended the 2004 Olympics.

In 1906, the Olympic Committee arranged for the Olympic Games to be held in Athens. These were official Olympics at the time and became known as the Intercalated Games or 1906 Olympic Games. Held partly to appease the Greek push to hold the Olympics in Athens on a four-year cycle, or at least to host them more often. These Games became a reality in part due to the massive success of the World’s Fair in Paris overshadowing the 1900 Olympic Games held in France, the home of Pierre de Coubertin, who championed the revival of the Olympic Games.

The “second International Olympic Games in Athens”, according to IOC, were held in 1906 as part of a compromise which would have meant the holding of Olympics every two years: the Olympics (main event currently held on leap years) and the Intercalated version held permanently in Athens every four years.

American journalist, James Sullivan, who attended the Intercalated Olympics, wrote the “Olympic Games of 1906 will go down in athletic history as the most remarkable festival of its kind ever held. They exceeded in every way the successful Olympic Games of 1896… The scenes and incidents and everything in connection with the Olympic Games of 1906 made an impression that will never be forgotten, and it is hoped that future Olympic Games will be up to the standard.”
Unlike most of the first edition of the Olympic Games held elsewhere, the 1906 version was set over a short, tight timeframe between 22 April and 2 May, and was, by all accounts, very well organised.

There were 854 athletes representing 20 participating nations, including Australia, who like the Greeks, have attended every official modern Olympics.
What was also exciting is that Thessaloniki and Smyrna, both Greek cities that were occupied by Ottoman Turkey, were allowed to participate in the football competition. By 1912, Thessaloniki would become part of Greece following the first Balkan War, while seven years later, Smyrna likewise following the end of WW1. Tragically, by 1922-23, the entire Greek, Armenian, Assyrian, Jewish, Levantine Rum (Antiochian Greeks) and Kurdish population would be wiped out by the Ottomans, as they tragically retook the city from Greece.

But in 1906, there was a spirit of friendship as the Olympics were held at the Kallimarmaro Stadium, the only international stadium made entirely of marble. The Stadium was the site of an ancient racecourse, and then a 50,000-capacity stadium, functioning until the end of paganism. For several centuries, the stadium served as the venue of special games celebrating Athena, held every four years.

Modern Olympic Games prior to 1896

The modern stadium was excavated and made ready by 1869 in order to host the ‘Olympics’ which preceded the 1896 Olympics. That’s right, there were Olympics held before the 1896 Olympic Games, mainly for Greek athletes and artists from Greece, the Ottoman Empire and Crete in 1859, 1870, 1875 and 1889. Few foreigners were allowed to participate in the 1889 event, which was organised by Konstantinos Fokianos and funded by Konstantinos and Evangelos Zappas, wealthy Greek cousins who were born in what is now Albania and residents of Romania.

I digress somewhat, but it is noteworthy that the Olympics didn’t just start in 1896. Nor did they not return to Greece between1896 and 2004. In 1906, Greece had a great showing, taking home eight gold and 34 medals, to finish behind champions France, followed by the USA. Australia had a small contingent and travelled far to attend, finishing a gallant 19th.

The next edition of the Intercalated Games was planned for Athens in 1910. However, it was scrapped due to political tensions in Europe, yet the 1912 Olympiad was held in Sweden! Was there a jealous or fear factor that the Greeks would once again pull off an amazing Games? It’s possible.

Some time or years later, the IOC had a negative change of heart with their previous recognition of 1906, as well as discontinuing the Intercalated Games. One reason was not to take away from the original ethos of Games being held every four years. Yet, we now have the Winter Games instead! Surely, Athens deserves to be celebrated, for the medal winners and records are unfortunately no longer recognised.

The efforts that year, however deserve a place in the official Olympic Games history.

There is no doubt that Olympics are special. When you see Korea, occasionally, marching as one, or the moving moment when Muhammad Ali lit the Olympic Cauldron in Atlanta, you can see the upside of the formidable event. Not to mention how it can transform a city or place an emphasis on social issues like the environment. Of course, the centrepiece are the historic sports moments by greats such as swimmer Eric the Eel, skier Eddie the Eagle skiing, gymnast Nadia Comaneci, sprinter Cathy Freeman, a Jamaican Bobsleigh team, or the heartbreak of British sprinter Derek Redmond, and you have incredible moments.

This year, my koumbaro and his family will be in the host city of the Games. It will be perfectly organised. Just like 1906 was. Interestingly, Tokyo 2021 will not be syncing with the four-year intervals of the Games. Yet the IOC has sanctioned and recognised Tokyo 2021. The IOC had once sanctioned Athens 1906. It’s time to recognise these Olympics as official Olympic Games as is only fair.

What you can do to ensure 1906 is recognised in Olympic history: Share this article, write to the IOC, talk to fellow patriots and Olympic lovers, make your local mainstream media aware of 1906. Write to IOC
Write to your own national Olympic Committee in  Australia at aoc@olympics.com.au

Billy Cotsis is the author of 1453: Constantinople & the Immortal Rulers, out now