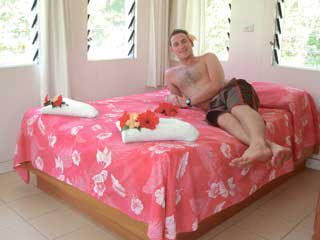 A happy ‘flashpacker’ on Nacula Island in Fiji. Photo: Supplied

PERHAPS one of the greatest trends of the last 20 years has been the rise of backpacking as a legitimate form of travel. Certainly in Australia it is now regarded as an important sub segment of the growing independent traveller market with over 566,000 international backpackers arriving in the country in 2007.

But if you are thinking backpacking just means sharing dorms with eight other travellers and being woken by young Germans and Japanese rummaging through plastic bags, packing to catch the 6am train to Rome, think again. All of a sudden, backpacking has grown up and its older more sophisticated cousin has arrived on the scene: ‘the flashpacker.’

Flashpackers are basically travellers who are just a bit older, typically between 28 and 45 years old, university educated, have worked in a professional career and are taking a short or extended break from life at home. Often they are on a career break for “six or 12 months and can often be found travelling on round-the-world air tickets.

Because they are older, more sophisticated and have some money behind them, they are demanding higher and higher standards of accommodation and meals from the industry. Importantly however, they still want to travel with all the freedom and flexibility of the backpackers. Essentially they still want to find the same authentic experiences and have the same social interactions that the backpackers do, however they want (need) a little more luxury.

But why go to a five star hotel when no one will talk to you? For flashpackers, dorm accommodation has been replaced by individual cabins or rooms with ensuites, the $5 spaghetti meal has been replaced by a $25 fish steak, the 1978 Ford Falcon wagon by a new rental car and the cask wine by a nice bottle of red from the Yarra Valley.

Hence the flashpacker resort has arrived, and its spreading like wildfire from Berlin to Vienna to Cape Tribulation in Queensland. However one of the best places to experience these is on our doorstep in Fiji’s Yasawa islands.

The Yasawas are four hours by boat from Nadi (the airport for Fiji) and until recently had been locked away from international visitors unless you had the cash to splurge on the seaplane to the exclusive Turtle Island Resort. Now however thanks to a regular ferry service called the ‘Yasawa Flyer’ from Port Denarau in Nadi, they are open to all, and especially popular with flashpackers from Europe and America.

So if you are interested in million dollar views for $100, authentic unpackaged experiences and chatting to an international mix of interesting travellers as the sun sets, go and find yourself a hammock on Oarsman’s Bay on Nacula Island in the Yasawas.

Maybe a six month ‘career break’ travelling the world is not such a bad idea? Oh, and I didn’t even mention that your stay there is extremely beneficial for the local people as they own the resort, so the profits go to the local village!