The Good, the Bad & the Ugly 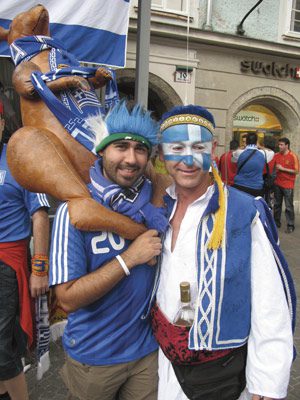 Greek fans all the way.

THE GOOD
It is always satisfying seeing the Greek Olympic team coming out first at any Olympic games. Following the glorious Athens 2004, it was always going to be difficult for the 2008 athletes to follow in the golden footsteps of the 2004.

Thankfully, the Paralympics athletes did not disappoint, with an impressive, and record, haul of medals. Credit also goes to Olympiakos and Cypriot side Anorthosis who put in respectable performances in Europe.

But the pick of the bunch was Panathinaikos, who thanks to a glorious away win to Inter Milan topped their Champions League groupand progressed to the final 32 teams.

THE BAD
The bigger you are, the harder you fall. So they say, anyway. So naturally anything other than another trophy from the Greek national side at the European Championships of 2008 was always going to be a let down for the fans and the players themselves.

Poor player management from Otto Rehaggle, the same old faces and tired legs and a lack of ambition was Greece’s downfall. At least the fans had fun….

We here at NKEE have also lost count of the managerial changes in the Greek Super League. But there can only be one official Flop Of The Year. Congratulations (or commiserations) to Giorgios Donis. He came to AEK with so much hope and many promises but ultimately he delivered nothing. The losses of the talismanic Nikos Liberopoulos (who incidentally is having a great season in Germany) and ex-captain Trainos Dellas (who went on to lead the Anorthosis European charge) didn’t help. But neither did Donis’ own stubbornness.

THE UGLY
Drugs, cops and capsicum spray. There were a few other nominations but Greek athletes were disgraced by drug scandal after drug scandal. Some suggested a massive conspiracy, others said the athletes and their coaches just got sloppy. The end result was a massive loss of face in the international athletic community. The scandal would go on to ensnare 15 athletes in total, from the sports of swimming as well as track and field, including the Olympic champion Fani Halkia in August.

Finally a mention goes out to certain overly belligerent members of Victoria’s police force who certainly know how to ruin a good day out. Greek-Australian and Cypriot-Australian tennis fans have been applauded for their colour and dynamic fanaticism at Australia’s premier tennis events such as the Australian Open. Police allegedly responding to complaints from “rude” chanting by Greek fans took it upon themselves to discharge capsicum spray over an entire section of fans. Talk about an over-reaction…