A Socratic attempt to redefine Woyzeck 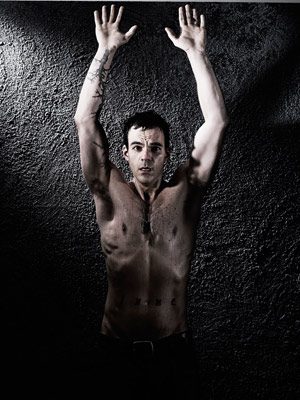 Socratis Otto as Woyzeck possibly one of the most difficult roles yet.

Socratis Otto stars in the contemporary adaptation of Buchner’s theatrical masterpiece, Woyzeck, a work renowned for its timeless exploration of sexual jealousy, paranoia and oppression. Fotis Kapetopoulos speaks to Otto about why Woyzeck matters, the challenges it poses for an actor and his burgeoning career as an actor.

Before Kafka, before Brecht and before Ziogas there was Georg Buchner. His unfinished work Woyzeck is being recreated by Michael Kantor for Malthouse Theatre and the overwhelmingly handsome and fit Sydney-born 34 year old Greek Australian Socratis Otto is playing Woyzeck.

Woyzeck murders his lover after he catches her cheating on him and is then beheaded by the state. He is a working class man, cannon fodder for his military chiefs and he has delusions of Apocalypse. He loves his child and his wife Marie; he is a believer in a godless world, surrounded by religious hypocrites. The Malthouse’s Artictic Director Michael Kantor is breathing new life into one of the most intriguing and amorphous plays ever written. Woyzeck is a signpost delineating the old world of literature and contemporary theatre. Buchner died in wretched anonymity and never saw Woyzeck nor his other two theatrical works performed on stage.

Socratis Otto is conscious of the interpretations that Buchner’s Woyzeck can inspire and the complex meanings that test the actor.

“There are so many different adaptations, the fact is that it was never completed and the range of versions that exist means that this is open to many meanings. There is opera, there is theatre, I remember reading it at university and the adaptation is totally different say from when Tom Waits and Robert Wilson did it as to how Michael Kantor is doing it now.”

Complex outsiders are not new to Socrtatis Otto, “I have worked on Peribanez which expresses deep notions of self, or the individual, in this case a down-trodden peasant oppressed by the state and church. Then there was the Three Furies about Francis Bacon at the Sydney Festival, again about a man outside the mainstream of bourgeois acceptability”

One senses foreboding mixed with anticipation when talking to Socratis Otto, “Woyzeck was one of the first modern plays that focused on paranoia, it was the first one to talk about logic, science and nature and various impacts on the mind.”

Attempting to second guess what the writer wanted is a monstrous endeavour, “You never get sense of what Buchner wanted and our job as theatre makers is to make it matter, and it’s hard to do that when there is no sense of what he, the author wanted”

There is a cast of six and there are three live musicians interpreting the lyrics of Nick Cave and the music of Dirty Three violinist Warren Ellis. Tim Rogers (ex You Am I) leads a band of musicians on the Merilyn stage while the impact of war’s brutal requirements are laid bare and audiences become witness to the dehumanisation of man.

Socratis Otto emphasises, “We are creating a whole world and the music and the actors, along with the direction very operatic. It has all the elements of an operatic tale, it is entertaining yet there is a always that tragic reality about what happens to Woyzeck.”

A question arises about Australian theatre’s Anglocentricity – something that no longer exists in New York, “Sure, have to adapt and create Anglo versions of myself, to be more palatable. Theatre here in Australia is too Anglo. It is still primarily headed by Anglos, but there are many new exceptions, there are more Indigenous, Asian, Middle Eastern and other actors coming up, but it is still too Anglo. It can get thin out there when you’re mining all the time for work, especially in television and cinema. But I will continue to represent myself.”

The issue of America, or Europe, arises where a name like Socratis and his Greek background can be an advantage, “I want to stay here,” he says, “to continue in Australia to create a good catalogue.”

A catalogue is something that Socratis Otto has no reason to concern himself, he has worked with Company B Belvoir on Peribanez, A Midsummer Night’s Dream and Macbeth and for the Sydney Theatre Company in Saturn’s Return, Morph, Salt and Fireface. On television he has worked in False Witness, The Last Confession of Alexander Pearce, The Pacific, City Homicide, All Saints, Young Lions, and Outriders and for film he has been in Free Style, Wolverine, Beautiful, Monkey Puzzle, ‘M’ Macbeth, The Rage in Placid Lake and Matrix Reloaded.

Otto is also a NIDA graduate, one of the blessed, “That thinking underestimates the institution, maybe there is a complacency about coming out of NIDA and playing on the fact that you come from there, but it was not that for me! I was training and I did a degree before entering NIDA. I work hard on my craft.” In Woyzeck Socratis Otto will dig into his own background and cultural psyche to find more about the character he will play, “As a Greek-Australian there is empathy, Buchner is a European writer, Woyzeck is a European character, and he is oppressed he is a member of a minority, I am also part of a minority, and in the past as my parents will say things were very difficult in Australia for us. I could allowed myself to be excluded in a world full of Anglos in my year at NIDA. I have worked hard to get past all that.”