Twist of luck for university applicants 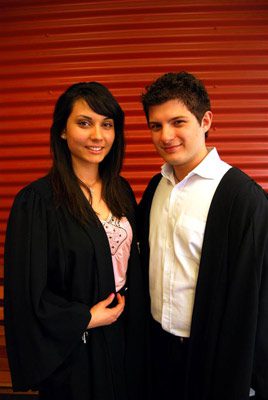 THE release of university offer results can make or break a student’s dreams. When 2008 Alphington Grammar Captain Elizabeth Voulgaris could not locate her name in the first round tertiary offer section of the Herald Sun last Monday, she began to panic.

“I started thinking I didn’t get an offer and thought, what am I going to do? But when I went onto the VTAC website I found that I had an offer from Latrobe university into a science course (my second preference),” she tells Neos Kosmos English Edition.

“I didn’t expect to get in because the entry score was 99.4 and my ENTER score was 98 so I was extremely pleased,” he says.

Clonis believes that the increase in government-funded places following the abolishment of full-fee places for Australian students will generate greater access to tertiary study.

“I knew a guy that got a much lower score than the ENTER required for a course but paid his way through it. But now with more Commonwealth supported places, this means that one guy who missed out by .5 of a mark would not miss out because he couldn’t afford to pay”.

Voulgaris is more critical of the VTAC system. “I actually don’t like the way we are marked at all. I understand that there are brighter students but at the same time I don’t think that it’s fair as a lot of students who are average get marked down (for not choosing the subjects which are marked up), lowering their ENTER scores”.

For those who missed out on a first round offer last week, there is still a chance to receive a second round offer (published in the Herald Sun on February 6) or a third round offer.

Bill Lihoudis, missed out on his first preference but was still pleased with acceptance into his second preference – Finance at Latrobe University.

“These days you can transfer courses after first year or even transfer from TAFE so there are a lot more options,” he says.