Independent Senator Nick Xenophon shares the balance of power in Canberra and now big decisions are being made. DINA GEROLYMOU looks for the man behind the public facade of stunt driven single issue political trader. 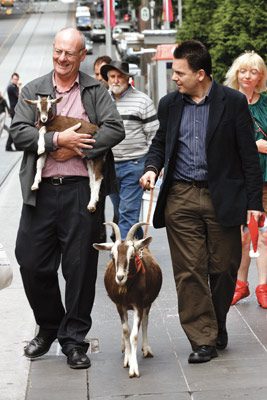 IN THE sweltering heat of Adelaide’s first day of the worst heat wave the state has seen in a century, the office of independent senator Nick Xenophon. He comes down the stairs almost hopping and immediately starts talking in Greek apologising about the temperature in his office “the air-condition is not working properly… how do you say air-condition in Greek?” he asks in a way that made me think whether we’d met before. He repeats the word “klimatistiko” a couple of times and in between he tells me in a self-deprecating way “I have to practice my Greek… I know”. I tell him his Greek is ok – certainly better than I thought – but his accent needs work. ” Ah… my accent! I know, I know. I’ll tell you a funny story about it later if we have time” he says.

It’s easy to like Nick Xenophon, Independent Senator for South Australia. He is personable, witty, has a quirky sense of humour (“my Greek is broken like the eggs in the galaktoboureko”), talks and laughs whole-heartedly without worrying whether you’ll take him seriously and he is passionate about his work. Getting to know what he truly believes in is a different matter. He seems to keep his cards close to his chest and doesn’t give away too much on issues that he hasn’t examined in their full breadth and depth.

Yet he’s willing to explore them with you and immediately gives the impression that he enjoys intellectual debate. He has the reputation for being a workaholic and certainly seems capable of being in many places at once.

Xenophon was elected to the SA parliament on a single issue, opposing pokies and he says with disarming frankness and maybe half-jokingly “it surprised me too”. He was first elected to the SA Legislative Council in 1997 and after 10 years in office he quit to enter federal politics to further pursue the “no pokies” issue. Anyone else would have announced his decision by calling a press conference in his office or some other similar venue but not Nick Xenophon. He went to the zoo. The giraffe enclosure seemed perfect for him since he wanted everyone to know that he is “sticking his neck out”.

It wasn’t the first time he used unconventional methods to attract attention. In fact, he is well known for his stunts using a number of animals to draw attention to his causes and issues of importance to him. Along the years a goat, a cow, a dog and a mule became his companions for a while when the media’s attention was needed to get his message across.

He’s got a soft spot for domestic animals – except for cats “I think I am allergic to cats, they make me sneeze” – and didn’t hesitate to take the mule out for a walk down Adelaide’s central shopping strip to show his stubbornness. Other times he switched to toys to demonstrate his point: he fell off the toy train, “the gravy train”, when he protested against politicians’ perks and drove a toy car when the luxury cars’ tax was debated. ” I drive a small car and I fly economy although I can fly business class – I don’t mind, I am not that big, after all I can fit in the economy seats” he says.

Xenophon knows how to draw attention and he’s not shy about it either. He is fully aware that he needs the media to get heard on issues that few other politicians talk about although after his election to the federal senate when he talks the media – among others – listen carefully: the government needs his vote on every piece of legislation it wants to pass. Similarly the coalition can block legislation with his vote.

The lack of a party machine with its huge marketing resources is not a deterrent for Xenophon. He believes in the power of the individual and seems to thrive on being a lone crusader. He doesn’t mind if neither side of politics like him and he proudly declares it to be his badge of honour. Unapologetic about changing his mind on Fuelwatch and embarrassing SA politicians when they voted to give themselves the opportunity to buy cheap cars, he doesn’t like making rushed decisions. He’s been criticised for procrastinating on legislation and for indecisiveness but he prefers to adhere to democratic processes although he is fully aware that democracy is not always time-effective: it requires a lot of time to think, consult and debate. Xenophon is the first independent in the senate since Tasmanian Brian Harradine who used his position – he held the balance of power – to benefit his state. Xenophon admires Harradine and wants to emulate him to serve SA’s interests.

Xenophon is not easily convinced on issues he is called to vote on. Wielding power in the senate weighs heavily upon his shoulders and he says he is determined to use his position responsibly by examining each case on its merits. He gives the example of Fuelwatch which “I brought down because it wasn’t fair”.

He chooses his words carefully when he is asked to comment on issues he hasn’t examined fully – the latest being the charter of human rights. “I need to look what the government is proposing, what the impact of that would be. I am cautious on the issue. It’s one thing to have a set of words that are novel but unless it’s followed up in practical terms… I am just concerned. I am not against the idea but I am yet to be convinced”.

He doesn’t disagree in protecting human rights but he questions whether a charter of human rights will improve the plight of indigenous Australians. “There is no point having a set of words just to feel good about ourselves”.

He mentions his recent visit to three Aboriginal communities to the Northern Territory and expresses concern on what he saw there in terms of school attendance and health while he adds quickly “a charter of human rights won’t fix that”.

One issue he doesn’t need to think about is Australia becoming a republic: “Of course I think that Australia should be a republic. I think it’s embarrassing that we are not”.

There is never enough time when Greeks converse and so the interview with senator Nick Xenophon was cut short by his next appointment. Time didn’t allow us to discuss how to improve his Greek. Pity. I was looking forward hearing the funny story about his Greek accent…