Greeks roll up their sleeves 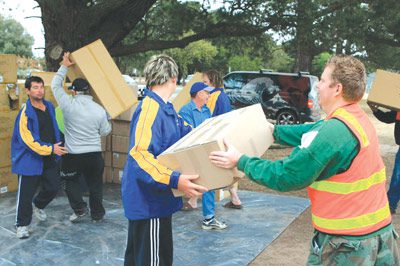 THE work of volunteers is invaluable in making life bearable for the survivors of the Victorian bush fires. “If anything good’s come out of this, it’s that real human spirit rallying together to help people. It’s really overwhelming.” says Councillor for Whittlesea Kris Pavlidis.

St Kilda State Emergency Service (SES) controller Jim Kokkalos, 45, is one of the Greek-Australians at the forefront preparing the foundations for the recovery phase.

He talks about a young child of about five wearing borrowed clothes. “I gave him one of the trauma teddies that we hold and he just grabbed it and hung on to it so tightly.”

He added, “The borrowed clothes that he was wearing were hanging off him, so it was the only thing that he could call his own. It was quite moving to see a child like that.”

Mr Kokkalos’ primary job is to search properties for remains of a house, recording its location on his GPS so that people are able to relocate if they choose to rebuild.

“The landscape (between Whittlesea and Kinglake) was unrecognisable and although the GPS indicated that there should have been a property there, the house was flat to the ground.

“You could see personal effects such as cups and saucers that were totally destroyed, and if you were unlucky you would come across a deceased.” Kokkalos and his team were also responsible for identifying potential hazards such as potentially diseased carcasses of animals and burnt out cars “which were a concern because someone might still be in there”.

Back behind the scenes in the control unit he describes as a “war room from World War II” is Michael Alexis, 49, whose role as a SES controller is to co-ordinate the people like Kokkalos that are out on the field. “We have been working alongside the police and CFA, to undertake jobs such as assist the CFA to cut down trees or assist the police with search and rescue,” he says.

“I think what’s really come through for me is how amazing these volunteers have been-most of us have full time jobs yet people that have done 12 hour shifts are still just throwing themselves at us”. Councillor for Whittlesea, Kris Pavlidis, who has been acting as a reference point between the centre and the community at the Whittlesea emergency relief centre could not agree more.

“We have had so many people, including the Greek community donate and fund-raise, the local Greek Community of Whittlesea donated truckloads of food and linen, as did the Greek Orthodox Community Lalor women’s group,” she says.

George and Toula Pezearos from Degani Bakery Cafe directly assisted the volunteers and victims, sending their staff with food and refreshments to the relief centre every day. Even at an individual level, people such as Red Cross volunteer, Kimbroula have made a difference, working behind the scenes to sort through the mountains of goods that have been donated from the streams of cars coming in. “The Sri Lanka community wanted to come down and cook for everyone. But we can’t have everyone come down or it would be chaos. What we (the council) are trying to do is to get a level of co-ordination,” says Pavlidis.

This has included responding to victim requests such as shovels to dig up the remains of their houses, and co-ordinating with NOVA to bring in a large screen TV aimed to make their lives as comfortable as possible. Nevertheless, achieving normality for these people is still a glance in the distance.

“We keep saying we’ve seen the worst but we haven’t. We are still in emergency mode because fires are still burning and we are still trying to work out how many people are dead. I think it’s going to take months”.

So what can you as an individual or business do? President of the Hellenic Relief Fund (organised by SAE), Mihalis Christodoulou hopes that all Hellenic organisations across Australia will donate their money for one particular project, as was done with the bush fires in Greece two years ago.

“We are asking organisations from the Greek community to meet at the Cyprus Community of NSW Club this Wednesday at 7pm and from there we will decide how we are going to go about the campaign, whether it be a radio marathon, a concert and so on. We’ll see how we go”.