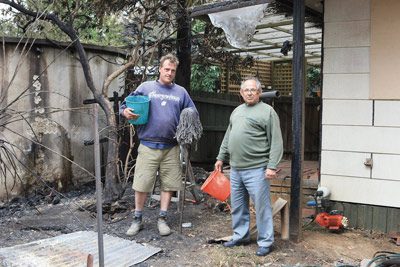 Words are often unable to describe the aftermath of a natural or man made disaster. This is how I felt as I was shuttled last Wednesday, courtesy of the Victorian Police Media Unit into the world of ash created by the horrific fires at Kinglake.

I repeatedly found myself lost for words as I jotted notes whilst travelling on the main road connecting the city of Whittlesea to the towns of West Kinglake and Kinglake.

It is a distance of a few kilometres climbing the mountain through what once was glorious and green Australian bush. This vast natural expanse has been turned into ashes that were still smouldering as we were approaching the Kinglake community.

This depressing view became even more acute as one’s sense of smell was over-powered by the charred remains. It is a view that resembles the visual effects of a Hollywood disaster movie. Terminator II came to mind when the police officer escorting our group showed us a piece of metal from a car chassis that had molten from the heat of the blaze. It was a stark reminder of the extreme temperatures generated by this inferno. Along with the burnt remains of cars strewn on the road we struggled to imagine the unspeakable horror felt by people who were trying to flee the inferno. One can not fathom the level of this fire storm as the scenes and the accounts of survival and destruction alike unfold before us.

It is the CFA station that we pass where people from the area sheltered and escaped the fire, or a stadium with its oval that remains untouched in the midsts of a scorched landscape which harboured a dozen residents/survivors.

On the approach to Kinglake we’re shown a house which survived the inferno with an Australian flag still flying. We are astounded when we are told the owner of the house used Pepsi Max cans and bottles to save his property from the surrounding flames.

We are informed that the embers were travelling about 20 to 30 km ahead of the fire. This explains the speed with which the fire spread, taking everyone by surprise. This is borne out by a story shared with me by a CFA volunteer about the tragic death of a couple.

“I knew the man who was a scientist who studied the patterns of fire behaviours as a hobby; If I told you that this man and his wife did not even make it to their driveway what would you think?”

When we actually arrived in Kinglake we were able to put a face to the drama. You could see the anguish, the emotional and physical exhaustion, the shock and disbelief. The people’s blackened faces and hands were a testament to their ordeal.

When we arrived at Kinglake local residents were amassing for the daily council meeting. There was commotion with numerous police and fire fighting personnel milling around as well as technical crews and other government agencies trying to provide relief to residents. There was also a show of force from volunteers who poured into Kinglake facilitating the distribution of aid. I spoke to Steve a young volunteer with the Church of Scientology. He came from Perth to help as he once lived in this picturesque town. He was distraught by the magnitude of destruction, as I was overwhelmed, after walking around the main street of Kinglake.

The sights of real obliteration blended with the surreal view of buildings that were ‘licked’ by fire only to escape almost unscathed. I cannot forget the gas station that was blown up in smithereens next to the police station that was still standing strong. Another reminder of the velocity of this fire ball that engulfed Kinglake was the building of the State Emergency Service. It was burnt to the ground along with two cars in the garage that their trained volunteer personnel did not even have enough time to move to safety.

One of the most surreal spectacles that I experienced relates to the house of Greek Australian Angie Biros and her partner Michael Rogers. It was off the main street on a side road not far from the centre of town.

All the neighbouring houses, both left to right, had been reduced to rubble. Michael explains to me how he saved his house with a “mop and two 89 cent buckets from Bunnings without handles.” He insisted that it wasn’t luck but sheer tenacity and rage which saw him fight the fire for six hours. “It was pretty intense, a few times I was so tired that I stopped went out the front and laid on the nature strip because that had al-ready been burnt. I kept getting back up and getting back in,” said Michael.

On the pressing question why he didn’t choose to leave, he was adamant: “Well I had no choice. This was forced upon me and the second thing that kept me going was anger. A lot of people who jumped on their cars {to flee] ended up dead… I’ll tell you something if you can’t see the dog or cat at your feet how the hell are you supposed to drive a car.”

Whatever it was that saved the house of Angie and Michael, their house was the final symbol of hope and optimism that I witnessed as we departed in the Police bus. The bus travelling through the landscape of death and destruction was a timely reminder of the power of nature.