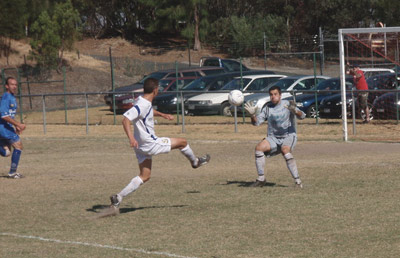 SOUTH Melbourne will face traditional Greek rivals Heidelberg in the final of the Hellenic Cup at Northcote City on Saturday February 21st after a drama-filled 3-2 victory over Oakleigh Cannons.

Vaughan Coveny was on hand to score two goals, including a classy chip in the first half as 1000 Hellas fans saw South march into the final of the Hellenic Cup.

Brazilian ex-patriot Fernando De Moraes opened the scoring with a cracking drive for South Melbourne after good team work opened up the Oakleigh defence effortlessly. Nathan Caldwell, was the supplier, providing the through ball for De Moraes.

The South defence was barely troubled with new signing Stiven Mrkela along with Steven O’Dor marshalling the defensive troops and controlling the tempo. Excellent team work saw South’s defence linking up smoothly with the midfield despite the uneven surface.

The game threatened to boil over after a reckless, unsportsmanlike and unnecessary tackle on Caldwell by Oakleigh’s Robbie Wynne resulted in the South youngster being substituted.

As Caldwell guarded the ball which was rolling innocuously out of play, Wynne flew in with a disgusting studs-up challenge aimed at the player rather than the ball. It is expected Caldwell will miss up to eight weeks of football and possibly more.

Oakleigh were punished a second time as Ramazan Tavsancioglou played a glorious through ball to recent signing Coveny who unleashed a delightful chip to put Hellas 2-0 up.

But Oakleigh fought-back thanks to catastrophic defending by Shane Nunez who got Oakleigh on the score sheet with an own goal. Minutes later, the South Eastern club equalized with one of their only attacks of the game.

Despite conceding the two goals, South keeper Tommi Tomich was kept on his toes in then final stages of the match as Oakleigh also looked for the winner. One save the youngster made, was simply world class with a seemingly impossible reflex save that saved the tie for South.

It was not to be for Oakleigh, with ex-South Melbourne coach John Anastasiadis at the helm as Coveny scored the decisive goal with seconds remaining in injury time.

Coveny blasted into the bottom left hand corner beyond the despairing reach of the Cannons custodian to give South Melbourne a deserved 3-2 victory and a place in the final of the Hellenic Cup.