At the forefront of early warning systems 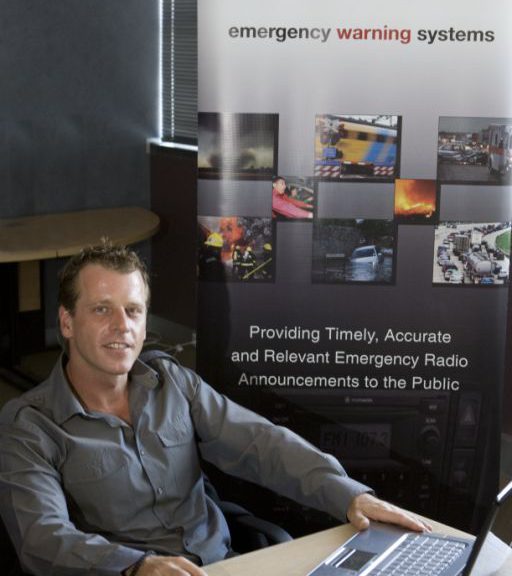 A company founded and headed by Greek Australian, Kon Papafotiou, is in the forefront of developing technology that would provide early warning systems in case of catastrophic events such as the recent bushfires. Kon Papafotiou director of Emergency Warning Systems (EWS) and his partner Domenic Luppino explained to Neos Kosmos English Edition (NKEE) how their system called Global Frequency Warning (GFW) works. “The GFW is a short-range broadcasting system, designed to over-broadcast on commercial radio frequencies to provide the public with a warning message about a particular danger, hazard, or emergency. It is a radio transmitter that can be fitted to emergency vehicles or installed on fixed enclosures for localised public warnings. When activated, it transmits a pre-recorded message over the commercial radio frequencies in close vicinity of the device.”
In the aftermath of the devastating fires that ravaged through Victoria the existence of early warning systems became a contentious topic as it is believed that if these were in place lives could have been saved. “The key benefit of our system is that it will enable the instantaneous and, if required, the automatic notification of the general public of such an emergency, through fast and effective localised and targeted messaging.
This could provide extraordinary benefits to people who are in areas under immediate threat,” Mr Papafotiou highlighted. This critical information disseminated could include danger zones, weather and wind conditions, areas of evacuation, evacuation procedures, road closures and any other information that is relevant and could translate into life or death decisions. “Basically we’re providing emergency services with their own broadcasting capability,” Mr Luppino noted.
The Federal government is taking steps to implement a national emergency warning system that would locate and inform people in affected areas through fixed landlines and mobile phones. The GFW could compliment this system as it has the advantage of utilising the radio frequencies.
“The more ways and more mediums there are to disseminate emergency information the better it is,” stressed Mr Luppino.
Swedish emergency services have already expressed interest in the system.