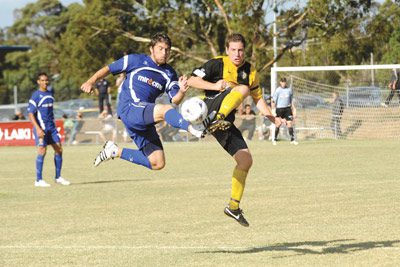 SOUTH Melbourne Hellas completed its 2009 pre-season preparations in the best possible way by defeating Greek rivals Heidelberg United 3-0 in the final of the Hellenic Cup. Alog with the trophy, South also took home the $10,000 prize money on offer to the winner of the Cup on Saturday afternoon which was played before 1500 spectators at the sunbaked home ground of Northcote Iraklis.

In the third vs fourth playoff Lalor Florina enjoyed a wonderful win against the Oakleigh Cannons, defeating the South Eastern club 4-1 on penalties after they were deadlocked at 1-1 after full time.

The organisers of the Hellenic Cup raised over $5000 which will be donated to the victims of Victoria’s 2009 bushfires. The top four clubs also donated $2000 between them. The Nafsika Stamoulis Foundation, along with sponsors the Laiki Bank, Black Swan Dips and Select TV also contributed to the fund raising efforts along with the total prize money for the Champions.

Heidelberg United were no match for South Melbourne in the final as the side from Albert Park dismantled its opponent in what was ultimately a one-sided final.

The Bergers went into the match as reigning Hellenic Cup champions having beaten Lalor Florina 2-1 in the North/West semi final. South had progressed on the back of a thrilling 3-2 win over the Oakleigh Cannons in the South/East semi final, with a Vaughan Coveny goal in the last minute of extra time winning the tie for the lakeside club.

Heidelberg began the match the stronger of the two sides, winning several corners but failing to make any use of their dominance. Despite their slow start, South eventually got into the game and created several opportunities. Gianni De Nittis went close, forcing a good save from Heidelberg’s goalkeeper after a lovely cut-back ball from Goran Zoric who looked lively.

But South were not to be contained after Coveny, who will complete a personal milestone of 100 South Melbourne goals if he can score just three goals in the upcoming season, showed his class before halftime.

The ball fell to his feet at the edge of the area and the big Kiwi hit a lovely shot with his left foot, with the ball flying across the face of the Heidelberg goal and into the bottom corner of the far post. The goal was almost identical to the effort that Coveny scored in the previous week against Oakleigh.

From there, South completely dominated the match and should have been 2-0 up before the break. Zoric and De Nittis failed to capitalise despite their numerical advantage of the Berger’s custodian, and the score remained 1-0 in South’s favour at half time.

South were hungry for more goals and doubled their lead shortly after the re-start. A Bergers foray forward was stopped by South, who quickly surged forward in a counter-attack. An excellent ball played over the Bergers defence found Zoric on the left hand side.

With an acre of space to run into, Zoric charged towards goal, dummied the keeper then passed the ball across to the incoming De Nittis, who had the simple task of tapping the ball into the empty net.

Heidelberg continued to play positive attacking football, and they almost pulled a goal back after Captain Eric Vassiliadis hit the post after linking up with Jim Drossos on the left flank.

South’s keeper may have got the decisive touch after he appeared to tip the ball onto the up right.

Zoric again found himself with a one-on-one with the keeper but his effort was spoiled.

The ball fell to De Moraes who hit a beautiful curling effort which sailed into the top far right corner of the net, leaving the Bergers keeper completely rooted to the spot.

Despite the match being over as a contest, South were keen on keeping a clean sheet. Coach Michael Michalakopoulos substituted Tommich for youngster Andrew Sfetkopoulos, giving the ex-Altona Phoenix player time in between the sticks.

Zoric was named as player of the match, and captain Rama Tavsancioglu spoke of the trophy “hopefully not being the only trophy that we will win this season.” The Hellenic Cup triumph was South’s third, after beating Yarraville Glory 2-0 in 1984 and Oakleigh 4-2 on penalties after a 1-1 draw after extra time in 2007.

Division Three side Lalor Florina were the major talking point ahead of the final after they defeated the Oakleigh Cannons in a penalty shoot-out after the first 90 minutes could not separate the two sides.

The ‘Floriniotes’ equalled their previous major Hellenic Cup achievement in 2002, when they also finished 3rd. Oakleigh have won the Hellenic Cup on four occasions and would have been disappointed to have lost to South Melbourne 3-2 in the semi-final.

A former South Melbourne player Ricky Diaco opened the scoring for the Cannons, after he converted from the penalty spot midway through the first half. The Cannons had the better of the first half, but could not extend on their lead.

Florina came out a different side in the second half and pressured their more fancied opponents who had made numerous changes to their line-up, but failed to trouble the scoreboard attendant.

Another former South player Robbie Wynne missed an absolute sitter to double Oakleigh’s lead. With the keeper on the ground, the unmarked Wynne sent his free header over the cross bar when it was easier to score than miss. Oakleigh were made to rue Wynne’s wastefulness when Florina captialised on a another broken-down Oakleigh attack, scoring an equaliser around the 70th minute, delighting the crowd who were supporting the underdog.

Both team’s agreed to dispense of the extra time and the match was settled on a penalty shoot-out. Both side’s converted their first two shoots, but Florina’s keeper then saved Oakleigh’s next two attempts, drawing rapturous applause from the 1500 strong crowd.

Heidelberg’s first match in the 2009 Victorian Premier League season is away to the Oakleigh Cannons on Friday 27th February, kick-off at 8:30pm. South’s first match is against newly promoted Dandenong Thunder at Bob Jane Stadium on Sunday 1st March, kick-off at 6pm.