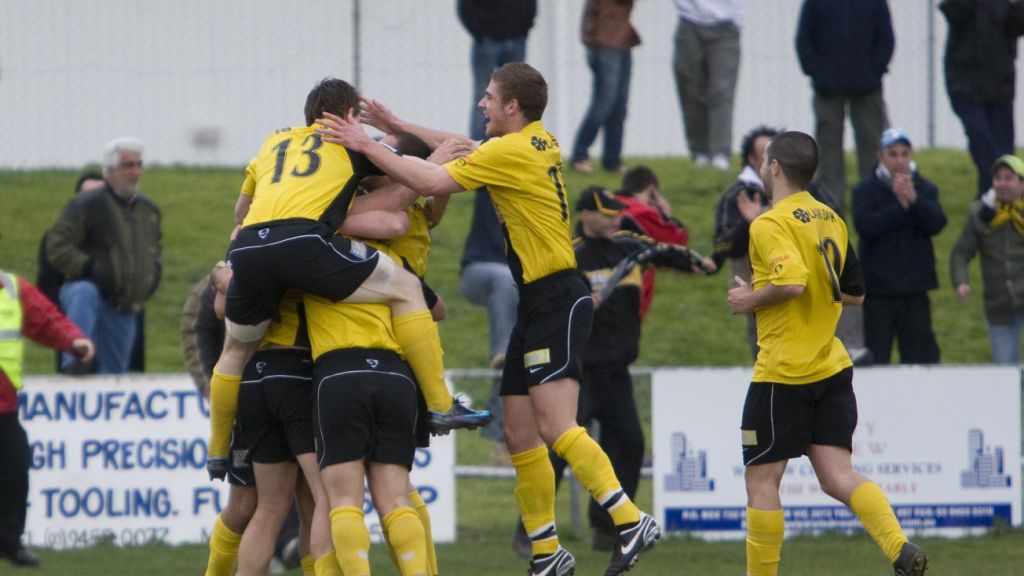 A flawless pre-season has given South Melbourne supreme confidence ahead of the 2009 VPL season. The four-time national Champion has its sights firmly set on more silver wear, and in the club’s 50th Anniversary the fans are also hungry for success.

South conceded just two goals and scored 19 on the way to winning the 2009 Hellenic Cup. They crushed VPL rivals Heidelberg in the final last Saturday at John Cain Reserve and the side will take great confidence with the manner of that win.

With memberships and sponsorship booming at South’s Bob Jane Stadium and exciting plans regarding the stadium’s renovations, there are expectations that Australia’s most successful football club is set for a return to prominence.

South has done well in the pre-season transfer market, strengthening the side with the addition of the big Kiwi Vaughan Coveny and Stiven Mrkela,  premiership winner and former player with Altona Magic.

Coveny is without question the biggest VPL off-season signing. He is a former Hellas legend returning the club where he enjoyed his best years.

Having spent the last four season’s in the A League with Newcastle Jets and Wellington Phoenix, Coveny will be looking towards achieving his milestone of 100 goals for South – he is on 97.

Captain Rama Tavsancioglu spear-heads South’s defence along with Steven O’Dor and the addition of Mrkela will only make it harder for teams to score against them.

Futsalroo and Brazilian ex-pat Fernando De Moraes along with Goran Zoric will give South plenty of potency in the attack and Gianni De Nittis will look to create a solid partnership up front with Coveny.

South Melbourne Hellas are looking to celebrate their 50th Anniversary with a championship and are surely a favourite to finish in the VPL’s top 3.

The Coach: Michael Michalakopoulos. In April 2008 Michalakopoulos took over the head-coach position but was unable to un-do the damage caused in the season’s opening months.

He had previously coached Essendon Royals and 2007 runner-up Whittlesea Zebras in the VPL, and was part of 1991 South Melbourne national title winning squad as a player.

The Key Player: Vaughan Coveney. New Zealand’s all-time highest ever scorer is also a Hellas legend. He is a two time championship winning player with South Melbourne and was also a member of the team that competed at the FIFA World Club Championships in Brazil in 2000.

The Rising Star: Goran Zoric. 2009 marks Zoric’s second year at the club. He was voted Man of the Match in the Hellenic Cup Final and will certainly put many defences under pressure this season. He is quick on the ball, has superb control but needs to convert some of his chances in front and around the goal.

NKEW predicts: South Melbourne will finish in the top three.

Despite failing to make the VPL finals series in 2008, Oakleigh will be buoyed by their heavy recruiting. The Cannons have show little hesitation in splashing out for their targets but the pressure is on the big names to perform.

Coach John Anastasiadis is also  a high profile Oakleigh recruit who will attempt to steer the ship from the side-lines. Anastasiadis is no stranger to success and pressure, having captured the 2006 VPL title at the helm of South Melbourne.

Oakleigh had a narrow loss to South in the semi-final of the Hellenic Cup, having been sunk by a late Vaughan Coveny winner as the Albert Park club triumphed 3-2.

In the third vs. fourth play-off, a youthful looking Oakleigh again tasted defeat, this time at the hands of minnows Lalor Florina who defeated the South Eastern club after a penalty shoot-out.

Oakleigh have secured the signatures of Melbourne Victory Youth pair Stephen Hatzikostas and Robert Wynne who will inject youthful enthusiasm into the squad.

The Coach: John Anastasiadis. Experience is an attribute that Anastasiadis boasts, and the 2006 Championship winning coach knows the competition well. He will need to motivate his squad to go one better than ‘08 and qualify for the finals.

Key Player: Ricky Diaco.
Another South Melbourne recruit, Ricky Diaco, when fit and firing, is as lethal as any striker in the VPL. The proven goal scorer and former A-League striker could prove to be the difference in 2009.

The Rising Star: Stephen Hatzikostas is a VIS graduate and talented futsall player. He once trialed for AEK Athens and enjoyed some good football in the National Youth League this season.

NKEW predicts: Oakleigh Cannons will finish in the top six.

Heidelberg United have enjoyed a relatively solid pre-season in the build-up to the VPL kick off. The Bergers triumphed against solid opposition in the Coffee Club Cup (Brisbane’s Hellenic Cup), defeating Sydney Olympic 2-1 in the final.  Their Victorian Hellenic Cup campaign was also fruitful, as the Bergers made the final after toppling fellow ‘Makedones’ Lalor Florina 2-1 in the semi-final.

Though they were defeated 3-0 in the final by a rampant South Melbourne, all signs indicate that Heidelberg will perform on the park in 2009.

The Warriors will look to banish memories of 2008’s preliminary final loss against the Melbourne Knights, which was all that separated them from a Grand Final appearance. The Bergers have very good depth in their squad. Their talented roster includes FFV Gold Medal winner Graham Hockless, captain Tony Ouliaris, veteran Jim Drossos, Anthony Magnacca and Robert Liparoti.

Jim Drossos told NKEW, “Anything less than the finals is a failure for us. We are hoping to go one better in 2009 and take our place at the final dance.”

The Coach: George Katsakis. Katsakis’ first stint at VPL level was with Kingston City, and despite a premature end to his reign in the South East, he has shown his capabilities at Heidelberg. If Katsakis can fire up his side, they will easily push for a top four finish.

Key Player: Tony Ouliaris.The Berger’s captain is the maestro in the midfield and an all-round player. A talented defensive midfielder, Ouliaris is a tough tackler and consistent distributor of the ball. He wears his heart on his sleeve and is dedicated to Heidelberg

The Rising Star: James Stefanou. Stefanou is a tall and athletic no-nonsence defender. He had a good first season for the Bergers in 2008 and will look to continue his improvement. The ex-South Melbourne players is quick, dedicated and professional.

NKEW predicts: Heidelberg United will finish in the top four.