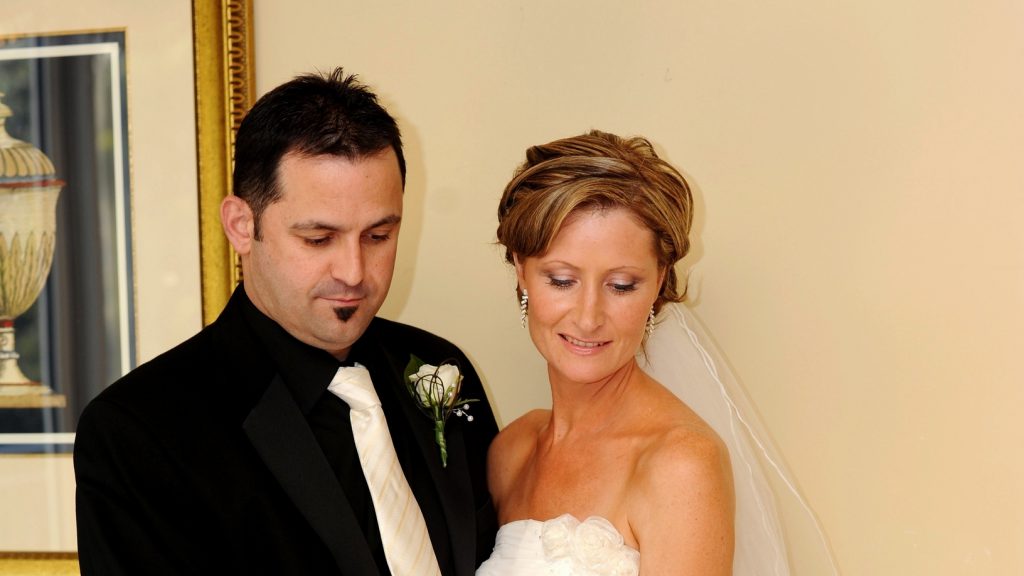 Mandy and Nick Karadimos were married on the 22nd of February. It was the “happily ever” after that Mandy never imagined for her and her two boys Tom, 14, and Bradley, 16.
“I didn’t think I’d get married again but he’s wonderful. He has become a step dad to two teenage boys which is a challenge but he’s doing such a fantastic job”.

How it all began: We met through mutual friends about five years ago- it was his smile and his laugh that caught my attention. We exchanged numbers, went for dinner the next weekend and kept catching up every few days from there-Mandy.

From the first year we knew that we were going to get married but it was a matter of timing. We would always joke about it and propose to each other the whole way through but it took another four years before we got engaged in January 2008.

So there wasn’t actually an official proposal but we picked out the ring together last year-Mandy.

I couldn’t have organised the wedding without my three bridesmaids-they went out of their way to help, when they could, despite one of them being busy working for the CFA following the bushfires, and another being interstate.

Whilst my sons loved getting dressed up and we had a lot of fun, being teenage boys, they weren’t really interested in the planning. I opted for an antique, purple-gold theme through the colour of the bridesmaid’s dresses, to the cake, to the flowers-Mandy.

I had a local dressmaker from Croydon make my dress. It was a two piece, the bodice which was ruched with crystals and little handmade rosettes across the top-Mandy.

My cake was custom -made, with one chocolate layer and one white layer decorated with metalina roses and brown doda vines.

My bouquet was also made up of metalina roses (which are a metallic colour with flecks of gold and mauve through them) with doda vines and a mixture of ivory lisianthus roses.

It was a traditional Greek ceremony at St Andrew’s Church in Forest Hill but the last part of the wedding sermon was in English, which was nice.

Being a photographer, I had been to several Greek weddings so the ceremony wasn’t unusual but it was interesting to be part of it this time and learn the meaning behind it- Mandy.

I waited for almost half an hour at the church, because Mandy was running late, and I started to wonder if she was coming at all! *laughs* -Nick.

The reception was held at Clarions on Cantebury in Forest Hill. It was in the ballroom and we had about 80 guests. We had all the traditional elements of a wedding from cutting the cake, to throwing flowers and, of course, some Greek dancing.

The best thing about it was having all the people I love in the one place- my family had come down from Tassie, and relatives and friends had come from all over Australia (and the world) – Mandy.

We haven’t gone yet because we had a christening the week after the wedding and didn’t want to rush it we but plan to go to New Zealand or Vanuatu.