The return of Sakis Rouvas to the 2009 Eurovision in Moscow has a strong Australian connection. NATALIE LIVADITIS speaks to the two Australian songwriters behind the lyrics to this year’s official Greek entry for Eurovision. 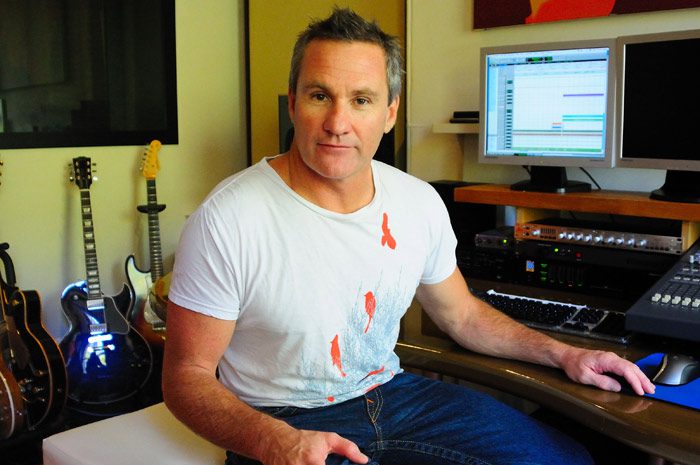 In the studio with Craig Porteils.

King of Greek pop, Sakis Rouvas, is no stranger to the Eurovision spotlight. In 2004, his performance of Shake It wowed international audiences, landing Greece third place in what is Europe’s most popular music contest.

This year he returns yet again to the Eurovision stage in May and it’s partly thanks to two Australian songwriters from Sydney.

Craig Porteils, well known music producer and songwriter in the Australian and US music industries, co-wrote along with fellow industry man Cameron Giles-Webb, two of the songs which Rouvas sang to qualify for Eurovision, This is Our Night and Right on Time.

Rouvas performed the songs to hundreds of viewers in July last year on ERT TV, with 75% of Greek voters approving This is our Night as the hot pick to open Rouvas’s Eurovision performance in Moscow later this year.

The opportunity to write the lyrics for the songs arose when Porteils was approached by well-known Greek composer Dimitris Kontopoulos.

Kontopoulos, who has produced songs for Eurovision in the past, had already composed the music for Rouvas and was looking for someone to write the accompanying lyrics in English.

Giles-Webb, speaking from Queensland, said the pair, after landing the gig, set out to create lyrics that were upbeat and would appeal to European audiences.

“Europe, being a pop culture kind of place, we wanted to make the songs uplifting and positive for them,” he said.
“We sat down time and time again, listened to what we had, sung it. Random things would come up. Threads lead to new threads, we worked on it until something suddenly went boom.”

For over 25 years, Giles-Webb has worked with some of the country’s foremost bands including INXS. Today he continues to make music through his record label Gusto Music in Sydney.

Travelling to LA in the late 80’s, Porteils worked behind the scenes in music production and engineering.

His introduction to music came about by teaching himself to play guitar in his teenage years, leaving behind his  profession in carpentry.

According to him, the secret to writing songs is always maintaining a sense of fun, and this time around it was no exception.

“For me the intention was for everybody to love it and get it. Eurovision is obviously commercially great fun and I’m extremely excited we’re a part of it. It [writing the lyrics] was never serious, it was such good fun,” he said.

It’s the first time the pair has broken into the European market since they first started collaborating, on and off, in the early eighties and success keeps on coming.

Just last week, This is our Night entered the Lithuanian charts at number 38, a rare happening before the Eurovision contest.

Rouvas is currently in Romania appearing in various TV shows in the lead – up to the big night.

The duo will travel to Moscow for Eurovision in May, where they are set to meet Rouvas. Speculation abounds that the duo will work on Rouvas’ new album.
Eurovision airs on 16th May.