The one to watch 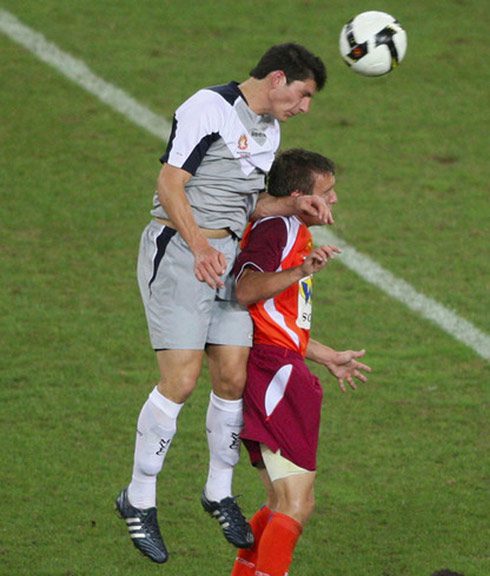 At the age of seven Stephen Hatzikostas developed a keenness for the soccer ball.  Cute, clever and kind he was, but an athlete? Far from it.

Stephen admits that his first few years of playing the world’s sport often left his parents cringing on the sideline.

A decade later, it is hard to believe that this 17 year old up and coming superstar was not born with a soccer ball attached to his legs.

“I was a shocking player from age seven through to eleven but I loved the sport so much that I just didn’t want to stop” Stephen tells Neos Kosmos English Edition (NKEE) in an exclusive interview.

To match his skills with his passion for the game, Stephen would dribble a ball all the way to school from his Box Hill South home.  He would play soccer before class, during his lunch break and after school until dark.

It is now obvious that his hard work and determination has payed off.  Stephen has now been signed with Melbourne Victory’s Youth Squad and has been scouted for trials around the globe.

“If there is one thing I could pass on to fellow Greek-Australian kids who want to make it in the soccer world it is to keep trying, we aren’t all born as naturals.  Practise, try hard and you will see results” Stephen said.

After beginning his bright career with the Eastern Lions and playing Futsal for the state team, the gifted 15 year old mid-fielder travelled to Germany with a team coached by former Socceroo Alan Davidson.  While he was abroad, he was seen by an AEK scout who immediately sent him to Athens to train with their side.

Upon his return Stephen was trialled and signed by the Victorian Institute of Sport (VIS).   It was here that he won the Vince Grella Encouragement Award (A best and fairest recognition).

This was not only an outstanding achievement but held even more esteem for Stephen as Vince Grella is his Australian soccer idol.

The same year Stephen was noticed by Melbourne Victory, who, on occasion used VIS players in their matches.  Amazingly, this bright young player was sent to showcase his skills in China with the Melbourne Victory Senior Team.

Stephen said that this experience was the highlight of his career thus far,  “It was a real insight into what it takes to become a professional footballer, and an invaluable experience.”

Furthermore, to make 2006 an even more awe-inspiring year, Stephen travelled with the VIS to play in the UK.

There, another scout was immediately impressed by our youngster, resulting in him spending the tail end of his trip training with English Premier League club Liverpool.

His clean skills and composure on the field with Melbourne also caught the eye of Oakleigh Cannons coach John Anastasiadis who was quick to secure Stephens signature for their senior squad.

When asked how he feels about his achievements to date, Stephen said “I think i’m doing ok, I am proud of myself but I know I have to work harder and harder to get where I want to be” he stated.

His parents Peter and Theona Hatzikostas  are much less modest about their son’s achievements,  “I am so proud of him.  His positive attitude, dedication and skill set have led him to where he is today and will hopefully see him get much further”  Peter said.

Not only is Stephen a talent on the pitch, but is equally as outstanding in the class room.

A year 12 student at Camberwell Grammar, Stephen is a high achiever who is receiving grades at the top end of his classes and aspires to continue his education with a Bachelor of Physiotherapy next year.

Stephen admits he often finds it difficult to juggle training, games, year 12 and a social life but thrives on prioritising each task and carrying it out to the best of his ability.

When asked what contributes to his success, Stephen was quick to answer.  “My yiayia’s cooking!   And of course hard work, determination, a level head and constant support from family, friends, peers and coaches”.

While his current success is humbling, this ambitious player is striving towards his future goals.  “I want to secure an A-League contract, preferably with Melbourne Victory and would love to play for Australia” he says.

The future is bright for this rising Greek-Australian star.

Soccer fans should keep their eyes out and keen young soccer players should follow in his footsteps which are paving the way for certain success.