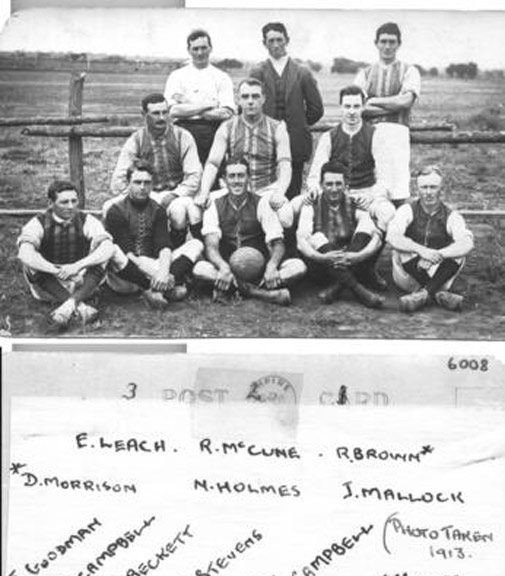 By now we are familiar with the Anzac Day Australian Rules football football rituals.

Since 1995, Collingwood and Essendon have battled for Anzac supremacy at the MCG.

It’s a tradition to which supporters of both codes have been drawn in vast numbers.

Both codes supplied a great many troops who served at Gallipoli, and across Europe, many of whom were never to return.

Collingwood lost six players, Essendon seven. So these clubs’ own histories add to the solemnity of Anzac commemorations.

Yet the round ball variant of football (soccer) made its contribution, too.

Prior to WWI, the game had undergone something of a renaissance.

Recovering from the depression and energised by waves of migrants, football was booming.

In Victoria, the Dockerty Cup (starting in 1909) had been a central plank in the game’s growth and club fixtures were regular. 1913 saw the reinstatement of the NSW-Victoria clash after 25 years.

Even though plans to form a national association were scuttled by the outbreak of war in 1914, the game soldiered on as best it could.

The annual international match between teams representing England and Scotland, under the auspices of the Victorian Amateur British Football Association took place on Saturday on the Fitzroy Cricket ground the authorities of which on this occasion granted the free use of the ground as net proceeds from the match were to be handed over to Lady Stanley’s fund for Wounded Australian Soldiers.

Yet it was clear that the war was taking its toll. The Argus went on:

Four of the players who took part in last year’s match are on active service, namely Lowe, Golding, Guthrie and Hyde, the latter of whom is at present in hospital at Plymouth, England, wounded.

Of those who took part in Saturday’s encounter 13 of them represented their various countries last year – seven for England and six for Scotland.

Three of England’s representatives and two of Scotland’s have enlisted and were relieved by their respective commandants to enable them to take part in Saturday’s match.

The strong commitment made by footballers to the war effort meant that the suspension of the game was inevitable. And by 1916 competition was ended, not to be resumed until after the war.

According to the Argus, when football did resume, in 1919: At the first annual meeting of the British Association, on June 16, the report covering a period of four years commencing 1915 disclosed the interesting fact that 90 per cent of the players had enlisted for service abroad or at home.

No competitive football had been played during the war.

Pre-war football had not only grown in the metropolitan region. It was taking root in the country as well.

It’s a fact little known that Mildura had a developing competition in this period.

Indeed, the little town of Irymple, just outside Mildura, provides its own story and gestures towards the general tragedy of war. Of the 11 players pictured in the Irymple team of 1913, five lost their lives.

It’s a story repeated across Australia, across sporting organisations of all codes.

The Irymple tragedy underlines a question that many in the football community have asked: why don’t we in football honour the Anzac legend with a celebration similar to those arranged by other codes?

This year the FFV has inaugurated a series of games to mark Anzac Day. Hume City will take on South Melbourne at Broadmeadow’s Valley Park for the right to hold aloft the inaugural Anzac Day Cup.

Green Gully and Heidelberg will meet in Bendigo. Perhaps in years to come the FFV might consider playing a game in Mildura to honour the story of the lost Irymple footballers.