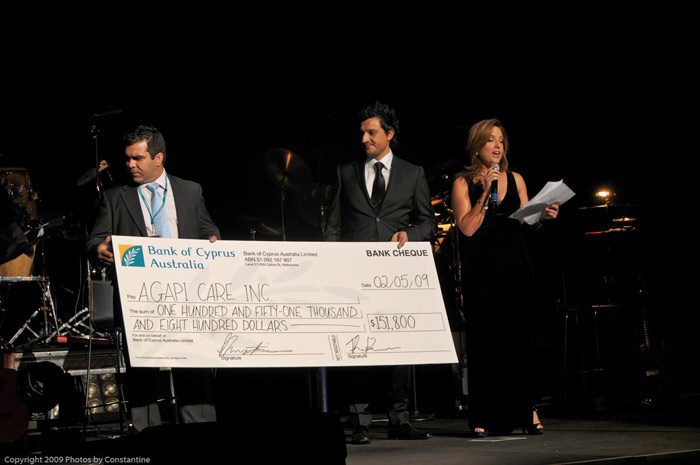 $151 800 cheque to Agapi Care from the Ploutarhos concert.

The organisers of the recent Yiannis Ploutarhos concert that was held in Melbourne, have announced that they donated $151,800 to the Agapi Care Foundation.

The concert that took place in Rod Laver Arena on Saturday May 2 was a great success attracting more than 7,000 people.

Greek pop sensation, Ploutarhos, stated that his core reason for performing in Melbourne was his commitment to the Agapi Care Foundation.

On the night of the concert the PanCretan Association also announced their contribution of $13,000 to Agapi Care.

Additionally, the Bank of Cyprus has also donated the amount of $100,000 to the Greek Australian foundation.

Neos Kosmos has been advised by the CEO of the company that organised the event that the the money donated will be utilised in the best possible way by Agapi Care.

Agapi has already purchased a home for the amount of $550,000 that will house Greek Australian with disabilities.

All these contributions will go towards the servicing of the loan needed for this purchase.

Neos Kosmos English Edition last week reported that only $13,000 was given over to Agapi Care when in fact Juggernaut contributed $151,800 as part of the income generated by the Ploutarhos concert in Melbourne.