Most people know of Greece’s ancient and Byzantine past, but few know its Medieval past. Anna Achiola is a visionary who created and has run Rhode’s Medieval Rose Festival every June since 2005. 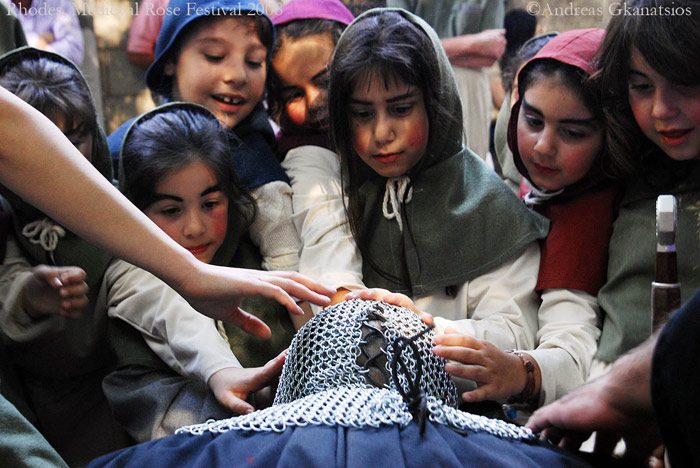 Standing on one of Rhodes’ eastern beaches you can see Turkey’s flank. It is a vision which reminds you why this island has been a crossroad of cultures from ancient to modern times.

Since I was a child, I loved the castles of Rhodes and dreamed of a revival of the Medieval Age, when all these stories about knights, ladies and witches were very real. – Anna Achiola Medieval Rose Festival director –

Rhodes, the largest island of the Dodecanese, is the meeting point of three continents.

Regardless of the island’s ancient moorings, the most characteristic part of Rhodes is its medieval old port, with its Palace of the Grand Master, the Street of the Knights, and the Old Town that is considered one of the best-preserved Medieval Towns in Europe.

The Medieval Rose Festival was the brain child of Anna Achiola the festival’s Creative Director and is held June.

“I think the idea existed in my mind from a very young age.” Achiola says to Neos Kosmos English Edition (NKEE).

“Since I was a child, I loved the castles of Rhodes and dreamed of a revival of the Medieval Age, when all these stories about knights, ladies and witches were very real!”

To dream of a celebration is a far cry from the challenge of creating, running and funding a festival, as Achiola says, “Of course, (at) that time I hadn’t thought of a Festival. This happened one night, about five years ago, when I decided that I wanted to do something more creative in my life because the job I was doing was rather dull and boring for me.”

As usual many major passions begin as hobbies but Achiola soon realised the scope of the idea and contacted friends who could contribute.

As she says, “The response was extremely positive and so we founded the association Medieval Rose in 2005, because the Medieval Festival should be an offspring of team work to develop well.”

She adds, “This is a very tempestuous period in the history of our island, full of wars, conflicts, plundering and death. The Black Plague which devastated Medieval Europe also reached our island.”

From 1309 to 1522 AD Rhodes and the other Dodecanese islands were administered by the Order of the Knights of Saint John of Jerusalem, known today as the Knights of Rhodes.

This was a multinational order consisting of seven nations and thus speaking seven languages. The Knights are few in number, only 500, and mostly Franks who resided on the island.

But, within the walls of Rhodes there lived and worked more than 4,000 Europeans along with local residents and Jewish and Armenian minorities.

This multicultural society lasted for 213 years and many languages were spoken, including Greek and all the languages of the Order of the Knights and Latin, which was the official language of the Order.

“In this multicultural society, you can add the trade between Knights, Turks and the Egyptian merchants who would arrive on the island,” adds Achiola.

Rhodes was the last European territory that resisted the Ottoman Empire, since Constantinople, the capital of the Byzantine Empire, had fallen in the hands of the Ottomans in 1453 AD.

The Crusaders had also lost their territories in the Middle East. Rhodes had suffered a siege by the Ottomans in 1408 AD.

“However, it didn’t manage to survive the second siege of the Ottomans in 1522 AD and the town fell, after a long brave fight and betrayal,” said Achiola to NKEE

Adding, “The Knights left the island along with 4,500 inhabitants and the Medieval Era of Rhodes officially ended.” UNESCO protects Rhodes’ Old Town as a unique and intact medieval city;

“Our Byzantine-Medieval cultural and architectural heritage constitutes a unique setting to host such festivals that aims not only to entertain the attendants but also to report on the unique history of our island,” underscores Achiola.

Over 150 volunteers take part in the event every year, and last year more than 50 artists and re-enactors from Greece and Europe took part and the countries that participated included Italy, France, Germany and Portugal.

As in all endeavours of this nature funding is always an issue, as Achiola points out to NKEE: “The Festival is an expensive event that needs more support from the local authorities.

“Up until now most costs were covered by voluntary work, sponsorships and in a small part by finances from the local government.”

She adds, “This year, for the first time, financial support is coming in a large part from the Municipality of Rhodes and Ataviros (castles of Monolithos and Kritinia) as the Festival becomes a trans-municipal effort.”

The local and international dimensions of this project are not lost on Achiola: “We want every year to add the castle of another municipality in the Festival in order to promote our Byzantine architecture heritage in its whole.

“Medieval Rose also organises educational tours in the Old Town and the Palace of the Knights, while every year it travels to different medieval festivals of Europe for the development of an intercultural dialogue.

“Last year, Medieval Rose took part in the Fairy Tales Festival of Kea, organising a team game for the Search of the Dragon, beginning thus a new cooperation with another island of the Aegean,” Achiola said enthusiastically.

Achiola sees a synergy between arts, heritage and folklife; as well as environmental concerns: “We became a member of the WWF Hellas and aim to develop cultural actions with focus on the environment.

“It is also a member of the Anna Lindh network for the promotion of intercultural dialogue and of the Inventory of Heritage Organizations for the preservation of the cultural in heritage.”

The Medieval Rose Festival’s next goal is to cooperate with other European Union members and Mediterranean countries in community cultural development programs- something which in the current global recession will do much towards building community well being and creating jobs in the cultural sector.

The Medieval Festival takes between June 19-28, for more information go to www.medievalrose.org/Eng/default.asp