Oncologist Dr George Kannourakis was one of the recipients of the Pride of Australia Awards 2009. 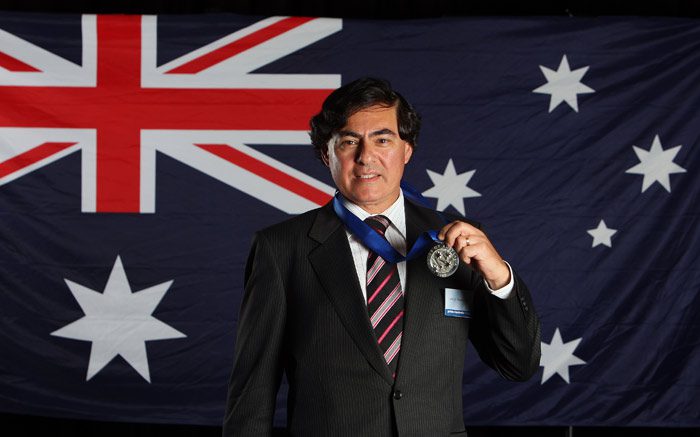 Greek Australian oncologist George Kannourakis from Ballarat was one of the recipients of the Pride of Australia Awards 2009, during a special ceremony that was held at the MCG Olympic Room last week.

Dr Kannourakis received the “Care and Compassion Medal” in recognition of his significant contribution as a medical professional to the improvement of the lives of those around him.

The Pride of Australia awards honour everyday Australians who do extraordinary things in their respective communities and whose contribution to the Australian way of life is not widely known or recognised by the general public.

In its fifth year, the program continues to uncover countless stories about great Victorians. These people were nominated by readers of the Herald Sun and the Sunday Herald Sun.

The managing director of Herald & Weekly Times, Peter Blunden said regarding Dr Kannourakis’ nomination: “People such as George Kannourakis, nominated for the Pride of Australia medal, are a powerful affirmation of the decency and goodwill that is paramount in the community.

“George was a standout winner who has shown enormous dedication to regional Victorians delivering good old fashion service to each and every one of his patients,” Mr Blunden added.

It should be noted that amongst other things, Dr Kannourakis’ dedication to his patients includes his selfless offer to visit them every fortnight.

Dr Kannourakis said to Neos Kosmos English Edition that he was humbled by the award and pointed out that it came as a surprise. “It was a bit unexpected because I’ve been doing this for many years now… going up to the western district clinics in Horsham, Stawel and Ararat… I just assumed that it was part of my work… and it means that a lot of patients don’t have to travel to Ballarat and Melbourne for treatment.”

Dr Kannourakis has been practising in Ballarat since 1996. Before that he was a paediatric oncologist at the Royal Children’s Hospital.

He spent two years in Boston doing research at Harvard Medical School and shifted to adult oncology and haematology which sparked his interest in providing a regional rural service to cancer patients. He is the Director of a Cancer Research Unit that operates in Ballarat.