Fear and grannies on the road to Kefalonia

A journey to the Ionian island of Kefalonia by GIORGIOS ZEKAS was full of surprises and adventures. 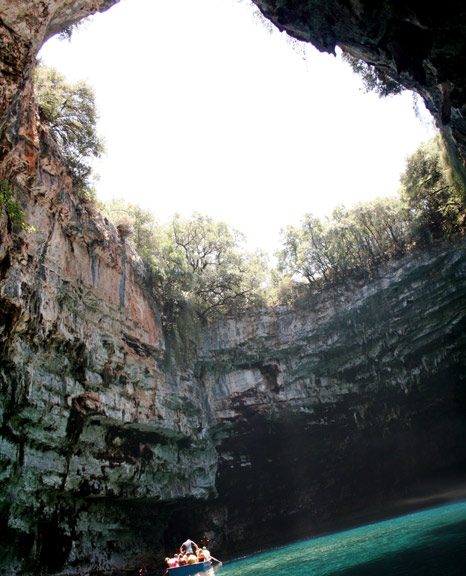 Let me start off by warning all you young people out there:

No matter what your ticket stub says, it’s very important to your health that you never allow yourself to be sandwiched between two old Greek grandmothers on a bus ride longer than five minutes.

Trust me, it’s painful. I speak from experience.

It all started innocently enough.

I went to the main bus station in Athens very early last Thursday morning and purchased myself a ticket for the 8.45am bus to Kefalonia.

Oh, but how does one get to Kefalonia, an island, by bus, I hear you ask.

Trust the Greeks! A bus takes you to the port of Patra and from there it’s a quick ferry trip over to Sami in Kefalonia, then back onto the bus before you finally disembark in the capital of Kefalonia, Argostoli.

But that’s still a long way off yet.

I climbed aboard the bus, only to realise it was packed. I was shocked to find my co-passengers, almost all of them Greek, actually taking their place in their allocated seats.

With Prince blaring out my iPod I took my place in what seemed the ideal spot, the middle seat of the last row. The entire back row was vacant.
“Super!”, I thought to myself, “more room for me”.

However my enthusiasm was short lived. Just moments before departure, I suffered two deadly blows.

The first was when two elderly ladies, both on the larger side, occupied the two seats to my left, almost pushing me against the right-sided window.

I took a deep breath to relieve the frustration and tried to calm myself while listening to Let’s Go Crazy.

Just as I convinced myself that the three-hour bus trip would go in no time, along come another two more portly and elderly women, who occupy the two seats to my right.

I was trapped in Greek granny hell!

Things got worse. The four of them decide to re-enact the best moment of the WWF by having a verbal tag team smack-down about which of their villages was better, whilst I am crammed between them, reduced to just 47 per cent of my seat.

We finally arrived in Patra. To escape their heady body odour, which magically combined cleaning products, cheap perfume, fried olive oil and sweat, I somehow managed to jump over seats and anyone or anything before me to exit the bus.

Having made my escape I drew a deep breath of fresh air and paid tribute to the elemental pleasures of life.

Bathed in sunlight  it was hard to stay angry as we took to the seas. But I had already decided I would not continue through to Argostoli.

When we finally arrived at the port of Sami, I grabbed my stuff and called my brother, who was waiting for me at Argostoli, to come and pick me up.

There was no way I was getting back on that bus to be squashed by those old women.

Things got better in Kefalonia. Its hard for them not to on this gorgeous island.

The largest of the Ionian Islands, Kefalonia is a popular destination for travellers. It’s diverse and dramatic scenery, combined with many wonderful bays and inlets, help form its unusual shape.

Once my brother and his wife had picked me up, we headed straight for the the island’s most famous beach Myrtos.

A wide sandy beach that features in many travel brochures, and it’s easy to see why.

The warmer waters of the Ionian, combined with the amazing colours of the sea here making swimming in Kefalonia an absolute joy.

Having sampled the best beach on the island, we now set out for what proved to be our favourite village, the picturesque Assos.
Built close to a gorgeous bay, Assos is exactly that, ace.

Having lunch at one of its seaside tavernas could make anyone forget their problems and lose themselves in the tranquility of the place.

That is until some newly arrived migrant who has somehow strayed to this remote little place tries to sell you an umbrella or the new Anna Visi CD for five euro.

My second day in Kefalonia started with a trip to the Melissani Lake Cave, one of the most significant sights on the island. According to mythology, caves have always been associated with the divine due to their enclosed beauty with the result that they were the most suitable places for religious ceremonies.

Melissani has its own myths; the locals believe it is named after a shepherdess called Melisanthe who was looking for her lost sheep and fell into the lake and drowned.

Another myth refers to the nymph Melissani who committed suicide in the Lake because Pan would not reciprocate her love.

Myths and tales aside, the cave itself is an awe-inspiring spectacle.

We were given a guided tour by boat, our guide switching between Greek, poor English and what sounded like even worse German, (although that language always sounds wrong to me).

Despite the odd sounding guide and the nutty German tourists trying to rock the boat, I could not help but be amazed by the colours that surrounded me as the sunlight flooded the cave through a hole above us.

We headed out to Antisami beach, where my brother and I decided to enjoy the water sports on offer.

To be precise I let my brother talk me into sitting on an inflatable device, called a water doughtnut, which rushed us around the bay like a speed boat.

Things were problematic – this adventure had disaster written all over it, especially as the driver of the boat was a 26-year-old bikini clad, margarita swilling thrill seeker named Maria.

Not content with just letting us have fun, Maria was hellbent on seeing us crash and burn. She made sure we did not hold on for the whole trip by going as fast as she could and by turning suddently, without any warning.

It wasn’t long before I went flying, crash landing into the water. Although hitting the water hard hurt, it really was a great deal of fun.

With my knee and, more importantly, my ego bruised and battered, we left Antisami and headed for Skala.

Another beautiful part of this island, were it not for the hordes of English tourists.

Their beetroot red sunburnt faces and thick, heavy accents are always good for a laugh. However add the drama of watching the first Ashes test match against Australia on television and you have a recipe for a top night out (at least when Australia is doing well, which I am glad to say they were).

So my advice for travellers to Kefalonia is simple: Don’t catch buses with Greek grannies; be kind to margarita swilling women called Maria; don’t rock the boat because the Germans will get you; drink lots when you are watching the Ashes cricket with the Poms and enjoy the beaches and inlets on this beautiful island.