Regardless of pain George The Iron Lion Longinidis fought hard and won the WOKA world title. 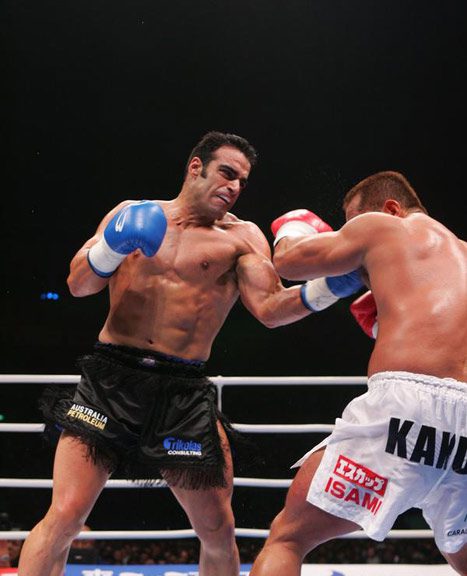 George (The Iron Lion) Longinidis took the World WOKA Heavyweight Kickboxing Title by defeating Ramba (M-16) Sithsiamboh the Asian champion from Thailand by unanimous decision on Friday night but at a great cost.

Longinidis said to Neos Kosmos English Edition, “The bout was a test of wills…I had to dig deep as I ruptured my shoulder tendon in the very first round.”

The pain was intense but as Longinidis highlighted “I was fighting with one arm and at 50 per cent of my total ability.

I just did enough to win each round in my mind and could not wait until the bell sounded for each and every rounds end.”

Respect was not diminished for his oponent the Asian World Champion,  “Ramba kicked harder than any man I have faced and he definitely proved himself worthy.”

But the title did take its toll, “I am currently hospitalised awaiting surgery to repair my ruptured tendon and torn muscles in my chest which was caused by me throwing extremely forceful blows and the impact of which causing the severe injury.” said Longinidis.

He added, “Truth is, I pulled the tendon and muscles five days prior to the fight but there was no way I was pulling out of this once in a lifetime opportunity. I knew this trauma would occur but in the end it was all worth it.”

An elated but pained Longinidis shouted from his hospital bed, “I am now the heavyweight champion of the WORLD!”