As visitor numbers soar to Greece’s most southerly island off the coast of Crete, creating sustainable tourism is the only way for the island to retain its unique identity and natural resources. 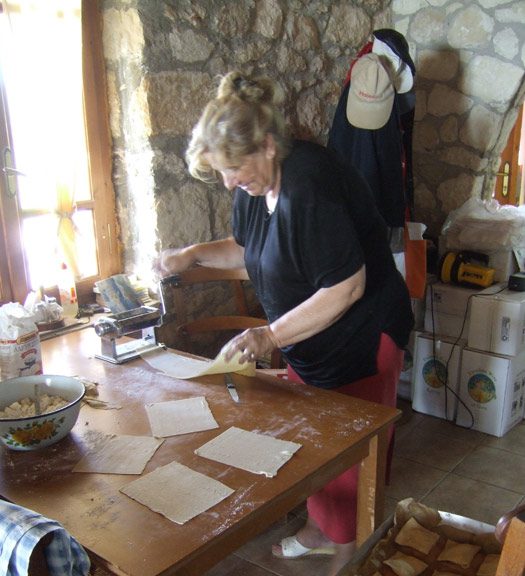 In late July there’s no shortage of takers for the two-hour journey to Europe’s most southerly outpost, the tiny island of Gavdos, 48kms off the south coast of Crete.

The Samaria ferry which plies the iridescent blue water from Paleochora, arrives at the jetty on time, and the assembled throng of backpackers, trucks loaded with building materials and fuel, and minibuses carrying an older generation of traveller, is eager to get out of the unremitting Cretan sun and reach the shade on board.

Gavdos, with just 45 permanent residents and encompassing only 36 square kms, has achieved an almost mythic status as the last ‘undiscovered’ island retreat in Greece, untouched by mass tourism.

For years Gavdos was the preserve of a few hardy independent travellers, who rocked up on Sarakiniko beach to camp and sleep for free under the trees and a canopy of the brightest stars in Europe.

But today it’s a different story. That traveller demographic still comes, but in much greater numbers than ever.

This influx is bringing with it increasing commercial opportunities, but huge challenges for the island and those who have its best interests at heart.

I’d booked accommodation at Sarakiniko described as a ‘studio’ – two beds with kitchenette.

“It’s the best rooms you can find on the island” said the Athens-based agent.

But as we were shown to a small terrace of stiflingly hot, depressingly dark rooms on high ground way back from the beach, 25 euros seemed a lot.

No fan. No air con. A battered fridge with no power.

“The electricity will be on this evening for a few hours” said the agent’s tanned and pony-tailed property manager.

With the look and feel of one of those complexes built by the US military to practice urban warfare in a third world country, the thought of my five-year-old son and I spending the night here was, let’s say, unappealing.

Perhaps the famed Sarakiniko beach, stretching along Gavdos’ northern coast, would be a redeeming factor. It wasn’t.

Four-wheel drive vehicles nestle with the tents under the trees. Our visit isn’t made any more pleasurable by a fierce burning wind that scythes across sand. Leaving ‘the room’ brings a feeling of elation and escape. I offer to pay for the night booked.

“What’s the problem?” the agent asks. I respond by saying we want something more suited to our needs. “You don’t like it – fine” the agent replies abruptly, terminating the call.

Relieved to be away from Sarakiniko we drive up 4kms to Kastri, the inland capital and find a different approach to hospitality in Gavdos.

George Papadakis began construction of the Princess Apartments in 2002.

Built of local stone and timber in a traditional design, the six apartment houses and restaurant is the start of a vision to nurture something special for Kastri, whose only remaining original inhabitant is his father Vassilis.

“I like to do things legally” Papadakis says, referring to the many illegal constructions that blight Sarakiniko beach.

“They say a crazy man put a lot of money to do something here in Kastri. But I like this…”, he adds with a smile, going on to tell me how some of his more unscrupulous competitors have tried to thwart his plans to develop the apartments.

An additional benefit of Papadakis’ approach, is that his apartments, which can sleep four comfortably for a total of 60 euros $AUD103 per night in the high season, are able to use the island’s official 24 hour electricity supply, available to those who go through the correct channels.

As we spoke, George recounted the extraordinary story of how three Russian scientists who had been working at Chernobyl at the time of the accident in 1986, came to Gavdos seeking a refuge, where they could benefit from the natural healing powers of climate and nutrition.

Today they still live with their families in the village of Vatsiana, their properties clearly identifiable with an array of eccentric sustainable energy contraptions on show.

Gavdos, its pristine natural environment and isolation, draws people to it.

But today there has to be an agreement by all those involved, to protect and manage development on this precious isle.

In 1996 the Greek government, following claims on the island by Turkey, invested significantly in the island’s infrastructure.

The tiny port of Karave was improved dramatically, roads were built, a power generation system was put in place, the historic lighthouse at Vatsiana restored.

Future sustainable development rests on private commercial operators and their willingness, or not, to do the right thing.

Papadakis’ grandfather was the village priest in Kastri. As the German occupation reached Gavdos in the summer of 1941, his grandfather was the one who negotiated with the invaders outside his simple stone home, to secure the safety of the then 300 families who lived on the island.

Mike Sweet is a features writer living in Greece and contributes regularly to NKEE as well as other European publications.