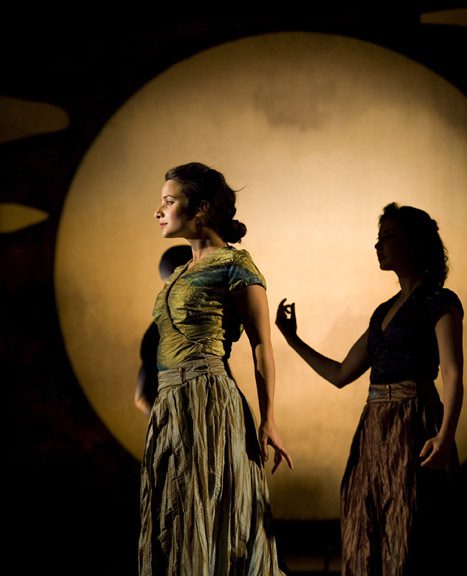 Andrea Demitriades is so comfortable in her own skin it makes it difficult to define her. But on stage you can see her true self: in her element, content where she is at and optimistic about the future. Performing with Bell Shakespeare is by no means a small feat.

Andrea Demitriades is a young Greek-Aussie actor from Perth who performs as Marina in Pericles, a Bell Shakespeare production currently in Melbourne.

Itís not her first time working with Bell Shakespeare – one of the most respected theatre companies in Australia – as she has also toured with the company’s  Actors at Work ensemble performing Shakespeare to schools.

The last three years have been an uphill road for the 25-year old who has made appearances on film, television, All Saints among them, as well as theatrical productions.

Pericles is the highlight of her career thus far but she talks about it as if it was a natural progression. She certainly sounds like someone with enough maturity to know that being selective could be a difficult choice but one that pays off.

The young actress chose to follow acting after flirting for years with dancing, entertaining the idea of becoming a biologist and spending two years studying communications at Curtin University.

She talks about acting as being her element; the medium she feels she can use to tell stories. She talks with disarming youthful amazement of what appeals to people in life.

“When you find your element you are drawn to it and you have to give it a go,” she said.

NIDA has a rigorous selection process with only a handful candidates from the thousands auditioning across Australia gaining entry to the school, which counts accomplished actors like Mel Gibson, Cate Blanchett, Richard Roxburgh and Hugo Weaving amongst its alumni.

The move to Sydney from her hometown of Perth was a challenge in itself but one she was happy to make knowing that she leaves behind a supporting family. “It would have been very difficult for me if I didn’t have the financial and emotional support of my family, especially my father who was always supportive and encouraging in whatever I chose to do.”

Demitriades says, “I am so lucky to have open-minded parents. You need people around you to put things in perspective because the road you choose, it will not always be smooth.”

Her diminutive appearance and effortless charm could make anyone believe that she will be cast in roles of innocent, sweet little girls but watch her on stage and you will see that she will make a mean Medea.

As Marina, Pericles daughter, she is far more convincing as a virgin trying to survive in a brothel and she draws out of her owner the cry “Won’t you do the ways of the women?” rather than the daughter reunited with her father.

“It’s not difficult being dramatic when you are Greek and the youngest daughter in the family – I had to do a lot of crying and screaming to be heard when I was growing up with three older sisters,” she comments with good humour and takes the opportunity to add how much she misses her family.

Demitriades has the charisma of connecting with everyone she looks at but she attributes her skills to her training:

“If you tell the story well, youíll touch the audience,” Demitriades says, “you can take them on the journey and hopefully give them an experience that will stay with them.”

It is easy to see that she enjoys what she does and she approaches her work with respect and love, “playing interesting characters and telling the story well,” are what she focuses on rather than worrying about the future and its uncertainty.

The prospect of theatre not working out does not upset her. She knows what the next move would be: ìIíd like to open a cake shop,î she says. ìI love making theme cakes! The other day I made a train cake for one of the cast members.î

It is a rather unexpected response but she says it with such dramatic flair that she is utterly believable!