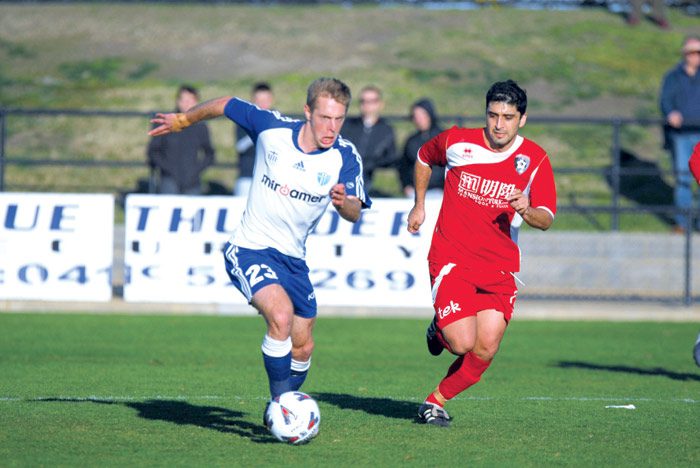 Two strikes at the start of each half, has seen Hume City triumph 2-0 in the Elimination Final at Epping Stadium on Sunday.

Both teams came into the contest in a confident mood, with South coming off a hard fought victory against Sunshine last week.

Despite losing last week, Hume would come into the game knowing that it defeated South only a month ago at Bob Jane Stadium.

In fine but blustery conditions, Hume began the game in an exceptional manner scoring the stunning opener in the opening minute.

The goal came after a poor clearance by young goalkeeper Stefaan Sardelic was intercepted on the left hand side by veteran Tony Sterjovski.

With the defence retreating, Sterjovski played a lovely ball into the path of Zoran Petrevski, who with the aid of a deflection cut the ball back into the oncoming Alfonso Opazo.

With the wind behind him, Opazo slammed the ball into the roof of the net to give his side the early lead.

Hume continued the early dominance and could of doubled their advantage in the 7th minute when the ball fell to Ross Thompson just outside the area.

With the defence sitting back, Thompson opted to hit a speculative long-range attempt at the target.

Unfortunately for the midfielder, the wind caught the ball from the outset and subsequently the shot flew just over the bar.

It took 15 minutes until the nervous South Melbourne side began to come out of their shell and was denied superbly in the 21st minute of play.

On this occasion, a superb ball from the left hand flank saw Gianni De Nittis win possession inside the area.

From the resulting headed ball, Fernando found himself one on one with Acevski. Coming off his line quickly, Acevski managed to throw everything into the path of Fernando’s shot to produce a world class save from point blank range.

South should of equalised in the 35th minute when a sublime flick and run by De Nittis bamboozled Serder Pir on the left flank.

After surging into the area, he then squared the ball into the path of the hard running Goran Zoric.

With the keeper beaten and with Zoric inside the six yard box, the ball amazingly was turned into the opposite direction to the goal by the diminutive attacking player.

Sterjovski for Hume had the final chance of the half, being thwarted acrobatically by the young goalkeeper Sardelic, after his free-kick was steered onto the target from just outside the area.

The second half started in almost identical fashion to the first half, with Hume exposing a laconic South side just after kick-off to double their advantage.

On this occasion, a sensational ball by Pir from the right hand side found the unmarked Andy Vlahos inside the area.

With the South defence nowhere to be seen, Vlahos expertly nodded the ball past Sardelic to silence the strong South Melbourne traveling contingent.

South fans and players alike were stunned and it didn’t take until the 70th minute for the Blues to muster a series of attacks onto the Hume goal.

With Vaughan Coveny lifting himself and the team, he was denied twice in quick succession by Acevski, who was proving to be the difference between both sides.

Acevski continued to thwart South at every opportunity and produced the save of the game moments later when he acrobatically turned a Steven O’Dor opportunity over the bar from close range.

With only the keeper to beat, O’Dor’s effort looked goal bound, until Acevski produced a piece of goalkeeping brilliance to deny him.

South continued to push forward at every chance but it was all in vain, with the referee blowing time on the Blues season.

With the brilliant win, Hume would go on to play Green Gully next week in another cut throat elimination final.

Highlights of the game can be found at www.smfc.tv.