A wedding of three cultures

For Nadi and Spiro Pyrlis, three weddings, two countries and 250 guests, were part of the challenge and excitement of incorporating vibrant Indian, Persian and Greek marriage ceremonies. 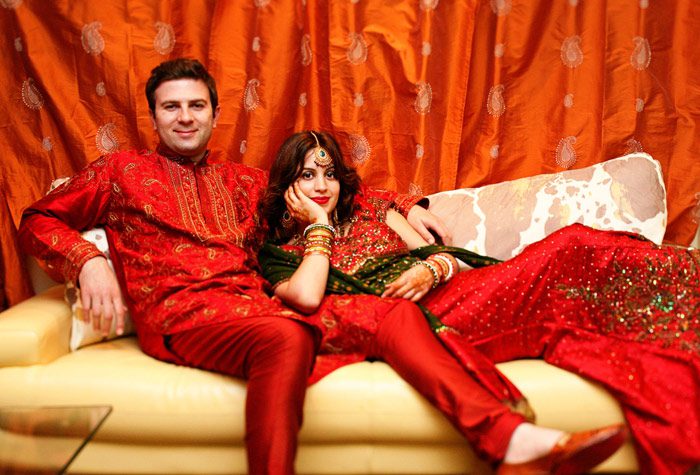 I sit down on the leather couches of a new suburban unit in Murrumbeena talking to newlyweds, Nadi and Spiro. I am admiring the young couple sitting hand in hand. Yet, there is something ancient about this meeting.

Spiro, a Greek, falls in love with Nadi, a Persian-Indian; this could easily be one of Alexander the Great’s generals falling in love with an Indian-Persian princess. Yet, it is a 21st Century Australian story; a multicultural reality.

Nadi with dark hair, Persian complexion and large brown eyes was joined to a tall and handsome Spiro.

A smile was cut across his face every time he stole a glance of his love. They were smitten. So much so that they decided to marry three times.

Nadi laughs, “It wasn’t planned!” she says. “We were planning to have a Greek Orthodox wedding here (in Melbourne), until my parents, who live in Mauritius suggested that we have some of the ceremonies there.”

“Little did we know that her father was organising all these incredible parties,” says Spiro, almost theatrically.

If the act of a wedding is high theatre, this was theatre at a grand and exotic level.

Set on the paradise island of Mauritius, Nadi and Spiro’s five day wedding celebration incorporated a fusion of three ancient religions and cultures, all linked by eternal music and dance; the common and ancient beat of love.

“Nadi’s dad, Arvind, is Indian-Mauritian of Hindu faith. He organised a Hindu wedding, and Nadi’s mum, Havva is Persian-Muslim, so we had a Persian ceremony too,” explains Spiro.

The family home in Mauritius was crazy for the entire week. It was overrun by twenty family and friends from Iran, India and Australia all under the one roof.

“Literally every other night, after a ceremony, or before, there were the parties… not a moment [of] rest!” says Nadi.

Day 1: Eve of the Wedding: The Sangeet

The Sangeet, meaning night of song and dance is an Indian pre-wedding ritual aimed at heightening excitement. The Sangeet party comes the night before their Hindu wedding.

This is a non-stop singing and dancing affair.

Nadi wore a red choli with a long, matching skirt, complete with a beaded shawl, bangles and a bejewelled headpiece.

The main event was Spiro, the peacock, replete in red salwar kameez.

“For Iranians, the groom is the king” emphasises Spiro, “so when I entered the party, 40 people shouted, ‘the groom is here!’

Then they started dancing and singing around me. I felt like royalty.”

The wedding began in the morning with a small religious ceremony at the house. Spiro and Nadi were anointed by two Hindu holy men known as Prabhas.

The Prabhas dabbed them with a yellow turmeric paste, which Nadi explains had the purpose to “bring luck to the marriage.”

Although sitting back to back and only centimetres apart, the bride and groom were prohibited from looking at each other until the final ceremony.

“It’s meant to build up anticipation,” explains Nadi, who admits she did sneak in a few looks at Spiro, who apparently, “took the tradition very seriously.”
In the evening ceremony, Spiro was asked to mark his bride’s head with red dye concealed behind a green head scarf.

This act of ‘marking the groom’s territory’ signifies to Hindus that the couple are now married.

“Seeing Nadi for the first time was amazing,” exclaims Spiro. “I was stunned at how beautiful she looked in her outfit, the most phenomenal wedding dress of them all.”

The ceremony was followed by a vegetarian feast of curries and rotti – more singing and dancing!

What’s a wedding without drama? That very night thieves broke in and stole jewellery and gifts that guests had brought. “Police came to the house in the morning and everyone had to be fingerprinted,” said Nadi.

The event prevented Nadi’s parents from coming to Australia for the Greek wedding. But the good news is that some of the gifts have been found and police believe they are close to finding the culprits.

This time it was the Greeks’ turn to show the Persians and Mauritians how they party. Spiro and his two close friends,

Steve Maras and George Giannakoudakis hit the dance floor with a zembekiko around a bottle of whisky.

Spiro’s sister Dina, and brother Alex led the dance-enthusiastic Persians around in a circle while fire eaters and belly dancers entertained the rest.

The final wedding ceremony in Mauritius was held at the Hilton. It began at dusk with a cocktail party on the beach followed by a traditional Persian ceremony.

Mauritian Seca dancers weaved around Spiro and Nadi as they made a grand entrance into the hotel reception.

“We sat on two chairs surrounded by spread of white and silver gifts that guests had brought from Iran,” says Nadi. “Each gift had to start with the letter ‘S’ and represented something.”

Spiro was then led to dance floor for the Persian Knife Dance. Persian girls danced around him in a faux seduction waving the wedding cake knife to the beat.

Spiro had to ‘pay them’ for the dance and it was not until they were ‘satisfied’ that they handed him the knife. This traditional ritual dance denotes the end of bachelorhood for the groom.

The wedding culminated in a colourful whirlwind of Persian dancing; a fitting end to a long week of Oriental passion.

Spiro and Nadi arrived back in Melbourne only two days before their Melbourne wedding.

“We were still jet lagged and we hadn’t written our wedding speeches,” says Nadi.

The wedding ceremony was held at St John’s Greek Orthodox Church, Melbourne, followed by a reception at Quat Quatta, Ripponlea House. “It was right up there with the Mauritian weddings,” smiles Spiro. “We had so much fun because we got to see all our friends and family, some that we had not seen in 10 years.”